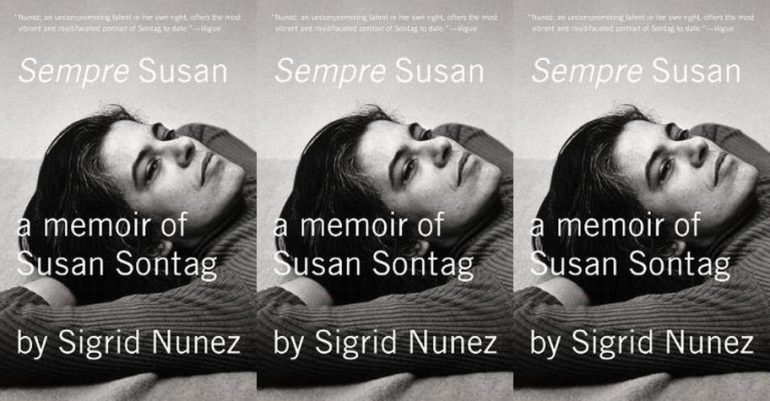 Memoir, by its very nature, is a genre dedicated to writers trying to illuminate some aspect of their selfhood—overcoming challenge, for example, or exploring a meaningful relationship, loss, discovery, or journey. At the center of each page is the author, revealing herself to her readers as the main character in her book as in her life. Sigrid Nunez’s Sempre Susan, a memoir of the author’s relationship with Susan Sontag, the writer and doyenne of the twentieth-century New York intelligentsia, plays with this concept of the memoir genre. Nunez largely disappears from her own pages as she explains, through vignettes and remembered lines, Sontag’s mentorship, beginning in 1976. What emerges is a series of impressions Sontag left on Nunez of her brilliance, inconsistencies, and legacy. Nunez’s own vanishing from the book’s pages results in an utter lack of editorializing; the reader experiences Sontag’s advice and opinions as Nunez must have, without Nunez’s own filter or emotional journey to distance us from Sontag’s wisdom.

There are few examples of women mentoring women across literature and film. Meg Wolitzer’s The Female Persuasion shows a young woman’s longing for the attention and wisdom of an older feminist. In the tradition of the style of mentorship we see in, say, Dead Poets Society, though, we see little representation of older women teaching younger women how to aspire to greatness. Instead, recent literature has been about friendship between peers and what each woman learns from the other. From Elena Ferrante’s My Brilliant Friend to Ann Patchett’s Truth and Beauty and Julie Buntin’s Marlena, readers can chart young women teaching each other through a series of trial and error but without the learned discernment that comes from years of experience, passed from one generation to the next. In that way, Sempre Susan both fills a gap and serves as a model for this type of relationship.

Nunez first met Sontag the year after completing her MFA program at Columbia, when she was 25 and Sontag, then 43,  was recuperating from breast cancer and a mastectomy. Nunez was working as an assistant editor at the New York Review of Books where Sontag was a contributing editor and learned that Sontag was looking for an assistant to help her with her correspondence. Nunez showed up to Sontag’s large penthouse at 340 Riverside Drive where Sontag served her Cream of Mushroom soup she diluted with milk. The rest, as we learn, is history.

Sontag encourages her son, David Rieff, who is visiting his mother from Princeton, to date Nunez, and a few months later, Nunez moves in with the two of them. What results is a strange and instructive, often cozy and often competitive, threesome. “When she came home, though it was late, though David and I might be already in bed, she would knock. ‘May I come in?’… (The shyness in her voice through that closed door was heartbreaking),” Nunez recalls. “She would settle on the sofa, light a cigarette and begin telling us all about her evening. I sometimes fell asleep while she was still talking.”

Thanks to Sontag, Nunez tries sushi for the first time and watches the films of Jean-Luc Goddard and Yasujirō Ozu, and goes to Studio 54. “She was naturally didactic and moralistic; she wanted to be an influence, a model, exemplary,” Nunez writes. “I cannot recall a single book she recommended that I was not glad to have read.” Nunez learns Sontag’s lessons on the craft of writing (“‘If there’s one thing modernism has taught us, it’s that speed is everything’”) but more notably on the role of being a woman writer. “For most of her life, she felt, her work had not been fairly rewarded,” Nunez observes. “She had no real financial security until she was well into her fifties.” Sontag is generous and forceful with the lessons she imparts to her protégé, but she is also needy, scared to be alone, and has an insatiable appetite for reading. Nunez’s criticism of Sontag is unremittingly laced with her worship.

The lessons on writing Sontag imparts to Nunez are often about the posture of public intellectualism but are at least as instructive as her lessons about life. Sontag’s sadness and rage made her lash out in a SoHo coffee shop she loved to visit; the wait staff asked her not to return. Sontag tells Nunez she should not own “so many pairs of underwear,” but should instead “own just one or two pairs and wash out the ones you wore during the day before going to bed each night.” Sontag learns to survive in unconventional ways. She never learns to cook and at one point eats an entire package of bacon for dinner, but her ex-lover, French actress and producer Nicole Stéphane, would “take a black Magic Marker and write ‘Susan Only!’ on various items in the fridge” that Stéphane had made for Sontag. Nunez watches Sontag err and succeed, teaching her that being human imparts at least as many lessons as being intellectual.

By writing a memoir centering Sontag rather than her own reactions to Sontag’s foibles and wisdom, Nunez lets us benefit from the mentoring too, in an act that illuminates the complexity, contradictions, and brilliance of one of the twentieth century’s greatest minds. Sontag’s unhappiness and fear are all the more striking because of the intimacy memoir allows. We see Sontag not as she presented herself on the page but as Nunez presents her on the page after years of learning from her personally.