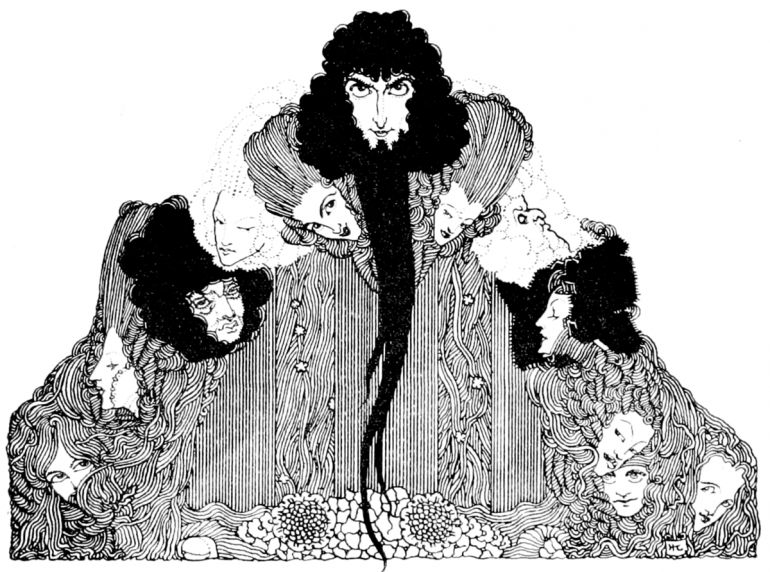 Women in stories often get punished. In fairy tales, it’s often for greed or pettiness or vanity or a slew of other reasons. But the heroines of fairy tales also get punished: they have to go through trials, their hands are cut off, they can’t speak for seven years. In many of these stories, there’s some moral at the heart: be good, be good, and eventually you’ll be saved. But there’s one story that I’ve been thinking of more and more, especially as many of women’s rights become more and more in danger. It’s the story of Bluebeard, which people often interpret as a tale about the morality of curiosity: Do what your husband tells you, and this will never happen to you. Except, even if the heroine of “Bluebeard” had never opened that door, had never seen all those bodies of previous wives, she still would have been married to a man who will kill a wife and keep her body because she didn’t follow one of his arbitrary rules.

I looked at two different versions of the story to see if I could kind find other lessons in it, to see what was hiding behind the story’s door.

In Jack Zipes’ translation of the story recorded by Brothers Grimm, darkness is peppered throughout, well before the darkness of the castle arrives. The young maiden is pressured by her father to marry a suitor she can’t help but feel frightened of. Within the space of four paragraphs, she has been married and her husband is setting off on a journey. He leaves her with his key ring and forbids her from opening one single door in his home. Of course, as we all know, she opens all the other doors. Then, curiosity gets the best of her, and she opens the final door: “a stream of blood flowed toward her, and she saw dead women hanging along all the walls, some only skeletons.” This is paragraph five in the story. What Zipes avoids in his telling is the build up that is common in other tellings, where we are slowly shown the other rooms—each usually filled with things of greater and greater beauty. Zipes gives this part of the story a sentence. The dread doesn’t need to be built here; instead, Zipes focuses on what happens after the horror is revealed. In a three page story, almost two of the pages are spent on action after the room has been unlocked, as the maiden tries to hide the now blood stained room key, begs for her life, and is prepared for death before her brothers burst in and saves her.

In Perrault’s version of the tale, a good portion is spent on the pre-marriage. In it, Bluebeard asks for the hand of either of two sisters. Neither sister tells the other that she is frightened of the man and instead insists that the other sister should be the one to marry, to gain this “good match.” This, read now, seems like a particularly dark undercurrent—women avoiding speaking their own feelings about a bad feeling they get from a man out of respect or shame or fear. Here we get more build-up before the reveal: the story is divided almost exactly in half between the journey to the room and the fallout afterwards. The build-up includes descriptions of the wealth and wonder of Bluebeard’s home.

While both stories end happily, or as happily as a story that includes dozens of murdered women can end, they each have different takeaways. Perrault’s: one of the most horrific things is that there is such darkness hidden beneath the veneer of such richness. Zipes’ translation of the Brothers Grimm, on the other hand: it is not the past horror that is the most awful thing, it’s the recurring horror. In the growing terror of the young maiden, after she finds the room, the reader can’t help imagining that every previous wife went through the exact same thing.

When I was a child, I had an illustrated collection of fairy tales. It included “Bluebeard,” and the seven pages or so of the story included several full-page illustrations. The one that sticks in my mind was of the unnamed protagonist opening the secret door and seeing the bodies of all of Bluebeard’s previous wives. Women’s bodies slumped in a darkened room, pools of blood, hair in front of faces. I can still close my eyes and see this image. As a child, it was scary in a way few things were. As an adult, thinking back on it, it is even more so. Some fairy tales gain poignancy with age–Bluebeard gains horror. But I still don’t think it’s a story about not being curious, not respecting your husband’s orders. Instead, it’s a story that begs women to be curious: look behind the doors, know what you’re getting yourself into, be afraid.