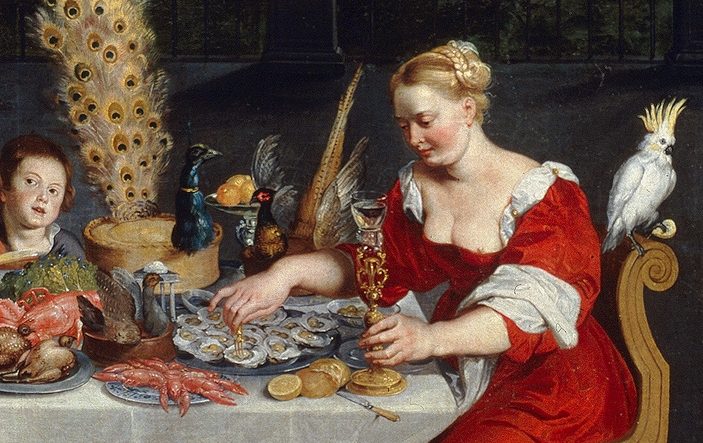 In a recent New York Times opinion piece, author Jessica Knoll opens her argument against the wellness industry with an anecdote about a lunch meeting with other successful women. Instead of simply ordering, the women narrated their decisions—not explaining their choices or sharing any allergies but recounting their restrictive diets, adding value judgements, and volunteering their insecurities with their bodies. Knolls describes this business lunch to introduce a norm and to point out why she finds it flawed. Instead of jumping into strategy or asking about initial ideas, this lunch starts with women discussing their diets and disparaging their bodies. She goes on to share advice that she received from a dietitian for re-framing her relationship in food in response to this norm: Treat your love of food as a gift.

The characters of Lara Williams’ new novel Supper Club do just that. Roberta, who works at a fashion website and spends her free time cooking, starts a women-only supper club with her roommate and coworker Stevie. These suppers consist of elaborate feasts, foraged for and cooked by the members, but mostly Roberta. The goal of the club is for its members to reclaim their love of food and purposefully inhabit a space, and the women do so by eating decadent meals completely and loudly, creating messes in the rooms in which they dine and on their bodies.

When Roberta was in college, she was lonely and started cooking and eating as a way to pass the time. She loves to cook, but her appreciation for her talent comes when she begins to cook for other people, especially Stevie. When she meets Stevie at work, the two become fast, intimate friends and move in together. The arrangement: Stevie would be in charge of “making the place look nice” and Roberta would cook. Roberta felt like this arrangement was not only logical, because Stevie couldn’t cook, but desirable: “Having somebody to cook for was like having something slot into place. I wanted to show off for her, cooking all my favorite dishes.” These dishes notably are hearty and filling: Stevie’s favorite is spaghetti with mascarpone and spinach.

After a few weeks of living together, Roberta and Stevie have a couple over for dinner, and Roberta relishes in how “nourishing” it is to cook for others. She decides to start a supper club to ensure she has more of these evenings. Though this idea is new for her, Roberta realizes that her connection between food and bonding isn’t new at all:

The thought of a supper club was somehow strange, a formalization of something personal and already strangely weighted. Eating and love had been, throughout my life, irrevocably connected. Fantasies of cooking for a partner. Promises of takeaways ensconced on the couch. My mum fussing in the kitchen while Joan of Arc whined at our feet. Sunday dinner with my aunt. I once heard a big girl in my philosophy class announce that she was starving. “I could eat the world!” she said, prompting exchanged glances from my peers. But I didn’t think she had a big appetite; I thought she had a big heart.

The bonding Roberta reflects is largely familial: a partner; her mother and her cat, Joan of Arc; her aunt. This passage, however, ends on an identification with a peer, a young woman, hungry and misunderstood by people surrounding her. Roberta’s motivation for creating the supper club is to forge meaningful relationships with her peers, using food as the medium for identification and the ritual around which to bond.

The themes Williams explores in this novel are timely, but they’re not new. In a recent essay, Williams points out that Margaret Atwood’s first novel, The Edible Woman, published in 1969, explores women and food, as well. According to Williams, portraying these topics together is always significant: “Food is sometimes dismissed as banal or extraneous detail in fiction, but in women’s writing it is not often a neutral terrain. This is something I wanted to explore when writing Supper Club: women’s joys, anxieties, complications, and complexities when it comes to food and eating.”

In The Edible Woman, which will soon be adapted for TV, these joys and complexities are divvied up between two categories of characters: single women, who eat, and married women or mothers, who don’t. The novel opens with a breakfast. Marian, the main character, meets her roommate Ainsley, who is hungover and sitting in the kitchen. Marian indulges Ainsley’s despair, feeding her tomato juice and comforting her, and urges Ainsley to eat for so long that she loses track of time and settles herself for a rushed breakfast: “I had to skip the egg and wash down a glass of milk and a bowl of cold cereal which I knew would leave me hungry long before lunchtime. I chewed through a piece of bread while Ainsley watched me in nauseated silence and grabbed up my purse, leaving Ainsley to close the apartment door behind me.” Here, Marian consumes actively. She has to “wash down”; she “chewed through.” There is a rush to her consumption, which she notes will still not be satisfying.

When Marian gets engaged, the novel switches to third-person narration. After that, Marian begins to lose her appetite incrementally. She first notices the problem when she finds herself unable to eat her dinner, despite being “so hungry she would have liked to devour the steak at one gulp.” This dinner is the first of many meals that Marian leaves hungry, as she finds herself unable to eat more and more foods—pork chops, chicken, carrots, and more.

In the end, Marian realizes she must break off her engagement, and she ceremoniously bakes a cake in the shape of herself to feed her fiancé, Peter. She shops for the ingredients and decorations and then methodically approaches the task. Peter doesn’t eat the final product and leaves quickly. But Marian eats the cake: “It seemed odd but most pleasant to be actually tasting and chewing and swallowing again. Not bad, she thought critically; needs a touch more lemon though.” Ainsley, who has since become pregnant, scolds Marian, who is unconcerned.

After this scene, the novel, for its final section, switches back to first-person narration, and Marian cleans her apartment, looks for a new job, and delights in, once again, eating steak for lunch. Her appetite returns, and she embraces it as a gift.

The main characters of both The Edible Woman and The Supper Club are attuned not only to their hunger but also to the taste of the food that they eat. Marian notes that her sponge cake needs more lemon, and Roberta repeatedly tests and recreates recipes to perfect the flavor. This calls to mind Stephanie Danler’s novel Sweetbitter, in which Tess, the novel’s young narrator, gets a life-changing job at a restaurant and learns from Simone, a senior server, how to taste and, more importantly, how to listen to her palette. Simone’s first lesson is a retraining: “‘Tasting is a farce,’ she said with her eyes closed, nose deep in the bowl of the glass. ‘The only way to get to know a wine is to take a few hours with it. Let it change and then let it change you. That’s the only way to learn anything—you have to live with it.’” This reframing appears subtly throughout both The Edible Woman and Supper Club as well. The taste of food and the experience of eating becomes more important as the central characters change—as their relationship to food changes them.

I was recently at a women’s leadership conference where a coworker of mine commented on the lack of substantial food available at the catering table. We had tons of options—puffed lily seeds, frozen yogurt bars, salads, chicken and lemon pasta, more salads—but they were all light, not filling or decadent. In all of these novels, the highlighted food is heart-warming and filling, with a depth of flavor that is experiential, that facilitates bonding or, as in The Edible Woman, agency. Fresh oysters, deep red wines, lemon sponge cakes, rare steaks, sourdough breads, stews, curries—even simply dangerous dishes, like steak tartare.

In Supper Club, the freedom to eat all of these foods without judgement is part of the ethos of the group. Of course, this freedom is limited to the confines of the meetups, which grow more destructive and absurd as the novel progresses, highlighting their distance from the everyday lives of these characters. As Roberta narrates:

The parity in our bodies allowed us to bond. But there was a sadness that perhaps, under different circumstances, we might not have. And the liberty of this sameness was felt only within Supper Club. Beyond our group, we still had to deal with the same old stuff. Unwanted and unsolicited advice came regularly. You shouldn’t be wearing that. Could you try eating this? Perhaps if you cut out carbs.

But Roberta isn’t interested in restriction and, in Supper Club, neither is Williams. Williams’ exploration of women’s complicated, layered feelings about food and eating—and the potential for bonding and connection when value judgements and body disparaging are rejected—is central to the construction of her novel.

In Knoll’s opinion piece, she ends with a call to action: women getting together without mentioning diets or bodies “would be a small act of resistance and a kindness to ourselves.” So, she says, “Who’s eating with me?”