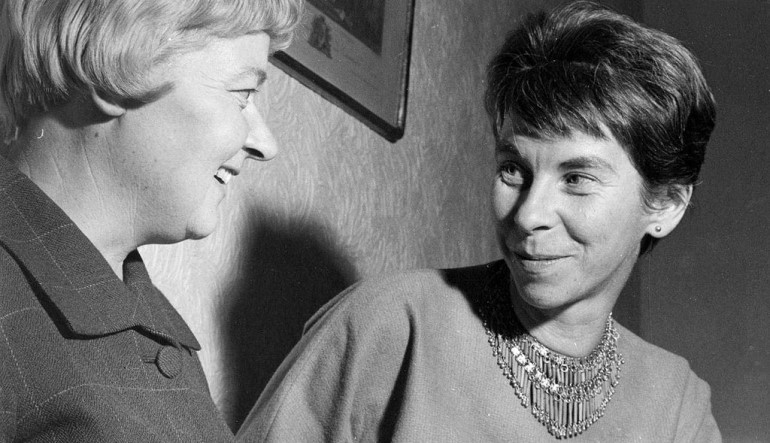 Literary fiction is focused almost exclusively on individuals. Usually, the protagonist is aware of his individuality, sometimes painfully, sometimes proudly. Portraits of artists doing their work are maybe the most intense in this regard. Many authors who portray artists, whether James Joyce, Thomas Mann, Virginia Woolf, or Haruki Murakami, notoriously invoke the trope of the sensitive loner. The Finnish writer Tove Jansson is a radiant exception.

Famous for her Moomintroll books and comics for children, Jansson, who died in 2001, was also a painter and a writer of adult fiction. Ali Smith, in her introduction to the New York Review of Books translation of The True Deceiver, Jansson’s 1982 novel, posited that “it could be said that everything [Jansson] wrote is, in one way or another, about the creative interactions between art and reality or art and nature.” Write about the artistic life she certainly did, but Jansson firmly eschewed the stereotype of the lone artistic hero: NYRB has published translations from the original Swedish for three of Jansson’s novels and one collection of stories; all three works have two co-protagonists rather than just one. Fair Play, Jansson’s 1989 novel released by NYRB in 2011, serves as a particularly poignant antithesis of the “loner artist” narrative: it deals with a loving partnership that, rather than getting in the way of artistic work, lifts and expands it.

Jansson herself had a lifelong partner, Tuulikki Pietilä, alongside whom she spent many years working. Fair Play follows two characters who are a close match for the real-life pair—Mari, a writer and illustrator, and Jonna, a visual artist—as they live and make things, each artist on her own path. Their story is written in mundane vignettes: they avoid their friends to watch a Fassbinder movie on TV, and then, almost incidentally, end up discussing the role of artificiality in art; they travel together for days shooting film of empty carousels and sharks and in the end, all that happens is that they watch the clips together, asking themselves whether they are good. In each of the episodes, artistic work can be seen taking its place alongside daily partnership, rather than trampling it underfoot.

All of the vignettes of Fair Play are written in the third person, but the narrative distance zooms in and out on Mari and Jonna, so that even if we are close to one point of view for an extended time throughout a particular story, it is almost impossible to argue that that viewpoint was the one in primary focus. Within these vignettes, dialogues is used frequently, and in their conversations, Jonna and Mari hardly ever agree. Though someone may get the last word, the story never allows either to be completely “right.”

Jansson is remarkable in her ability to capture a relationship that is positive and stable without being boring. The honesty of Jansson’s writing, her humor, and her unabashed love of daily ritual is as good a recipe for revelation as any marriage-in-shambles plot. Jonna and Mari know each other minutely, and yet frequently take each other by surprise. The two buoy each other up, even in the face of personal despair. In one episode, Mari has come over to share an attempted revision of a short story with Jonna. Jonna becomes tired of reading Mari’s unfinished short stories (a state with which anyone who has ever befriended a writer will instantly sympathize) and retreats momentarily into her bathroom. While there, she looks in the mirror and thinks “that it couldn’t go on like this, these short stories that were never finished and just went on and on getting rewritten and discarded and picked up again.” She comes back out, having resolved to tell Mari so, but in the end, when Mari says she is going to just go home, Jonna tells her to stay, to drink her coffee, to stay alert, and to start again at the beginning.

In the first vignette, “Changing Pictures,” Jonna suddenly decides to rearrange the pictures in Mari’s studio. It is an episode which prepares us for the philosophy of the whole book as it calmly proclaims the small miracle of trusting someone else with your personal space (and art). We are treated to the first of Jonna’s endearing rants:

But your grandfather and grandmother are too far apart, and for that matter it can rain in on your grandfather through the stovepipe. And your mother’s little wash drawing gets lost; it needs to be higher. That pretty mirror is idiotic, it doesn’t belong, we have to keep it austere. The sword’s okay, if a little pathetic.

As Mari watches, a little helplessly, she sees her own beloved objects transformed: “The wall regained a balance that was no longer traditional but instead almost provocative.” As Jonna is tossing Mari’s personal knickknacks in the process, Mari thinks “about whether she should be offended or relieved,” but Jonna acknowledges the difficulty without Mari having to articulate it: “Rejection’s not easy. But you reject words, whole pages, long impossible stories, and it feels good once it’s done. It’s no different rejecting pictures, a picture’s right to hang on a wall. And most of these have hung here too long; you don’t even see them anymore. The best stuff you have, you don’t see anymore.” And so we begin our tour of a relationship rather than an individual, one that that shifts only slightly as the seasons pass, one in which each partner shows the other the best things that have gone invisible through familiarity.

As Jonna is hanging the pictures, she reminds Mari that “Distance is essential.” Jansson wants us to hear that distance is essential in picture-hanging and in everything else, even in a relationship as secure as Mari’s and Jonna’s. There is distance in many of these episodes. There is the distance between the two artists’ studios, the attic described lovingly as a “necessary, neutral interval” which Mari likes to wander across. There are distances in time, natural stretches when one or the other is unable to work, “empty spaces which must be respected.” And then there is, at the end of the book, the promise of a great physical distance. This comes in the form of a year-long residency offered to Jonna during the last vignette and one she decides to accept only on the very last page. The book ends there, with the decision to accept, long before Jonna leaves.

Many authors might decide to pick up at the looming residency instead, to use such an event as the spark for their novel, rather than its conclusion. Many would lean into this separation, milk it for its uncertainty and isolation and end, finally, in an affirmation or lament of their single protagonist’s solitary path through the world. Fair Play ends with nothing but excitement for the year of work that is to come. Mari looks at the year that Jonna will be away not with jealousy or anxiety, but she begins to “anticipate a solitude of her own, peaceful and full of possibility. She felt something close to exhilaration, of a kind that people can permit themselves when they are blessed with love.” This, then, is Jansson’s sketch of the path of “work and love”—her personal motto. It’s the path that she seems to be exhorting us to find for ourselves, and it’s not one that can be walked alone.