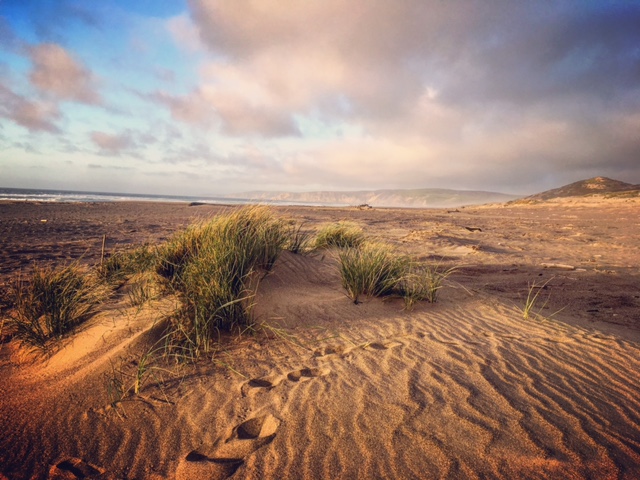 Claire Vaye Watkins, author of the celebrated collection Battleborn and widely acclaimed novel Gold Fame Citrus (not to mention the vital recent essay, “On Pandering”) has been compared to writers including Annie Proulx, Richard Ford, Larry McMurtry, Joan Didion, Cormac McCarthy, Mary Gaitskill, and Aimee Bender (to name a few!), and her writing about drought-damaged California and the West is often described as visionary and prophetic—descriptions she rearticulates below.

Born in Bishop, California, and raised “in a tiny natural history museum and rock shop on the edge of Death Valley,” she now teaches at the University of Michigan. She and her husband Derek Palacio (whose own debut novel The Mortifications was New York Times Notable this year, who wrote this vital recent essay, “Postcards to a Younger, Much Better Novelist”) also run the Mojave School for young writers in Pahrump, Nevada. Below, Watkins and I talk about writing and living in the West, conservation and resistance and optimism in the world of Trump, “moral yoga,” and faith in the California experiment.

Joseph B. Horton: You’ve said elsewhere: “When I first started working on [Gold Fame Citrus], in the early stages, whenever I would work up the courage to tell someone that I was working on a book about the water crisis in the southwest, most people had no idea what I was talking about. There was no recognition on people’s faces. And now, it’s the other end of the spectrum: if you’re going to write about the West and California, you have to write about the water crisis.”

I live in California now, and every time we get rain, there’s a bit of the creeping feeling—on the news, at the state house, with people watering their lawns again—that the drought is over. Do you think people can hold this idea of long-term drought in their heads? How do you implant or encourage a big idea into the “collective unconscious?” How can or does fiction help with this?

Claire Vaye Watkins: I’m so suspicious of speaking from a position of authority on these issues—how to do X—especially regarding my work because I basically write by Braille, feeling my way as I go along, no real clarity or vision at any point in the process whatsoever. But I did agree to this interview, so here goes: If fiction matters it is because of the way it combines narrative and language: thoughtful, surprising, illuminating language. It is through this perfection of language that the art makes change. I think this is very, very rare. I’m talking Orwell, Atwood, Baldwin. My work is not in that category, and I’m not sure that I’m necessarily trying to be. Art is vital, sure, expression is vital, but not every piece, story, or novel is actively doing the work of social change, and many that are do not execute on the level of the sentence to be effective. So it goes. I bring this up only because I’m seeing a lot of rah-rah “all art is resistance” rhetoric today, a kind of moral yoga wherein writers twist and contort the idea of artmaking so that they can keep doing exactly what they were doing before Trump was elected in exactly the same way—writing their shitty little story or poem or whatever and calling it resistance.

JBH: Along that line, you’ve also said that part of the evolving awareness of drought and water made you see the book as more realistic than you initially thought—that some of the imagined possibilities (dynamiting the sky, draining reservoirs) had already been tried. Is that a value of fiction, to be able to adjust the realism and speculation as you go? Thinking about the book now, as finished/completed, is it destined to be read as more realistic as we go forward? Is there any, I suppose, hope, that it will be read as more speculative by future audiences?

CVW: The book is not prophecy—it’s more like having an awful premonition and then telling your beloved about it so they too can shoulder the burden. I’m a little psychic, so this is something I know about.

The novel is nightmare mitigation, more astrology than geology. It’s not supposed to scare anyone straight. It’s just a projector in my brain beaming onto a wall the fear and hope I have for the American West given its blood-soaked soils and the ravenous, arrogant appetite of white American patriarchy. Of course I’m all for people reading the book and then ripping up their lawns.

JBH: Let’s, unfortunately, talk Trump. On the campaign trail, he infamously said that California was not suffering from a drought. At the time, he said, “If I win, believe me, we’re going to start opening up the water so that you can have your farmers survive.” Isn’t this the central fallacy of water in the West, that there is always more, that it’s merely a matter of logistics or access? That the water just needs to be “opened up”?

CVW: I think what makes some believe a line like that is more mystical than logistics or access—it’s agri-infrastructure as spirituality. Think about “rain follows the plow,” the slogan that convinced so many white people to go West in the first place. Think about the Mormon Exodus. Think about the worship of pioneers and godlike dambuilders throughout the West. The central fallacy of water in the West is the living legacy of Manifest Destiny: that we are divinely endowed with the right to any and all natural resources, that reckless consumption and absurd, corrupt public policy represent our mastery over nature, its so-called “development.” These are efforts at immortality. Trump is telling these “farmers” (actually he’s speaking to white rural people who identify with the bygone icon of the farmer, and to corporations that want to rape, pillage, and plunder the natural world) that he’s found the fountain of youth.

JBH: The novel envisions, obviously, a collapsing California and West, with fleeing “Mojavs” despised by much of the rest of the country. There are certainly present connections to anti-immigration rhetoric from Trump and others, and analyses of the election have talked about the electoral college as a protection against an “imperial California”—the state able to determine the course of the whole country. Other articles have suggested that other countries may begin to work directly with Sacramento instead of Washington to address climate change. What’s your take on this: what would an imperial California look like? (Are we already seeing it?) If California and the West are an experiment—can this many people live here, and for how long—do you see California as the canary in the coal mine or, in any way, as a model for what comes next?

CVW: California is ground zero of the resistance. If there is hope to be found, it is there. People who know far more about the drought than I do say the drought represents a failing not of technology but of political bravery. Scientists and activists know what needs to be done—which cotton subsidies should expire, which alfalfa exports should be curtailed—and if anyone can do it, it’s California.

My hope is the California experiment becomes an experiment in radically loving our planet. I think it can happen, yes. Most days I have all the hope of a Forty-Niner leaving St. Louis.

JBH: I talked with Brit Bennett about this pier in California that keeps getting destroyed and stubbornly rebuilt. I know you’ve thought about this too, the West being a foolish battle of wills, arriving white men forcing unsustainable change on the place. (“The whole white people thing and the American West is completely founded on the idea that man can be God,” the prescience of Cadillac Desert in all this.) There’s a keen sense in the novel and in Battleborn of the opposite: of people needing to adjust and adapt to the land. Is that a narrative/authorial decision—I want to write about this, this is a message I want to impart—or is it just the reality of growing up in the West and being able to see this adaptation as a necessary part of life?

CVW: I grew up in a tiny natural history museum and rock shop on the edge of Death Valley—the idea that human beings belong to the natural world rather than vice versa kept me alive. Later, reading enriched, deepened, and ossified the intuition that I carried with me around the desert as a kid, imparted to me by my parents, themselves self-taught naturalists and survivors.

JBH: We’ve talked to authors in this series before about writing the West when they aren’t living there. Do you find the distance helpful or challenging? You’ve said you really feel like you finished the book in Lone Pine, after visiting the Manzanar internment camp, and you’ve said about your work with the Mojave School, “I really do it for very selfish reasons…I want to get back. That’s the place that speaks to me and where my stories come from. I don’t have any family there now, no patrilineal or matrilineal tugs. I’m like a free agent. So I like having some roots. Or, I’ve found I need to make my own.” Is the West a recharge for you and your writing? (Could you keep writing about it without returns?)

CVW: Believe it or not, I find this to be a very personal question. Almost too personal to answer. When I was younger I appreciated the perspective that came with distance. It gave me access to material that became mine, helped me hear my voice. And it was enough to make annual pilgrimages to replenish the well. But I’ve been away for 10 years now and I can see that my leaving was not just a pragmatic response to a nomadic economy. I was running. Leaving was in part a survival strategy, one that may have run its course. I think I’ve proven whatever it was I needed to prove.

JBH: Finally, the novel—pre-apocalyptic, dystopian, whatever—has wonderful humor and warmth and inspiration too. As someone who has spent a lot of time imagining a darker future and finding within it these points of light, help us: what light do you see in the political years ahead?

CVW: Today I consider myself an activist for the first time in my life. I feel more purpose and urgency in my work on and off the page. I feel more focused on and vastly more disgusted with discrimination, capitalism, and greed than ever before. I am educating myself about my country’s brutal past and the effects of that past on our present. I am listening more and I am standing up more often, for myself and for others. I am actively trying to do good, a phrase that probably would have made me roll my eyes two months ago. I’m not alone.