We also ask contributors to the series to tell us about their favorite pets from literature. Here’s what Alan told us: “I’m a tough guy from a tough place and I write tough stories. But a little pig breaks me down. In Charlotte’s Web, Wilbur has found out he’s destined for the farmer’s chopping block and his new spider friend Charlotte says she’ll think of way to save him—and Wilbur, unable to sleep, says, ‘Charlotte, I don’t want to die.’ It’s just too real, too painful—I cry every time I read it. Wilbur is filled with so much innocence and beauty and humility and I don’t want him to die. I want to hold him in my arms and tell him the truth that he’s a very special pig and everything will be okay.”

We hope you enjoy Alan’s essay. 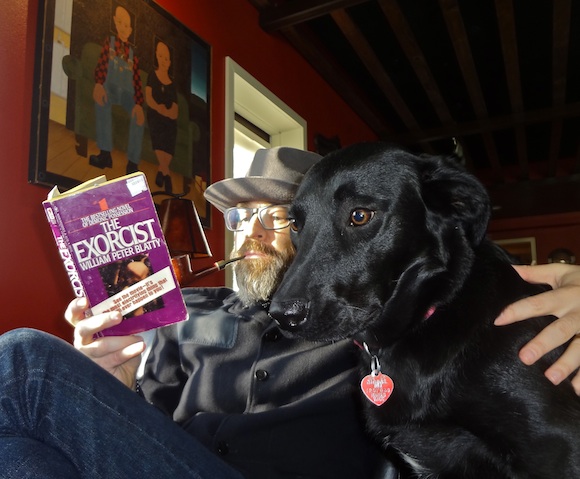 My dog Mazzy Maebelle Heathcock is a nine-month old black lab mix—a mix of what, we’re not sure, though part black-lab part bunny is my guess. She’s a pound puppy, and we feel very fortune to have her in our family. Mazzy is pure love. She is warm and cuddly and my wife and three kids love her as much as I do.

If you need to hug something, Mazzy is there for you. If you need a warm wet tongue on your face, Mazzy will always accommodate. If you need someone to attack an intruder or intimidate your neighbors, Mazzy is not the dog for you. She loves everyone. She even loves our eighteen year old cat, Kitty Sue, who, at her age doesn’t love much of anything anymore. But ol’ Mazzy does her best to snuggle up with Kitty and make friends. Mazzy is a good dog, and though she chewed up a pair of my Cole Haan shoes she’s been a pretty great pup.

The hardest part of training Mazzy was also one of the most endearing things about her. You see, Mazzy’s a water dog. Get her near a pond or stream and she’ll want to plunge on in. The same is true for bath tubs. One day I was filling the bath tub for my six year old daughter, Harper, and I heard a splash and went into the bathroom to find Mazzy in the tub. The two of them had a grand time together. I quickly understood that letting your child and dog bathe together was probably wrong, but sometimes wrong is so right that you just live ill for the better.

Because I work at home, and my wife and three kids are gone all day, Mazzy has become my writing companion. I find myself saying things like, “Hey, Mazzy, how do you think this sounds?” Then I’ll read her a paragraph I wrote, or maybe some dialog, and she generally wags her tail (even when she shouldn’t—bless her heart). I often wonder how much of what I read to her she understands. It seems she understands quite a bit more than one would think. In fact, Harper is currently working with Mazzy on learning her ABCs. “I know Mazzy can’t talk,” Harper told me. “But she can read silently.  Must be boring sitting around all day while you work, daddy. Once she knows how to read you can open a book for her and she can read a little.”

Make sense to me. Mazzy loves stories—she really does. Maybe it’s the dog taking the mold of its owner, but she loves it when someone reads to her. That said, I’ve found that Mazzy does not like scary novels. This is totally fascinating to me. I read to her all the time. She seems to really enjoy Pride and Prejudice, loves old Louis L’amour westerns, digs Flannery O’Connor, even Joyce. But if I start reading a scary novel, Mazzy gets really nervous. She usually jumps off the chair and goes to her crate. The photo above is scientific proof of the phenomena (ha).

Poor Mazzy. Poor sweet genius dog. But don’t worry—after taking this photo I gave Mazzy a new rawhide and read her some Walt Whitman and all was well with both dog and man alike.

Alan Heathcock’s book, VOLT, was a “Best Book 2011″ selection from numerous newspapers and magazines, including GQ,Publishers Weekly, Salon, the Chicago Tribune, and Cleveland Plain Dealer, was named as a New York Times Editors’ Choice, selected as a Barnes and Noble Best Book of the Month, as well as a finalist for the Barnes and Noble Discover Prize.  Heathcock has won a Whiting Award, the GLCA New Writers Award, a National Magazine Award, has been awarded fellowships from the National Endowment for the Arts, the Sewanee Writers’ Conference, the Bread Loaf Writers’ Conference, and is currently a Literature Fellow for the state of Idaho.  A Native of Chicago, he teaches fiction writing at Boise State University.