The ‘Writers and Their Pets’ series began with my own desire to celebrate my dog Sally, and since then I have also invited other writers to share with the rest of us the details of their lives with beloved pets. Today, please enjoy this essay by our blog editor, Andrew Ladd. 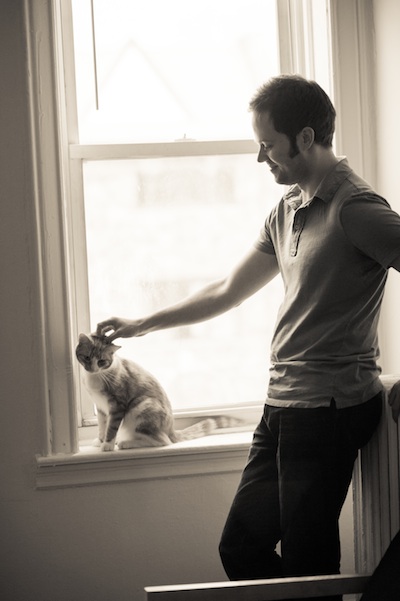 Many of the essays we’ve featured in the Writers and Their Pets series have been touching accounts of lost or deceased pets—but when I sat down to write my own contribution, about my wonderful two-and-a-half-year-old cat, Jack, I wanted to strike a happier note. The problem was, happy is hard to do, the narrative arc less obvious—and while that was a nice problem to have it was a problem nevertheless: I just couldn’t find a good story to tell about him.

I got Jack with my wife Mallory—then just my fiancée—the night before Thanksgiving in 2011. He was about six months old and recently rescued from a hoarder, and at the shelter he was sharing a cage with so many other cats he’d resorted to sleeping in the litter box. He smelled like it, too, when the staff fished him out for us to take a look at, but he nuzzled so quickly into my shoulder—and showed such terrified resistance when we tried to put him back—that our hearts crumpled. (Besides, we figured: we could always give him a bath.)

He was a white-and-orange tabby and so his papers, predictably, said Garfield—but we quickly rechristened him Jack Meower, after the main character on the TV show 24. Like his namesake, too, he turned out to have boundless energy, improbable agility, and superlative cunning, and he often drove us to despair getting inside and behind and on top of things we were sure we’d fully catproofed.

He was also a first-rate pet, though, companionable and affectionate. While I was writing he would come and sit on my lap (or, occasionally, on my notes), purring away until Mallory sat down to work across the room; then, he would start trading off every ten minutes, my lap to hers and back again, until we both settled on the couch at the end of the night and he happily joined us there. It wasn’t long before Mallory and I started referring to those evenings as ‘Family Time,’ which was mildly tongue-in-cheek, at least to begin with—but given that we had just gotten engaged, had just moved to a new city together, had just signed the lease on our first apartment as a couple, it also felt appropriate; an honest affirmation of a truth we were just starting to comprehend. We were a family now.

More and more we made Jack part of that family, too. At our wedding, a tiny, carved Jack sat at our feet on the cake topper; when I came to write a bio for my book jacket, I ended with: “[Andrew] lives in Brooklyn, with his wife and cat.” (The picture accompanying this post was also taken as a potential author photo.) So when I sat down last August and wrote a first draft of this essay, I capitalized on that sense of family. The draft opened with my childhood cat, who we had to give up under less than ideal circumstances, and ended with Jack as the uplifting coda I’d been hoping for, his rescue from a shelter as a sort of poetic retribution; I broke up one cat’s family when I was seventeen, and now I was starting a new family for another.

It was a nice arc, I thought, organic and on the bearable side of saccharine. But then, just two days later, an ugly new one descended: Jack was diagnosed with Feline Infectious Peritonitis (FIP), an incurable viral illness, in which the intestines slowly leak until the cat, its belly bloated from the wretched, brackish fluid inside, essentially starves to death.

On the day the diagnosis was made I’d been visiting Edinburgh for a month, and when Mallory, still in Brooklyn, called to give me the news, I changed my flight and rushed home early. After diagnosis, cats with FIP die quickly, usually within six weeks, and Jack—though lacking the telltale distended abdomen—had already lost two pounds; the vet thought he might only have a few days left. I believed that, too, when I saw him. He was a sack of bones, listless, hardly eating. He no longer had the energy to jump up on my lap while I wrote—though when I lifted him up there he still purred weakly.

For a while after that he rallied: started eating again; gained back some weight. One day I came home from work, harboring the now usual fear that I’d find him dead, and instead he was chasing a piece of paper around the floor. (I almost cried with joy.) Soon he was getting up on my desk again, and curling up with us in bed, and climbing into our laps for more Family Time—as if he knew, too, what a narrow miss we’d had.

After another few weeks, though, even as we tried to tell ourselves we were being paranoid, we began to see the first signs of swelling in his abdomen. His strength waned again; his appetite contracted. By the end his legs were so weak and his stomach so full that he wobbled when he tried to walk.

So one beautiful fall Sunday towards the end of October, we took him back to the vet. Sat and watched while they installed a catheter in his leg. Held his frightened head as the syringe emptied of its bright pink poison. Gasped a little, both of us, at how instantly he went limp. And then we walked home, eyes red, hugging each other, people staring at us on the street. It wasn’t, obviously, an arc anyone would have wanted—but at least, by the end, our family was strong enough to cope.

Andrew Ladd is the blog editor for Ploughshares, and his work also has appeared in Apalachee Review, CICADA, Memoir Journal, Paper Darts, and The Rumpus, among others. His first novel, What Ends, was the winner of the 2012 AWP Prize in the Novel; it is currently available in the US and Canada from New Issues Press, and a UK edition will be released by Oneworld Publications in August 2014. He grew up in Edinburgh, Scotland, and has since lived in Boston, Montreal, and London; currently he lives in Brooklyn with his wife. You can follow him on Twitter @agoodladd.