We also ask contributors to the series to tell us about their favorite pets from literature. Here’s what Bonnie told us: “My favorite pet in literature is, of course, the long suffering Modestine in Robert Louis Stevenson’s Travels with a Donkey in the Cevennes.  She is such a sturdy, cranky jenny, and Stevenson himself is half in love with her by the end.”

We hope you enjoy Bonnie’s essay. 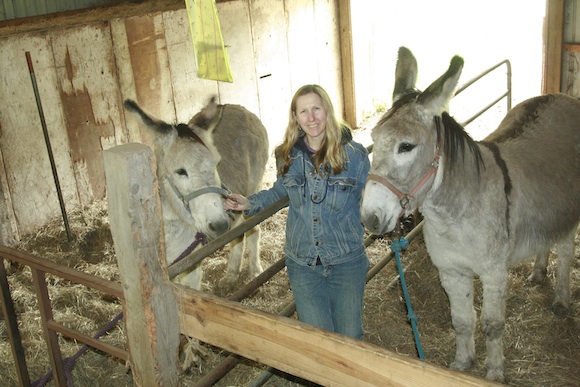 Jack and Don Quixote are my two donkeys, and I love the way they smell, and I love their beautiful eyes and noses and ears. When they he-honk, they go on for about twenty seconds and their joy fills the neighborhood.

Jack is the smaller donkey, at about 650 pounds, and Don Quixote, “Xote,” is his son, at about 850 pounds—and they both have the most common coloration of gray-dun body with black stripe down the neck and across the withers. They are called standard donkeys, at twelve and thirteen hands, as opposed to the miniature or mammoth varieties.

In my family we’ve always had donkeys because my mother was a horse trader and donkeys often got thrown into the mix; when we gave up on horses, we stuck with donkeys. We used to breed a female and male donkey every year, Jenny and T.R, and got a foal every other year or so that we’d sell to pay for hay. When T.R. died, we got young Jack, but since Jenny was forty years old (or more) by then, we decided she was too old to breed—so we got Jack castrated, at one year old. That wasn’t soon enough; Jenny went through her final twelve-month pregnancy to give birth to Don Quixote, who grew big and healthy.

Jenny died just after Don Quixote was weaned, at about a year. Now we have the father and son, both castrated. (An unadjusted Jack, like a stallion, can be a dangerous animal.) I can ride Jack, but both donkeys mostly hang in their five acres of pasture. They roll in sand pits they’ve dug, and sometimes they rear up on their hind legs and play fight. Or they play hump each other. Their favorite thing to do is go for a walk with me outside the pasture to smell and eat new things.

My favorite activity is to sit in the barn and read while they eat. Their favorite food is everything, but I only allow them grass hay, oats, and a few carrots, apples, and equine treats. Oh, and peanut shells now and again. (Donkeys have a habit of eating themselves sick if you let them.) Donkeys can live to fifty if they’re well cared for, and often a companion donkey will die of loneliness. I always imagine that if one of these donkeys dies, I’ll find a pack saddle and take the other one on a trek across America, and we’ll taste and smell our way along together.

Bonnie Jo Campbell is the author of the bestselling novel Once Upon a River (July 2011, W.W. Norton) and a 2011 Guggenheim Fellow. She was a 2009 National Book Award finalist and National Book Critics Circle Award finalist for her collection of stories, American Salvage. Campbell is also author of the novel Q Road and the story collection Women & Other Animals.  She lives outside of Kalamazoo, Michigan with her husband and other animals. Her website is www.bonniejocampbell.com.