The ‘Writers and Their Pets’ series began with my own desire to celebrate my dog Sally, and since then I have also invited other writers to share with the rest of us the details of their lives with beloved pets. Today, please enjoy this essay by Carol Keeley. 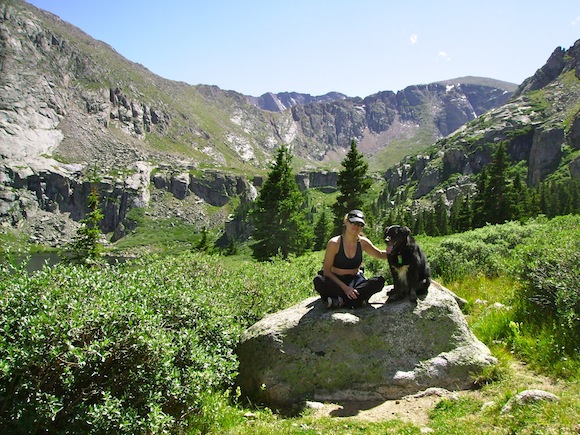 It was a kill shelter, the kennels concrete and crowded. We’d visited shelters weekly since losing our first dog. My husband fell in love each time. I was still in mourning. It had been eight years.

This shelter was wretched—sickly dogs smeared with feces, frenzied barking, puddles of piss. A handsome mutt smashed his heart against the bars as we passed, as if he recognized us. We stopped. He had big polka-dotted paws and a wide smile. “One year old, not house broken, loves everybody,” said his slip.

I was finishing a novel and a degree. Brad was often traveling. An untrained older dog? With liquid green diarrhea? I resisted for two months.

The night we brought him home is one of those love-stories-with-a-twist. It’s Jake’s favorite. He beams whenever we tell it. Later, we learned that he was next in line to be killed.

But that’s not today’s story. Eleven years later: Jake comes to us at midnight, anxious, then staggers and falls. Can’t get up. I’ve seen that far-away blend of bewildered and terrified in the eyes of the dying. We rush to the emergency vet clinic. We’re crying so hard, they tuck us in the back, quarantine our grief.

Now, after a week of inconclusive tests, Jake’s on his back in a cushioned V, gel on his shaved belly. Brad and I cradle his head, murmuring love. Our vet adjusts the ultrasound, narrates random things—a flotilla of undigested food in the duodenum, a liver less than pink. Then he finds the spleen, several tumors. Takes pictures. Jake starts to squirm violently.

“Are you getting upset?” I ask Brad.

He gulps a breath to steady himself. Those two are joined at heart. If Brad gets upset, Jake will break free to console him. He’s always taken care of us. Now he teaches Brad how to be calm and open in this dreadful moment.

Jake taught me to open the gate of my solitude, to relinquish my anger habits. My anger was the same as violence to him—because it is. I strive to unlearn it.

When people asked what he was, we’d say he was part Border Collie, part Tigger, part Tasmanian devil. His energy was bonky and joyous. But also soulful. Once, while zooming around a ski village off leash, he turned a corner and halted, dropped to the ground, become very still and small. A tiny girl clung to her father’s leg. She’d been mauled by a dog once. Was terrified of them, but fascinated by Jake’s gentle awareness. She inched forward and hugged him, the father tearfully amazed. We’ve had countless such moments.

Now when people ask what he is, I say he’s a bodhisattva.

I’ve seen Jake’s tenderness melt fear—in children, in battle-scarred dogs, even in coiled rattlesnakes. And in me, the one who resisted bringing him home because she’s terrified of love. Today I can’t fathom life without him.

Jake’s tumor—one large one, instead of several—turns out to be benign. A miraculous reprieve. We’re wildly grateful, but it feels tentative somehow, as though death has already entered the room. He’s twelve and has two pinched discs, arthritis, two rebuilt knees, no spleen. “You need to get a job,” I tell him each time we pay the vet. He beams. His job is to teach me how easy love can be. Even when your heart is on fire. Even when you’re here, in death’s sitting room, with the being you know you can’t live without. But must.

He is dying by shades to help us adjust. I can only hope Rilke’s claim that the ones we love die into our hearts will be true of Jake, too. I carry those I’ve loved and lost with me intimately. I long for Jake’s gentle kindness, his fearless trust in love to stay behind, to be also mine.