The ‘Writers and Their Pets’ series began with my own desire to celebrate my dog Sally, and over the coming months I will also invite other writers to share with the rest of us the details of their lives with beloved pets. Today, please enjoy this essay by Martha Serpas. 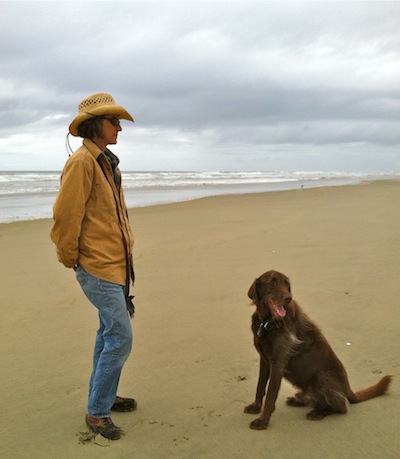 I felt fairly monogamous about the first dog I raised as an adult. He saw me through two break-ups, two graduate degrees, and helped launch a marriage. When he died, Audrey lit votive candles and tucked frozen vegetables around his body until I could fly home for a wake of sorts. I hefted him into the four-foot grave we had dug while we called every (bewildered) person who’d ever expressed affection for him. I’d been at his birth—and afterward was rarely without him—but I missed his death. Unabsolvable.

Then my cousin said to me, “You can’t wallow in your grief when there are so many dogs who need a home.” So five months later we got on Petfinder and saw this brown fuzzy face with a bleached, wispy beard and bleached eyebrows. We drove three hours. He was as big as a horse. (The Petfinder photo had no scale reference.) I thought, this is not my dog. That was the point: He was a dog. Mine was dead. This one would have to become my dog. He threw up all the way home, didn’t bark for a month from nervousness, and still will follow me around if there’s a chance I might leave him. “I haven’t left you in seven years,” I say. “You think I’m gonna get an itch now?”

He came with the name Kendall, which was too prep school for his playground goofiness. (He’s a Labradoodle who doesn’t fetch or swim.) So we changed the spelling to Kindle, a verb… and then, nice going Amazon. Yeah, two writers with a dog named Kindle.

After his first check-up, my vet said, “This one’s different.” (Duh, I thought.) “You needed the first one. This one needs you.” When, during thunderstorms, he drools like the anesthetized and crashes around like the electrified, we know it’s true. When he keeps a big paddle forepaw on my foot when he naps—just to make sure—I feel my obligation. He’ll stare at a spot of light for hours. And when he returns breathless from the woods or from chasing bird shadows at the beach, his tongue unspooled and those eyebrows twitching like ticker tape, I think I’m the one who needs his joy, his example of what can be daily overcome.

Martha Serpas has published two collections of poetry, Côte Blanche and The Dirty Side of the Storm. Her work has appeared in The New Yorker, The Nation, Image, and Southwest Review. She has taught at Yale Divinity School and the University of Tampa and is now on the faculty of the Creative Writing Program at the University of Houston. She co-produced Veins in the Gulf, a documentary about Louisiana’s disappearing wetlands, and serves as a hospital trauma chaplain. Other chronicles can be found on her website www.marthaserpas.com.