We also ask contributors to the series to tell us about their favorite pets from literature; Meghan’s, she tells us, is Nana the Landseer Newfoundland from J.M. Barrie’s Peter Pan.

We hope you enjoy her essay. 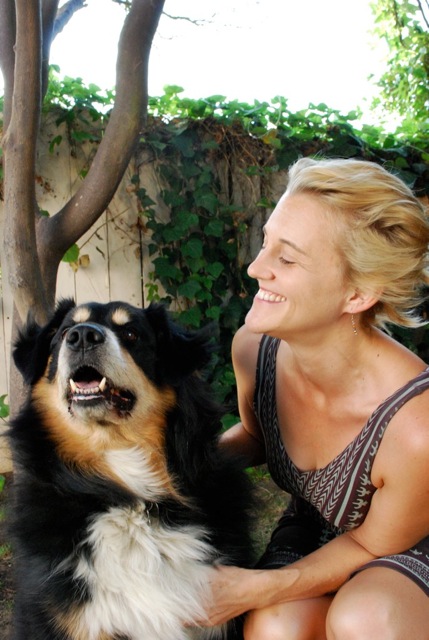 A week before my dog, Rex, died this past March, I submitted him to a blog called The Daily Puppy. As oppressive internet cuteness goes, this is up there. People send in photos of their puppies accompanied by descriptions that are often in the first person, as though the dogs have composed their own personal ads. The goal is to win a coveted “Puppy of the Day” slot on the home page, a designation that invites a trail of gushing comments on the order of “ooh, you precious baaaby!” and “you are so furrylicious I could hug you all day.”

The site also features a “grown-up puppy of the day.” One morning, upon looking at Rex and getting the distinct feeling he didn’t have that many mornings left, I gathered up a handful of his best photos and sent them off, along with his (somewhat grammatically challenged) personal ad. “My name is Rex and I am a grownup puppy . . . my humans say that there’s never been a dog loved as much as me.”

Rex was the grown-up puppy of the day the very next day.

Such blatant displays of sentimentality are almost unheard of for me. As a rule, I’m allergic to in-your-face adorableness, especially the kittens/babies/kids-saying-the-darndest-things kind that’s endemic to the internet. But I often make an exception for dogs and I always made an exception for Rex. My normally dry, undemonstrative personality flipped upside down in his presence. I talked baby talk to him. I hugged him constantly. I told him I loved him approximately 18 times a day. I used words like “furrylicious.”

Rex was my longest serious relationship. When he was eight-weeks-old I plucked him off a farm in rural Nebraska, where he was one of two remaining pups in a litter of ten. In the beginning, I wondered if he was a runt or somehow lacked the showmanship to get himself chosen earlier, but I now know (schmaltz alert) that he was just waiting for me. Rex was the star of my show, an 85-pound yak-like creature that a friend once perfectly described as “a mound of love.” He lived with me in no fewer than 12 houses and apartments and, when my husband came on to the scene (who I’m still convinced married me at least partly for my dog) Rex loved him as though he’d been there all along.

For much of our time together, Rex was less a pet than a partner, muse, and child rolled into one. He slept in my bed. He came along on vacations. His face was—and remains—the wallpaper of my digital self-presentation: my screensaver, my social media avatar, the photo glowing on my cell phone. Tacked to the bulletin board above my desk are five snapshots of Rex, one of my husband, and a couple of taxi receipts.

Rex died at nearly 13, a respectable age for a big dog. His Daily Puppy photos, some taken just a year earlier, show a sturdier, shinier dog than he was at the end, but there is nothing about his younger years that he didn’t carry into his last days. In his final moments, before the vet released him back to the big prairie skies from whence he came, he gobbled up a piece of bacon and smacked his lips as if to say “now that was good.” He was right about that. And he was right about no dog ever being loved more. He was pretty much right all of the time.

Meghan Daum has been an opinion columnist at the Los Angeles Times for more than seven years. She is the author of three books: the essay collection My Misspent Youth; the novel The Quality of Life Report; and the memoir Life Would Be Perfect If I Lived In That House. Her essays and articles have appeared in many publications, including The New Yorker, Harper’s, and Vogue. She is currently working on a book about American sentimentality.