The “Writers and Their Pets” series began with my own desire to celebrate my dog Sally, and since then I have also invited other writers to share with the rest of us the details of their lives with beloved pets. Today, please enjoy this essay by Melissa Scholes Young. 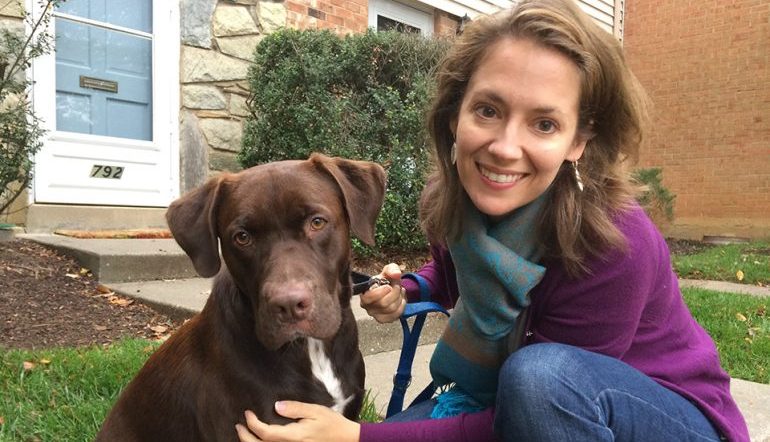 I blame Santa Claus. After Christmas, my youngest daughter begged us to tell her the truth. She clung to the stuffed black dog she’d been sleeping with for five years, her brown eyes ready to spill over, and said, “But. But. I was going to ask Santa to make Junie real.” I scheduled our appointment with Lucky Dog Rescue the next day.

Huck a.k.a Huckleberry Nacho Finn Scholes Young was not the dog we were supposed to bring home. We went to the shelter adoption to meet Julie, a smaller female lab mix. She had the perky ears of my childhood German Shepherds. She was small enough for the kids to walk. She was a few years old and wouldn’t have puppy behaviors. But Julie wasn’t interested in us. She barely sniffed my hand before lunging happily at the other dogs. Julie was a dog’s dog. Huck ignored Julie and trailed me. I patted his head and he leaned in. If you’ve had a dog lean, if you’ve felt an animal claim you, you know what happened next.

I made excuses at first. He was too big, too strong, too much dog. Much of Huck was uncertain. Maybe he was still a puppy. Maybe he’d been rescued from dog fighting. His face had fresh scars and his ribs protruded. He’d been brought from a rural shelter in South Carolina. Maybe he’d done something to earn his rescue name “Ruffs.” I looked into his soulful eyes and told him to sit and he did. I told him to stay and he let my kids love all over his silky ears.

Almost a year later, Huck has learned my agenda by the shoes I slip on. Sandals mean it’s time to do your business outside. Tennis shoes make Huck run in circles with excitement. Rain boots indicate a quick game of catch in the backyard. High heels tell him I’m leaving; he sulks to his bed. It’s my pale pink slippers, though, that signal Huck’s real work. He scoots his sixty-pound-chocolate-lab body between the legs of my desk, sighs, and settles his chin on my left foot. His amber eyes assess my movements, waiting for me to open my laptop, sip my tea, and begin. My fingers click rhythmically on the keyboard and Huck nods off. Sometimes he snores. Loudly. If I get deep into a chapter, he might chase a ball or two in his dreams, jogging a little in his slumber, and whimper with delight.

As I write, Huck’s head grows heavier. The bones of his chin cement my place. If I move or pause in my writing, I might wake him. And so I try not to. I linger in a scene relayering sensory details. I write a line of dialogue again and again until it doesn’t sound like dialogue. I finish my editor’s suggested revisions well and ahead of schedule.

After awhile, my tea is cold and Huck needs to go out. He sits up and nudges my knee. Fresh air and exercise wakes me for my work again. And like Huck, I learn to sit and stay, too.

Melissa Scholes Young’s work has appeared in Narrative, Huffington Post, Poets & Writers, Brain, Child and other literary journals. She serves as a Contributing Editor for Fiction Writers Review and teaches at American University in Washington, D.C. You can read more of her writing at www.melissascholesyoung.com