We also ask contributors to the series to tell us about their favorite pets from literature. Here’s what Nancy told us: “I’ve always been fond of Argos, the faithful dog in the Odyssey, who manages to survive in Ithaka the whole twenty years that Odysseus is trying to get home.  Argos’s appearance is brief and touching–he is the only one who recognizes Odysseus immediately but is too old and decrepit to get up and greet his master. He has just enough strength to drop his ears and wag his tail before he dies.”

We hope you enjoy Nancy’s essay. 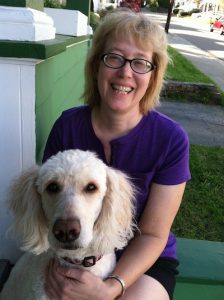 I never liked dogs much. But from early on, my daughter Sophie gravitated toward them. She’d spent the first ten months in her life in an orphanage in a country where pet dogs were unusual, and yet she constantly buddied up to friends’ pets that were twice her size. Once she could talk, she begged for a dog. I said no.

Sophie was ten when, in a remote village in China, we tracked down the man who had brought her to me from Yiwu to Hangzhou years ago. I’d had no idea who he was, only that she seemed attached to him. Now we learned that he’d been married to an orphanage employee and had bonded with Sophie and maybe taken her home to visit his family—though because of the language barrier, that part was unclear.

And, it turned out, he had a dog.Meeting that man and glimpsing his skinny black lab skittering off down a dusty road changed my entire vision of the first ten months of my daughter’s life. The man might have taken her home. Sophie might have played with that dog. Someone had loved her, and maybe she had experienced a world outside of her tiny orphanage crib.

So in a crazy sentimental moment, I vowed to get her a dog. “Promise me you won’t totally hate this dog,” Sophie ordered, and I said I’d try.

Mollie promptly lived up to her name and mauled every shoe and stuffed animal in sight. She’s a cunning predator of distraction, eating up chicken dinners when I’m not looking or wallowing in puddles and transforming from a white dog to a brown one, lying there after her worst bouts of mischief, face on her paws, looking pleased with herself as her tail slaps rhythmically against the couch.

Amazingly to me, my attachment to this dog was instant and complete.  I discovered fourteen years ago in China how fiercely I could love a baby, and then a second journey to China led me to yet another lesson in how the heart can expand.

Now, Mollie follows me everywhere—not, as Sophie complains, because she loves me better, but because I’m a messier eater and she can score more crumbs.  But the source of her devotion doesn’t really matter.

Every day, she tugs me by the leash through the turmoil of parenting a teenager who seesaws between sweetness and surliness.  As Sophie makes her necessary wild stabs at separation, Mollie pulls forward, sniffing, never looking back. The smells of dog pee, fast food wrappers, moldy apple cores: this is all the entertainment and joy she needs.

I watch and my worries, exasperation, and sorrows shrink, replaced by sunlight through trees, and Sophie’s shrieks of laughter when Mollie  emerges from a puddle and water droplets fly, and an 80-pound dog trying to crawl into my lap and seeming bewildered every time because she won’t fit.

Nancy McCabe is the author of three memoirs, most recently Crossing the Blue Willow Bridge: A Journey to My Daughter’s Birthplace in China. Her creative nonfiction has appeared in Fourth Genre, Newsweek, Prairie Schooner, Gulf Coast, and other magazines, received a Pushcart Prize, and been recognized six times on Best American notable lists.  Her reading memoir Medium-sized House on the Prairie is forthcoming from Missouri. She directs the writing program at the University of Pittsburgh at Bradford and teaches in the Spalding University brief-residency MFA in writing program.