The ‘Writers and Their Pets’ series began with my own desire to celebrate my dog Sally, and since then I have also invited other writers to share with the rest of us the details of their lives with beloved pets.

We also ask contributors to the series to tell us about their favorite pets from literature. Here’s what Nathaniel told us: “The summer I graduated college I took a road trip across the country in my parents’ minivan, to discover in person what I’d been writing about as a student of “American Culture.” Reportedly this was also the impulse behind John Steinbeck’s Travels with Charley, a touching account of driving cross-country with his 10-year-old poodle as he rediscovered America. I read it on my trip as I discovered America for the first time. Who wouldn’t want a sounding board like Charley, trusted tour guide and guarder against bears?”

We hope you enjoy Nathaniel’s essay. 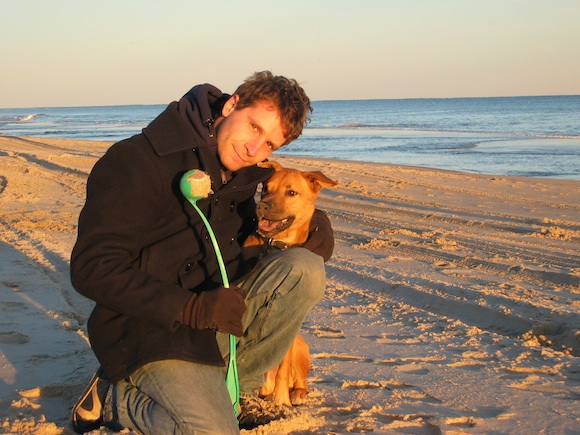 Romeo was a rescue dog from a city shelter in East New York. He was all Brooklyn from the get-go. So it wasn’t hard to figure out where to scatter his ashes when he finally left us.

Every morning for years, we had started the day trotting through Fort Greene Park, which Walt Whitman helped create and Richard Wright and Ralph Ellison used as a writing perch. That seemed the obvious choice. Still, I had to spend some real time deciding. After all, Romeo was one of the most widely traveled dogs I know, choosing only the poshest destinations: he romped the beaches of Martha’s Vineyard, East Hampton and Fire Island; hiked the rustic roads and grassy hills of Sullivan County, enjoying nothing more than a wild back roll on the 15-acre farm he inspired us to buy; he lived with me in London, taking a weekend home in Notting Hill; he even spent a month in Aix-en-Provence, visiting cobbled plazas, daytriping to vineyards and fording the moats of medieval castles.

So where was his favorite place? For someone who’s not always great at making decisions, this was an easy one: because I came back to beginnings, to roots.

Fort Greene Park is not only the place Romeo and I started each day for years, but the spot where I first conceived of him. You see, Romeo was a 9/11 dog. On that day, it was the top of that park where I came to see what was going on. And as we watched the skyline in horror and disbelief, a woman next to me, stroking her dog, said simply, “it’s nice to have her at a time like this.”

It was then I knew. Two months later, Romeo was born, and two months after that, I took some friends to the pound one Saturday “just to look.” The pound had only one tiny puppy, who said with a roll onto his back, “pat my belly,” and “take me home!” A week later I brought home my Romeo.

The top of the park is marked by the Prison Martyr’s Monument, a memorial to America’s Revolutionary War dead. So that tombstone, where I conceived of Romeo while gazing across at the wrecked Manhattan skyline, will now be Romeo’s tombstone. The spot where the thought of him began, and where we came together at the start of each day, will also be his end, his final resting place.

Though 9/11 inspired Romeo’s entrance into my life, I always knew I’d get a dog. I just had a number of fears about having my own. I worried I’d have to get up before 10. I worried my dog wouldn’t be the cutest one. And I worried about dog fights and other things I couldn’t control. I even worried I might have emotions I didn’t want to have, like fear and anger and maybe some kind of love I didn’t know how to feel.

Romeo dispatched each of these concerns in no time. He woke me up every day at 8 so that worry became a reality and no longer a worry. Obviously there was no dog cuter than Romeo. As for things I couldn’t control, including emotions, isn’t that the whole point of getting a pet, of inviting a little bit of wild, uncontrollable nature deep inside your life?

Romeo gave me joy beyond anything I ever conceived. Watching him run in wide circles was an unalloyed pleasure. As was staring at him curled in a golden ball in the center of one of his couches or on our bed, his head resting on a pillow like a small child. He taught me I could feel intense, visceral anger and still love someone that much, and know he wouldn’t go away; taught me I could feel so out of control about something but know it’s still worth it.

It’s hard not to feel that Romeo was taken a bit before his time, at only 11 and a half. Until just a week before he died, he was galloping happily in the park. But in so many ways, the natural way he left us was his last, great gift. Romeo was diagnosed with inoperable lymphoma in June. It was two days before the Gay Pride parade, which my boyfriend and I planned to attend to celebrate our recent engagement. After waiting for us to return home from dinner the night before the parade, Romeo made the decision, on his own, to leave this world. Not once have I had to regret playing God, because I didn’t have to. I didn’t have to regret not being by his side when he died, because he made sure he waited for me. One last time.

Dogs are needy, selfish creatures. But they’re also instinctively selfless—in the constancy of the love, loyalty and protection they give us. Romeo spared us the guilt that so many other dog owners experience when they choose to put their dog down. He spared us—and himself—the agony of a prolonged decline. He didn’t even want us to miss Pride.

So where was Romeo’s favorite place? The real answer is: with me. Wherever I was. This was a rooted and devoted dog. He adapted beautifully to traveling the world. But what he most cherished was being home. Romeo couldn’t stay with me forever. But second best is having him lay eternally on this cherished hillside, where he and I can daily greet each other as I top its crest with his adoring little sister, Sadie.

Nathaniel Frank is an author, commentator and historian who wrote Unfriendly Fire: How the Gay Ban Undermines the Military and Weakens America. He is a contributor to Slate magazine, has appeared on “The Daily Show,” and writes and speaks on gay issues, cultural history and social policy. His writings have appeared in the New York Times, New York Magazine, Washington Post, Huffington Post, The New Republic, USA Today, Los Angeles Times, the Philadelphia Inquirer and elsewhere.