The ‘Writers and Their Pets’ series began with my own desire to celebrate my dog Sally, and since then I have also invited other writers to share with the rest of us the details of their lives with beloved pets. Today, please enjoy this essay by Nina Mukerjee Furstenau. 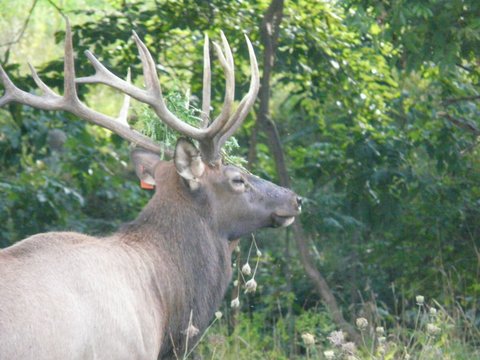 Zee was his name. He had liquid eyes and a proud stance. He also towered over me at well over six feet—without his antlers. My husband raised Roosevelt and Rocky Mountain elk on our Missouri cattle farm from 1997 until 2009. Zee had lost his mother and we raised him on goat milk until his size and strength was too much for the goat even after we put her up on a hay bale.

I don’t want you to think I don’t do normal pets. We have dogs, we’ve had cats, my daughter had a gerbil once. My very own Pepe was the tiny toy poodle farm dog our children grew up adoring. But Zee, a charmer from the beginning, was something else.

When the second graders came out every year to visit the farm and all the other elk stayed back, Zee walked straight up to the fence to get his nose scratched. He loved the attention and would lower his head to the right height for the pint-sized visitors. We started calling him ZeeBee for no reason other than it suited him.

When I left the farm for work or errands, Zee would be standing sentinel at the gates. He would toss his head and take your breath away: magnificent and mischievous. When I returned, he waited until I stopped the car, got out, and talked with him a minute.

He would get overly involved with twine at times and get it tangled in his antlers. We never could find the source of the twine, but if there was any on the farm it ended up snarled and dangling over his perplexed eyes.

But Zee grew into a bull elk that was a tad grumpy in the fall rutting season. Our daughter did not take this into account when she backed our small SUV up to the fence one day to show a visiting foreign exchange student Zee’s manners with visitors. It was September. The vehicle was close to the fence, in his territory.

He plunged his antlers through the fence wires and into the back passenger side window. Screams erupted, and the girls tried to pull away. Unfortunately, the car was still in reverse and they got closer to the fence. Zee attacked and shattered the back window, too, he dented the fender, and caved in the large back door. He snorted and strut away.

By November he was back to tossing his head and almost winking at us: favored, but no one’s toy. He was proud and somehow vulnerable, beautiful and calm, and then suddenly surly. He was so handsome that we never tired of just looking at him with his head tossed back to hold the weight of his antlers, chest out, feet covering ground so quickly.

He lived his elk lifespan, his cycle of non-rut and rut behavior uninterrupted. His beautiful form and genetics made him my husband’s choice for herd bull, and we all think the female elk would have chosen just as well.

He was never a companion animal, never bred to be so—but who wouldn’t have been drawn in?

Nina Mukerjee Furstenau has published two books, Biting Through the Skin: An Indian Kitchen in America’s Heartland and Savor Missouri: River Hill Country Food and Wine. She teaches food and wine writing at the University of Missouri. Her work has appeared in publications such as Painted Bride Quarterly, Missouri Life magazine and the Columbia Tribune newspaper. Other chronicles can be found on her website www.ninafurstenau.com.