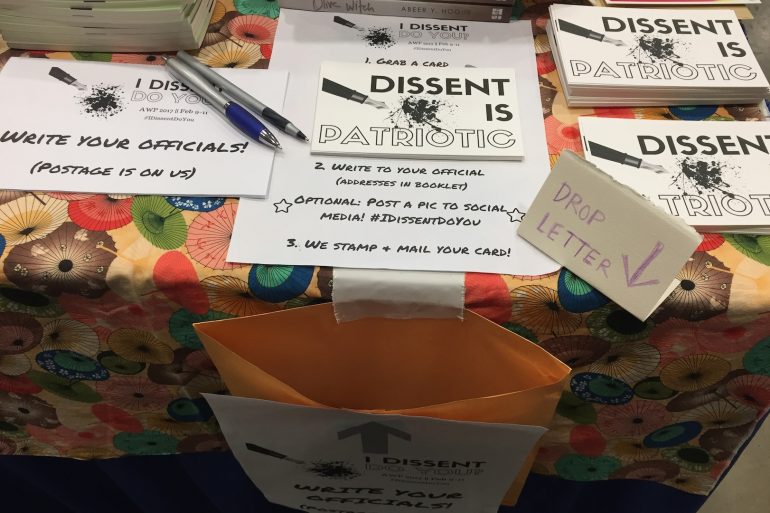 The literary community descended on Washington, DC last week for the Association of Writers & Writing Programs’ annual conference, and participants seized the opportunity to register their dissent with the current administration. Conference attendees offered resistance in the form of buttons and signs, marches and protests, rogue readings, and hallway conversations. For writers, as E.L. Doctorow said, “the national soul is always the big story.”

The official AWP schedule featured dozens of panels on politics and social justice, but the references to the current “regime” and “Trump as trigger” spilled out from the patterned carpet of hotel ballrooms onto the winter streets of Washington. Much of the activism was organized from the ground up, by writers struck by the happenstance of the industry’s largest conference landing them in the nation’s capital in the tumultuous early weeks of the administration.

“It felt like a waste to be here and not do something explicit,” said AWP attendee Michael Morse, before departing with fellow New Yorker Gina Apostle to share their views at the Capitol Hill office of Senator Chuck Schumer.

Novelist Robert Marshall, who helped organize a Friday afternoon rally at the US Capitol, said he was motivated by the “huge and terrifying attack on truth going on now. Whether people write science fiction or fiction or poetry or nonfiction, truth is such an essential element in writing. We are facing an administration that is attempting to move forward on the basis of lies and ‘alternative facts’ and butchering the language in order to do so. For people who have devoted themselves to what you can do with language, and in some way protecting the language, there is a mission there.”

The mission called to other conference attendees, as well. Poet D.A. Powell cited the power of social media in connecting those interested in protesting with those who could offer information and resources, such as Washington-based writers who brought art supplies to out-of-towners making protest signs in their hotel lobby.

“Faced with laws that go against the grain and fabric of American values, here we are as poets and writers, defending American values,” Powell said, noting the irony of those who usually push boundaries and try to broaden viewpoints advocating for those in power to “just get back to basics.”

It was the basic constitutional tenant “that Congress shall make no law … abridging the freedom of speech” that inspired a candlelight vigil outside the White House on the last night of the AWP conference.

Eric Sasson, a short fiction writer, helped to organize the event, saying “the vigil is a way for us to show solidarity and to raise our voices collectively against what we feel will be a steady attack on free speech.” The overwhelming response, Sasson said, “speaks to how urgent and necessary these kinds of actions are to so many people.”

After a grassroots beginning with Sasson and other writers, the vigil was amplified and supported by a local Washington organization, Split This Rock, a “national home for those of us who are activists and poets, both,” according to Executive Director Sarah Browning. Split This Rock hosts a biennial national festival, readings, workshops, open mics, campaigns for social justice, contests and awards, a DC-area youth program, and a social justice poetry database.

Browning explained the focus of the vigil by noting that “freedom of expression is the fundamental human right upon which all others are built–we can’t organize, make art, worship, dissent, gather freely, if we can’t speak freely. It makes sense for writers and artists to concentrate on this essential human right now.”

Inside the cavernous conference hall, writers gathered in suits, preparing to visit the Trump Hotel in downtown Washington and resist by reading poetry. George Mason University MFA candidate Dave Stroup said he was planning to read an excerpt from Elizabeth Alexander’s Praise Song for the Day, a poem written for and delivered at President Barack Obama’s inauguration.

Conference-goers also organized using #NoWallsAWP to form human chains, holding hands in the exhibit hall and later in the entryway of the convention center, chanting slogans such as “no ban, no wall, sanctuary for all” and “Black Lives Matter.” Onlookers and exhibitors, their paths to low-dollar commerce temporarily blocked, offered thunderous applause.

The Mid-American Review dedicated precious real estate on its AWP bookfair table to offer free protest pins, an opportunity, editor-in-chief Abigail Cloud said, for “writers who are more quiet or introverted” to showcase their dissent through the pen and paper medium they know best.

The idea that writers could utilize their richest resource–“their words”–in opposition to the administration was also central to the #IDissentDoYou campaign spearheaded by writers Danya Kukafka, Danielle Lazarin and Celeste Ng. Participating AWP bookfair exhibitors offered free “Dissent is Patriotic” postcards and postage for visitors to share their concerns directly with elected and appointed officials. The stated reason behind the campaign? “Words have the power to create change.”