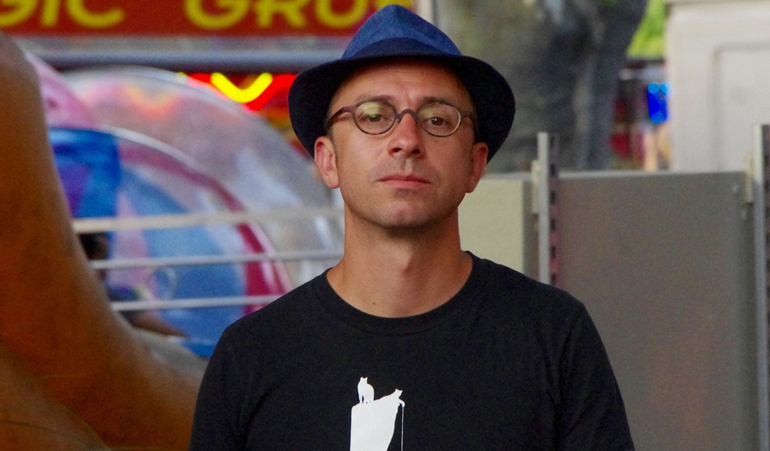 I first heard Jay Baron Nicorvo give a reading in the summer of 2009. I was attending the Catskill Studio for Writing, which Jay ran with his wife, Thisbe Nissen, from their living room in Saugerties, New York. Chickens roamed the yard, and once during a workshop, a mole crept inside and scampered through the living room.

Jay’s fiction mesmerized. I couldn’t wait for a novel. Last month, Jay’s debut novel The Standard Grand released from St. Martin’s Press. (In those intervening years, Jay published Deadbeat, a poetry collection from Four Way Books.) I had the chance to chat with Jay about his work and its intersection with this moment in American history.

Patrice Hutton: Over the past decade you’ve moved from New York City to the Catskills to a farmhouse in rural Michigan. Did this transition from urban to rural impact your writing, be it method or content?

Jay Baron Nicorvo: Oh, sure. Having made a home in both the country and the city, I think I have a more complete picture, and what I see is that the country is often sacrificed to the city. That’s the crux of civilization, as I’ve come to understand it, and many civil wars boil down to the city against the country. Our Civil War, North versus South, was really urban against rural America, industrial against agricultural, slavery made obsolete by the former while still facilitating the latter. And this old conflict—town against country—has flared up again in our current politics.

A fair number of the conflicts in the Middle East amount to the same thing, where, say, you have the rural Taliban railing against urban infidels. You see it in the governmental uprooting of Chinese farmers and their relocation to new cities far larger than any we know in the United States. Farms and farmers as fodder. Got to keep the industrialization machine a-trucking. And we’re not all that different. Here, the relocation doesn’t happen by force. There’s more subtlety to democracy. The rural drain results from the harsh realities of capitalism. Cities have the jobs; it’s where the schools are. I moved to Boston to pursue a graduate degree. I moved to NYC for work. I was also chasing a woman. More women to be found in the city, which makes things far harder, in some ways, on the women. And I wanted to write about all this—and then some!

The age-old conflict you mention manifests itself throughout the novel—rural characters rubbing up against urban ones; country settings in contrast with cities—but the split can be seen, very specifically, in my rendering of the town of Neversink, a real Catskills hamlet that was named in the early 1800s for its elevation above sea level. And then the New York powers-that-be went and sunk Neversink to make the Neversink Reservoir, relocating the town and all its inhabitants. Lives and livelihoods deluged, all so residents of the five boroughs can drink clean water. The country surrendered to the city. Other, older civilizations, like the Maya, sacrificed individuals by tossing them in their drinking holes. Ours, thanks to the modern wonders of the Army Corps of Engineers, sinks entire towns. Never say never sink.

This divide will continue to drive our present red state-blue state conflict. That is, if we don’t destroy ourselves first, and I don’t imagine we will. We’re more resilient than roaches. Come nuclear hell, or the high water of climate change, we will abide, either underground or up some mountain, and I see us headed for a future where the world, what’s left of it, is citywide. Which is a shame, because there’s no better place than the country to raise a child. A house in the woods. Animals all around, domestic and wild. And we now know—cause we try to pay attention to recent findings, which thanks to things like the internet reach us in the sticks—that our son’s immune system and gut biome are far better off for our chickens and all their chickenshit.

PH: Tell me about the intersection of fatherhood and writing. I’ve had the privilege of meeting your little guy, Sonne, and imagine that he grew up against the backdrop of you writing The Standard Grand.

JBN: The novel’s a smidgen older than Sonne. I started it in ’09 and he was born in ’10. Having a first, and last, child in the early going of a years-long writing process—the pregnancy nearly killed Thisbe and Sonne both, and we’ll never go through that again—it brought about a change in my writing, for sure. A shift from self-centered to other-centric. As a new father, I was trying to comprehend the world through the eyes of another, so that I might help Sonne not just to thrive but to simply stay alive. No one tells you that parenting, in the early going, especially with a child born seven weeks premature, is basic life support. (Potential parents out there, for the first two years, all you’re doing is doing your damnedest not to kill the poor thing!) As a burgeoning novelist, I was aspiring to write outside myself, to get beyond my experience, as a way to enlarge my understanding and, hopefully, the understanding of my readers, if I’m lucky enough to reach them.

PH: In your interview with Julianna Baggott, I was fascinated to hear your discovery of the reality of military desertion: “If every soldier knew the Pentagon’s policy on desertion, more soldiers would desert,” to which you said, “In this way, and by this revelation, my novel just might serve some small public good.” In this era of the world needing much public good, I’d love to hear what novels you think might help us not just cope—but expand our understanding, our imagining—in 2017.

JBN: I’d offer a list but I’m list resistant. Lists all commit, by their very nature, grave sins of omission. That, or they can be awfully redundant or obnoxiously esoteric. There’re boatloads of current novels, on countless lists, working to, as you say, expand a reader’s imagining, which was, as I mention above, my secondary aim. My first aim was to expand my own imagining. That’s the route to wisdom, I think. But there is one novel I’ve been mulling more in the wide wake of Trump.

Melville’s Moby-Dick; or, The Whale, that leviathan of a novel, is of those classics I’d strained to pick up countless times and put down, unable to get through it on the page. And then Thisbe and I determined to listen to it, all twenty-plus hours of it, during a long road trip. There are some novels best listened to, and Moby-Dick’s one. I’ve been thinking, too, of the utter financial failure of that novel during Melville’s lifetime, but the Trump presidency has given Moby-Dick new resonance.

The easy analogy is that Trump is Captain Ahab at the helm of the American ship of state. And Melville modeled his blustery captain on the biblical husband of Jezebel, King Ahab, whose transgressions in the Old Testament read like those of a cutthroat real estate tycoon in ancient Israel. But by my lights, Trump isn’t Ahab. Trump’s the whale, or Moby-Dick.

Trump’s the great white hope—thar he blows—and Ahab is the white male voter. Vindictive. Destructive. Determined. To hell with the leaky boat that got us here and all its crew. If we’re not at the wheel, we’ll scuttle the whole damn thing. Trump will either make America great again, or he’ll bring the whole thing down, and either way, white male voters win. Cause they’ve got all the guns. Or so the sad, shallow thinking goes. As for public good? I think Moby-Dick helped give us the emotional intelligence to turn away from whale oil and toward petroleum, which did a fair bit of good—for whales especially—and for a time.

Now we need help turning away from petroleum. That’s part of the reason I have the oil industry—in the shape of a Houston-based multinational corporation and its chief operations officer—at the dark heart of my novel. But my COO, an old boy by the name of F. Bismarck “Bizzy” Rolling, isn’t the bad guy. Not really. Bizzy’s more like Starbuck, the first mate, though as I wrote him, I had Donald “Rummy” Rumsfeld in mind. In The Standard Grand, the bad guy is me. I’m the president and CEO—my novel is, after all, published by the American media-industrial complex—and I’m fucking it up for everyone, ruining all the lives of the characters, my citizen employees. This is novelist as a hapless Trump, who I don’t doubt is trying—miserably, ashamedly—to do some public good. Rich dumb bastard.

PH: Follow-up to the above question: the months following the 2016 election had (continue to have!) a lot of us staring in the mirror, and many writers have mentioned that writing felt impossible for a while. The Standard Grand deals head on with so many issues/questions that have been magnified by the election. How would you say the months following the 2016 election affected your writing life?

JBN: I learned some time ago that I’m not a social animal. I’m a skittish animal, and I can best do some small good in the world by writing about it. My writing is my activism—my writing will reach far more people than I ever will—and I was active in this way long before Trump. I plan to be active long after him. I’ve encountered writers who say that in the jaundiced face of Trump, writing feels like a luxury, or a privilege, or a waste, or just plain impossible. And I sympathize with that impulse, but I don’t share it. Writing now feels more possible to me, not less. I didn’t see Trump coming, not in any legitimate way, but I’ve been writing—very deliberately and from my limited but well-educated white working-class perspective—about these issues now for years. Trump validated my worst fears, which is what my writing is largely about. I write to confront my fear. And I’m not alone.

A lot of other wonderful writers have been down in the activist trenches for ages, including Thisbe, who after over a decade of toil, has a new novel due out in January that’s all about the fallout of the second Bush election, how America, under that earlier idiot president, can be seen in the unflattering light of occupied Vichy France. And even though it feels passive, writing is one of our most powerful forms of activism. It’s the reason authoritarians jail authors soon after they seize control.

Too, conflict—social, political, martial—can work as an artistic spur, as long as free speech is maintained. The examples are legion. After a period of adjustment—it’s only been a little over 100 days, though it feels like a few forevers—I imagine more writers, not less, will enter the fray because of Trump, who isn’t going to make America great again. He might well make the American novel great again—MANGA! But I don’t think that’s true either, because the American novel, like America, was, before Trump at least, in pretty great standing, and due to all its flaws, not despite them.