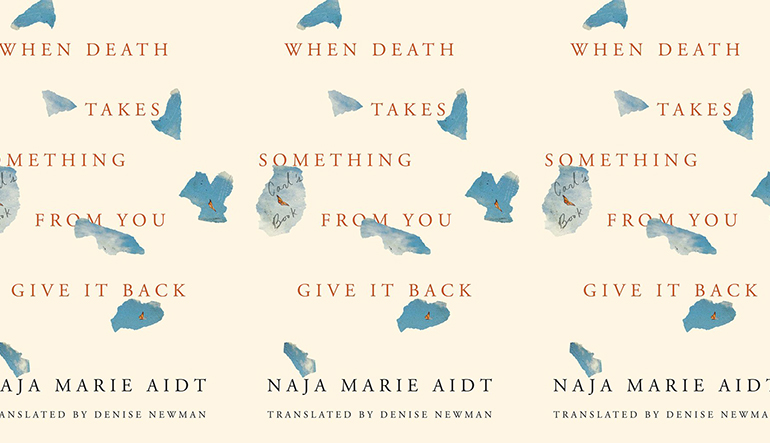 Naja Marie Aidt’s new memoir, When Death Takes Something from You Give It Back, translated from the original Danish by Denise Newman, begins with an epigraph from Rilke’s “The Tenth Elegy.” The lines are all about grief—“The new stars of the land of grief,” the first line tells us, “Slowly the lament names them.” The epigraph proceeds for a few lines, naming the different stars, before concluding, “But there, in the southern sky, pure as the lines / on the palm of a blessed hand, the clear sparkling M / that stands for Mothers……—.” And so begins Aidt’s book, putting a specific form of grief on the mind and heart of the reader—that of a mother grieving her lost child.

On March 16, 2015, Aidt’s son Carl died. His death was an accident, self-inflicted while in the depths of a particularly dark mushroom-induced psychotic state. When Death Takes Something from You Give It Back is Aidt’s reckoning with that death—with how it could have happened to the son that she knew, with why the police’s response to the emergency call of Carl’s friend was so slow, with how Carl could have jumped out of a window to his death but that death not have been suicide, and much more. It’s raw and angry as Aidt yearns for understanding, yearns for her son to not be dead.

As Aidt goes about the Herculean effort of wrestling with her son’s death, she utilizes a remarkable variety of forms; her grief is expressed not only through the substance of her words, but also through the structure of her text. The work includes passages from her diary composed in the years of Carl’s childhood; quotations from writers as varied as Anne Carson, Stéphane Mallarmé, and C. S. Lewis; passages that read like rants at death, at life, at what she’s having to live through (“DEATH WALKS BESIDE US IT IS REAL IT IS NOT CALLIGRAPHY NOT A FUCKING IMAGINED SUFFERING IT IS REAL,” reads one stream of consciousness passage); poems and journal entries pulled from Carl’s papers after his death; and more. All of it taken together leaves the reader with a real sense of the author’s lostness, her groundlessness, of what the death of one dearly loved leaves in its wake. A coherent form no longer seems reasonable, nor possible, in the book Aidt has constructed.

Indeed, Aidt actively wrestles on the page with the idea of making art out of her son’s death—an inherent contradiction in the book she has produced, which is an undoubtedly beautiful artistic achievement. “Beauty has abandoned my language,” she writes. “My language walks in mourning clothes. I’m completely indifferent.” Another passage, from a page-long rambling paragraph, aptly describes Aidt’s conundrum in the work she’s doing: “It’s not possible to write artistically about raw grief. No form fits. To write about actual nothingness, the absence of life. How? To write about the silent unknown that we are all going to meet, how? If you want to avoid sentimentality, the pain stops the sentence mid-sentence. Words sit inadequate and silly on the lines, the lines stop abruptly on their own.” The task Aidt has in front of her with this book is three-fold: to reckon with the death of her son on the page; to create a work of art out of the “inadequate and silly” words her grief produces; and to remain honest to her experience in doing so.

By these measures, the book is a real success. Aidt’s willingness to wrestle with how inadequate and foolish her effort feels, and to leave that wrestling in the book, reinforces the reader’s sense of what Aidt is experiencing. She must pursue understanding; understanding is fleeting. She’s a writer, so one of the ways she can conceive of wrestling with the death of her son is through putting it down on the page; at the same time, the words feel foolish and inadequate. Nothing is sufficient.

The reader’s access to Aidt’s grief deepens through Aidt’s rejection of conventional notions of how text should be laid out on the page. The reader navigates variations of text formatting throughout the book—it’s aligned to the left in some places, and scattered throughout the page elsewhere. The size of the text varies, sometimes in coherent and traceable patterns, at other times seemingly at random. Italics and bold type are used generously throughout—discernibly in a few instances, elsewhere with no traceable intent. All of this textual experimentation cements the triumph of honesty and self-expression that this book becomes—the triumph of honesty in self-expression, complete and unmitigated. Aidt is writing what she will, in ways that feel appropriate to what’s being expressed. Her experience is unorderly; she has produced a text to match it. It’s a testament to Aidt’s translator and her editors at Coffee House Press that the finished version of this book feels essentially unedited.

Her formless work is generated from what feels like a formless life in the absence of Carl, in line with the effect Carl’s death has on her and her community of grievers—“We find ourselves in a futureless time,” she comments at one point. Time itself has lost its coherence; just as form, style, beauty in writing no longer feel tenable, so time has lost its sense of forward movement. “We sit around a kitchen table and survive second to second; we rarely get up. We’ve become rigid, while the spring light rises and falls in the sky outside: Now that you can no longer be in chronological time, neither can we.”

Even still, the reader is presented with a coherent narrative. Aidt employs a smart technique of telling the actual story of Carl’s death within the larger recounting of her grief, within the sensory depiction of that grief. Aidt tells the story in stops and starts, in italicized, set-apart paragraphs. Each paragraph tracks back a couple sentences prior to where the previous concluded, slightly retracing steps in the way, perhaps, that Aidt retells the story to herself—halting, repetitive, delaying the conclusion as long as she can.

As it happens, Aidt’s form-less, beauty-less language of grief is not the only thing that produces its own kind of beauty. Carl’s death itself brings beauty in the despair, and it’s a triumph of this book that Aidt’s recognition of this truth does not come off as trite. Coming as it does near the book’s conclusion, after the devastating majority of the book has imprinted itself on the reader’s mind, it feels surprising when she recognizes it, but not forced.

Aidt recounts two poems that she wrote while Carl was still living; his death was still in the unimaginable future. The first poem begins with the lines from which the book’s title is drawn:

“I thought intensely about you as I wrote those two poems. I saw you before me as I wrote them,” Aidt recalls. She goes on to consider the power of poetry, its role as the receptacle of omens felt but not understood—“It becomes an experience which belongs to the future, which can express, though it is not yet experienced in reality.” There’s another quality to poetry, though, that Aidt chooses to highlight: “But poems also say something about the giving back what the dead gave us when they were alive. That the dead’s being in a way still needs a place in life, and we should pass on the love they gave us. Here lies the hope. A hope that what you gave me will grow in others, if I am able to share it. And that my love is strengthened and made more beautiful because now it contains your love.” Aidt’s loss will never go away, but her hope, even in the midst of her pain, is that she can harness the love she received from her son. That good may come, even from this—a conclusion that feels trite in my writing, but earned and true within Aidt’s work.

Books change based on who is reading, though as a reader, the default I have to push against is to universalize my own sense of a book. This book, however, had me particularly conscious of my identity as a reader—namely, as one who has never experienced such grief, and never will experience this particular type. This, of course, deeply informs my reading experience. When I read this book, I see its structural and emotional intelligence and honesty, and recognize it as such. I imagine, for a mother reading this book—for one who knows the horror of which Aidt speaks—that it reads more like recollection.

Tags:Naja Marie Aidt, When Death Takes Something From You Give It Back