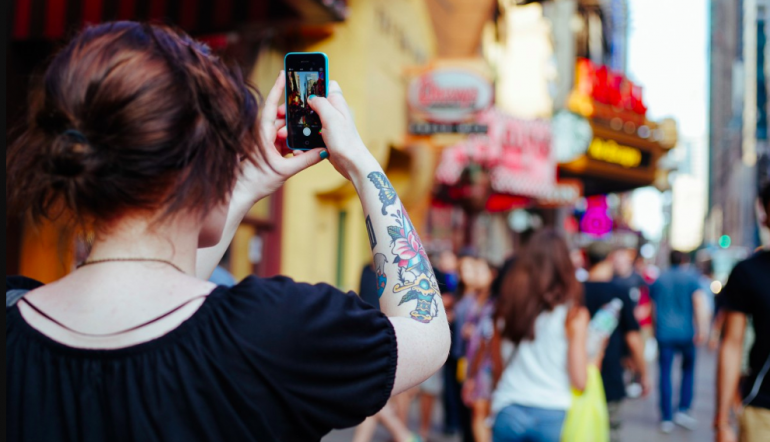 “I don’t talk a lot at school,” says Kayla, the main character of the new indie film Eighth Grade about the difficulties and awkwardness of growing up as an adolescent girl in the tech age.

The vlogger by night looks directly at the camera built into her computer.

“But if people talked to me and stuff, they’d find out that I’m like, really funny, and cool, and talkative.”

The shot switches to Kayla facing the viewer in a locker-lined hallway at school, standing in front of two girls, their backs to us.

The camera swivels to the girls on their phones. “What?” one of them says, barely looking at Kayla.

That awkward moment, as seen in the film’s trailer, encapsulates the difference between online and off-line personas, as well as the effects of technology on how we think and act.

The impact of technology on our daily existence has become a subject worth contemplating, following reports that tech CEOs have been sending their children to anti-tech schools and the publication of anecdotes about Steve Jobs and Bill Gates limiting their own children’s screen time. We should all consider our relationship to technology and how it changes us. But the subject is especially important for writers to think about.

Writers, like all artists, experience things twice—once in the moment, and again when attempting to draw out the details of what has happened to bring a work to life. In the digital age, however, many experiences have been stripped of vibrancy. Most online experiences are devoid of voice, touch, smell, taste, and that indefinable sense of the invisible chemistry between human beings. These parts of the human experience are invaluable in creating believable and profound writing.

Ironically, we’re also living at a moment of peak sensory overload. Information in the form of words is so plentiful that it has become a cacophony. We’re suffering from the consequences of too much of a good thing. This is a danger that is only more acute for writers who, in living through words, are more sensitive to the unfiltered stream of “content” and are that much more distracted from engaging with the stuff of physical life because they’re grappling with so much input.

Alvin Toffler predicted this information glut and its consequences as early as 1970 in his foresighted book Future Shock. Having too much information available, he says, messes with our ability to think, which in turn, undercuts our ability to react rationally to our rapidly changing environments. He writes that sanity is dependent on the information we take in and that:

Ultimately, Toffler writes, there is only so much “sensory input” that we can take in, process, and remember, and thus, the situation of “information overload” (a term he has been credited for coining) becomes exponentially worse.

For writers, this is deadly. Writers have a natural tendency to collect information, gathering scraps of overheard conversations, brief news items, the verbal gesticulations and posturing of teenage boys sprawling over subway car seats on their way home from soccer practice, the incense-like smell of a grandmother’s jewelry box. Add the endless wormhole of internet-sourced information to the ever-increasing library of a writer’s mind, and you get paralysis.

In the end, that means writers simply can’t write. To be able to write is to absorb items of influence, all other books read, along with sensory details experienced before leaving all of that aside to create something new. While research is essential to well-written stories about places and time periods the writer hasn’t experienced, research and information won’t save a story that lacks the sense of why human beings act as they do.

Authenticity is certainly what’s lacking in the lives of the characters of Eighth Grade, to their detriment. The kids try to create identities through posting of representations of themselves on Instagram and Snapchat; their phones momentarily allow them to hide from their own overwhelming insecurities. We see as a result that while it has always taken bravery to live through the awkwardness that is adolescence, it now takes more bravery than ever to rise above the insecurities of this phase to carve out an authentic, satisfying life.

The same is true for writing. Anyone who says writing is easy is either deluded or insecure. Writing well is a task for the brave and the foolhardy, especially in the digital age. Writing well is to dare to make mistakes, to expose oneself, and to take the chance that everything might not be right or perfect. No amount of information gathered from the Internet or books can prepare a writer to write. The only way to really write is to dare to do it.