Home
»
Interviews
»
“Writing is its own country”: An Interview With Mark Haber 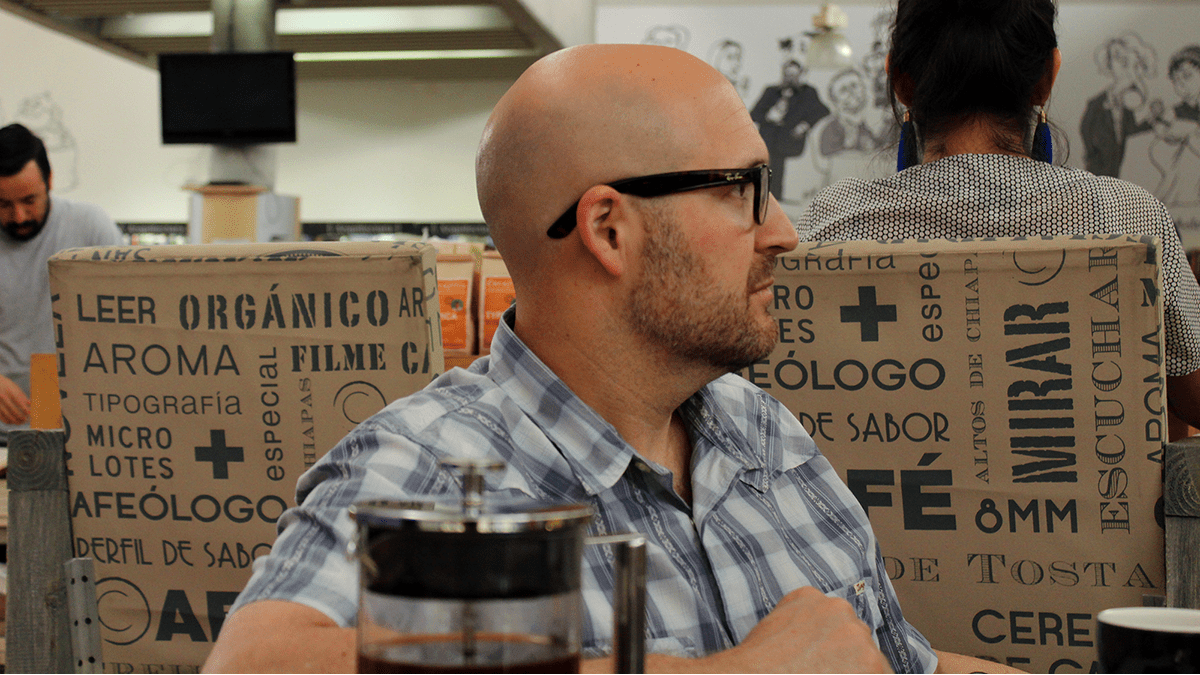 Mark Haber is perhaps one of the most influential yet low-key of tastemakers in the book world. What Haber reads, people buy (myself included), because you know that when Haber recommends it, it is the real deal. And months ahead of the curve at that, a sneak peek into what book blogs and creators of book prize long lists and occasionally major book critics themselves have yet to discover. Mostly, the books Haber reads are incredible, ground-breaking works of literature in translation—often works from Latin America—which has made him known among the most prestigious circles of Latin American literature. For many people in the English speaking world, before they had ever read writers like César Aira, Guadalupe Nettel, Daniel Saldaña Paris, or Rodrigo Hasbún they’d probably heard of them through Haber first.

His literary criticism can be found in places like the Rumpus, Music & Literature, LitHub, and the Quarterly Conversation among other outlets. From 2016 to 2018, he was a judge for the Best Translated Book Award. His short story collection, Melville’s Beard/Las Barbas de Melville (Editorial Argonáutica)was translated into Spanish and published in Mexico in 2016. His debut novel, Reinhardt’s Garden, is forthcoming from Coffee House Press in 2019. I talk with him here about contemporary absurdism, literary influences, and the most terrifying thing he’s ever written.

Daniel Peña: Most of what I love about Melville’s Beard is that you’re able to explore radical truths about people and society that, once exposed, are incredibly hilarious but then, upon further inspection, are also kind of terrifying in their uncanniness to the contemporary era. These are stories, but they almost read like warnings. How do you see absurdism resonating with the contemporary era?

Mark Haber:What’s essentially great (and sad) about humanity is that we don’t really evolve. We like to think that we do, but we’re basically the same creatures we were thousands of years ago, with a few more toys perhaps, but essentially the same. Not discounting the advances we’ve made in medicine and science and the miraculous things we’ve achieved, but from the vantage of an absurdist or satirist, humans are remarkably easy to poke fun at. I recently read The World Of Yesterday by Stefan Zweig (which is incredibly sad but also beautiful and informative) and anyone will see we’re in the same place most of Europe was in the 1930s. As a species, I see no proof we improve.

To be honest though, absurdism or satire is not what I’m always going for. I’m not a premeditated or contrived writer. “Contrived” has a bad ring to it, but all I mean is I simply try to tell a story and my mind or imagination takes over the driver’s seat. I don’t ever say to myself, I have these opinions about these things or I’d like to make a statement on this characteristic we all have. I never do that. It’s much more organic. The story will dictate what I want to say, not the other way around.

DP: Your writing in Melville’s Beard has been compared to Franz Kafka, César Aira, Italo Calvino, and Jorge Luis Borges among other very cerebral and talented greats of world literature. How do you feel about these comparisons, especially as a writer rooted in the American experience? And which writers do you feel are actually your strongest influences?

MH:I love the writers you mentioned and they’re some of my favorites. I forget which writer said it but he/she basically said that writing is its own country. If you put a plumber from Italy and a plumber from Australia in a room they’ll have a lot more in common than if you simply took two people from Australia and put them in a room. I am rooted in the American experience because it’s all I know, but I feel a stronger kinship to Javier Marías, for instance, or Mercè Rodoreda than a person who grew up in the same city as me. I really believe in the kinship of writers. So my influences are much more international.

It’s not that I don’t love and admire Flannery O’Connor or Raymond Carver or Joy Williams and so many others, but the American landscape doesn’t spark my imagination. I wish it did! But nothing about it triggers anything in me. I don’t think it’s a failing in my surroundings either, but a failing in me. Consequently, writers like Aira or [László] Krasznahorkai speak to me and [so do], by extension, their translators (translators are like magicians; they’re the keyholders, and I’m thrilled they’re beginning to get the attention they deserve).

Anyway, my imagination just doesn’t work that way, I can’t find much to write about in the mundane. I love the idea of going somewhere other, not exactly fantastical, but not the everyday. I also love the idea of mixing high and low culture. [Saul] Bellow was a master of this. I’m not exactly a subtle writer and I sort of envy subtlety; I knew a long time ago that I would never be subtle. Yet when I read writers like [Louis-Ferdinand] Céline or Thomas Bernhard, I’m reminded of the twisted magic of mania.

Also, I don’t have any connection with MFA programs or the writers/authors that come from that world and the MFA seems to be an especially American phenomenon. Truthfully, I loathe the idea of “workshopping” or “discussing theory” with a lot of other writers, it seems like the perfect description of a nightmare! I grew up obsessed with [Fyodor] Dostoevsky and later Kafka and later Virginia Woolf and a little later [Roberto] Bolaño and these were people who went out into the world and experienced life (or in Kafka’s case, shrieked at life) and that’s what I always wanted.

This is not a criticism of MFA programs. I know they do a lot for people and these people are experiencing life obviously, but I knew when I was 19 that I wanted to write and so I simply read voraciously and wrote and wrote until I wasn’t so embarrassed and eventually I got down what I saw in my mind. During all of this I waited tables, worked at a bed and breakfast, taught middle and high school and so on. To me, these jobs were always more “literary” than being on a campus sharing stories with other writers. I have a romantic notion of writers. I can’t help it. I probably take it a bit too seriously and am likely insufferable about it, but Thomas Bernhard eschewing Austrian society or a young Bolaño working at a campground in Spain, those lives inspired me.

My strongest influences are probably very obvious, but Saul Bellow, Laszlo Krasznahorkai, Clarice Lispector, Thomas Bernhard, Merce Rodoreda, Roberto Bolaño, Céline, Enrique Vila-Matas, [Vladimir] Nabokov, Cesar Aira, Donald Barthelme, Virginia Woolf, Horacio Castellanos Moya and a ton more, but those are the ones I really cherish. As “American” as Saul Bellow is, he has always struck me as a very foreign writer. Yiddish and Russian were spoken in his home growing up and although his concerns were largely American, his voice and style has always struck me as somewhat foreign.

DP: What are some influences that might surprise your readers?

MH:Probably poetry. I love poetry. I’ll usually read poetry to inspire me and give me images and turns of phrase. I’ve been obsessed with Alejandra Pizarnik for the last couple of years. I think Extracting the Stones of Madness should be read everywhere. I don’t understand all of it, but it’s so visceral and powerful. She really cracks open the universe or the “inner-universe.” Her book is always on my nightstand. Also, these eerie short works by Samanta Schewblin and Cristina Rivera Garza just amaze me. Sort of horrifying and profound at the same time. I also love the Norwegian writers Tomas Espedal and Jon Fosse.

DP: What is the most terrifying thing you’ve ever written?

MH:I was probably around 14 when I took my first stab at fiction. I wrote, I don’t know, about twenty-five pages of a novel and we had these intercoms in our house that never worked; they were there when we moved in. Anyway, the one in the bedroom that I shared with my brother had been removed for some reason and I took the pages (they were in a folder) and dropped them into the hole in the wall. So if those pages were ever recovered they would probably frighten the hell out of me!

DP: What are you working on next? I hear you’ve got something coming out with Coffee House Press.

MH: Yes. I’m elated. It’s a novel called Reinhardt’s Garden. It takes place at the turn of the twentieth century and I’m extremely proud of it. It’s a very stream-of-conscious narrative filled with mania and incident and influenced by Thomas Bernhard as well as other books that have informed me—Heart of Darkness, Zama, Krasznahorkai’s The Last Wolf. It goes back and forth between the South American jungle and Europe. It will be published next fall and it’s everything I have been working toward. I’m really excited to share it.