It snowed today. It was supposed to snow, but only for a minute, and it was not supposed to stick.  Instead it snowed all day and as the sun went down at 4:30 (alas) the snow was still there on the lawn.  And while part of me is so not ready for the onset of sneaky snow days, another part was perversely pleased. It was an object lesson in waiting for things to add up. 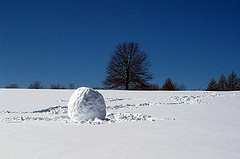 For the past few months, I’ve been waiting for my writing to add up. I’ve written a short story, attempted a return to the beginnings of a novel, but have mostly been reading and casting about for my next project. Lately, one-off stories or essays don’t feel like enough. I’m looking for something bigger to wrap my arms around. It’s not writer’s block—I’m still writing—but I want my work to add up to something larger. I don’t want snowflakes. I want snowballs.

In writing, there’s a process of thought and accrual that happens before an idea is fully formed. It’s a largely invisible, idiosyncratic, highly disorganized process that I still haven’t figured out. Perhaps a surrender to the chaos of it is what’s necessary, even as I crave purpose and order. 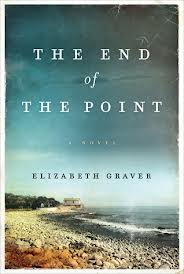 A case in point: this week I began reading The End of the Point, a lovely novel by Elizabeth Graver that was recently long listed for the national book award. I’ve read Graver before, and I knew that the book was set in New England, but it turns out that it is set in the town where I live.

Now, I’ve lived in New England most of my life and I’d never heard of this place before I moved here for work. For the past year I’ve been thinking, exactly where the hell am I? What is this place? And why, again, am I here? Then from the bookish ether, I pluck this story set here, where I am, showing me what this place is, what is has been, and how it might matter. While I’ve been caught up trying to understand what this place might mean and if there’s anything here to inspire me, Graver has found the point.

She writes of a family that comes to my town each summer, generation after generation for more than fifty years; worlds and lives I’d never considered. It turns out there’s plenty of writing material here, living in a summer town year round. There’s also plenty of writing material in living here and dreaming of a home elsewhere—what I think of as pulling a James Joyce. My dislocation doesn’t really matter. Sure, in my day-to-day life, it’s distracting and somewhat time consuming. But for writing it’s good. There’s material here if I want to collect it. Good wet snow that will stick.

The shape that material will take, well, that’s another problem altogether. Like Graver, I am looking to impose greater meaning on my place, on my writing. To have it accrue over time. Yes, there is patience involved, but also intention, effort, thought. I just finished a big project and can’t help feeling: haven’t I done this part already? Didn’t I just do this? With each new project, I must, as everyone must, start again. I must sit with my loose ends, scrap paper, and shadowy ideas that hover but never seem to catch hold. So much of the effort of beginning something new doesn’t appear on the page. It’s an invisible grappling; wrapping your mind around ideas, hefting them for durability, letting them loose to see if they have legs. I can only write for so long without purpose and intention.

So somehow, while I flail, my mind maintains its logic, seeking out what it needs, testing out its theories—even as I, ostensibly the owner of said mind, struggle to find coherence in its meanderings. I can only hope that once again, like last time, the point will emerge. The snow will accumulate.