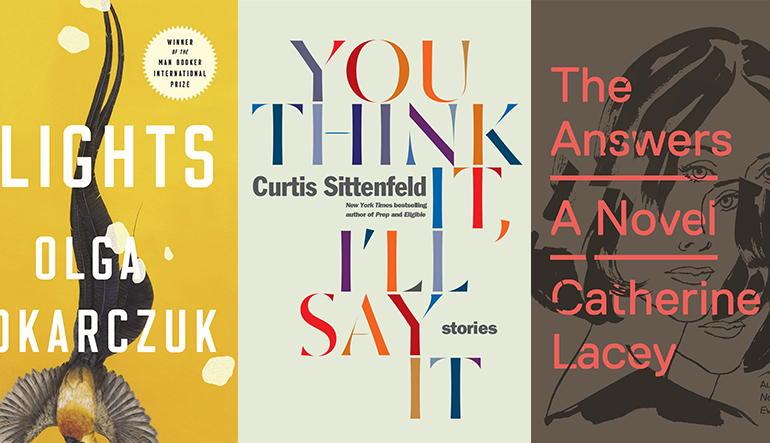 Curtis Sittenfeld’s story “The Prairie Wife,” originally published by the New Yorker in 2017 and included in her new collection, You Think It, I’ll Say It, is about relationships: relationships between spouses, between parents and children, and between friends present and past. It’s a story about the pains and pleasures of domesticity, and about the inconvenient ways the past intrudes upon the present. But it’s also about Twitter. In fact, the first three pages of the story chronicle what’s happening on the protagonist’s screen. It’s social media—and the characters’ relationship to it—that catalyzes the story, that helps us understand the central characters, and that enriches the language and tone.

Years ago, when I was taking writing workshops in college, my teachers would sometimes dismiss the inclusion of millennial technology—social media, smart phones, apps, and the like—as gimmicks that could undermine a story’s timelessness. The implicit argument was that technology in fiction ages fast. In the time since those discussions, however, I’ve read many novels and stories that represent millennial technologies with nuance, humor, and a touch of the uncanny. Reading Olga Tokarczuk’s Flights, Catherine Lacey’s The Answers, and Sittenfeld’s “The Prairie Wife,” I found depictions of millennial technology that made me look at the familiar tools of life in 2019—Wikipedia, my iPhone, email—with new eyes.

This is, of course, what good fiction does: it encourages the reader to look at the world frankly, to make the quotidian seem new and fresh. When these three authors engage with technology, they represent a central paradox of our devices: that tools designed to give us information often become portals to mystery, and are themselves mysterious. The ways characters react to technology often cuts right to the core of their fears and desires. In these novels and stories, the inclusion of an iPhone is about much more than making the story seem current.

In Flights, Tokarczuk tackles the mystery of Wikipedia head-on. Tokarczuk’s fragmentary novel is full of reverence for everyday occurrences, and when she writes about Wikipedia, it’s with a mix of amazement and subtle humor. “As far as I can tell, this is mankind’s most honest cognitive project. It is frank about the fact that all the information we have about the world comes straight out of our own heads,” she writes. Just after she describes Wikipedia in this generous, awe-struck tone, she then questions the project:

Sometimes I start to doubt that it will work. After all, what it has in it can only be what we can put into words—what we have words for. And in that sense, it wouldn’t be able to hold everything after all.

We should have some other collection of knowledge, then, to balance that one out—its inverse, its inner lining, everything we don’t know, all the things that can’t be captured in any index, can’t be handled by any search engine. For the vastness of these contents cannot be traversed from word to word—you have to step in between the words.

The more that is known and recorded, Tokarczuk suggests, the more mystery arises. Her rumination on Wikipedia becomes a way to talk about the failures of human knowledge, the marvels and shortcomings of language, and the collaborative ways in which we catalogue and  make sense of the things we’ve found out. Her description brings the reader into a new way of seeing.

Alienation from the familiar is a pattern that runs through Catherine Lacey’s The Answers as well. The novel exists at the intersection of psychological realism, satire, and speculative fiction. One of the protagonists, Mary, who narrates two-thirds of the book, spent her early life raised off-the-grid in Tennessee. As a young woman in New York with a constellation of mysterious health problems, estranged from her family and desperate for money, she answers an ad to take part in a vanity study on romantic relationships commissioned by a wealthy actor. The novel is about how people find, build, pretend at, and lose human connection. Because it’s set in the present, this question is inextricable from questions about the ways in which technology impacts relationships.

Mystery and technology are intertwined in the novel. This makes sense on a character level: Mary doesn’t have Facebook, hasn’t had a smartphone before she enrolls in the study, and works at a quickly-obsolescing travel agency. A friend of hers disappears, and strange dispatches materialize via email. At the novel’s end, when the truth emerges about the study in which Mary’s been involved, she learns the details not from a person, but from Google. Here the narrator describes the process of Googling someone; in the passage, the simultaneous strangeness and familiarity of a phone is embedded in the language: “I found the GX phone . . . and it was, as they say, dead, so I plugged it in, waited for its resurrection, its messages—none—but I soon found how easy it was to find people’s names and numbers and where they lived.”

Much of the descriptions of social media and technology in The Answers come towards the end of the novel, after the experiment has been exposed and when Mary is growing increasingly isolated inside her apartment, rarely leaving, ordering all her meals. The frenetic language used to describe social media contrasts with the simple sentences that describe Mary’s physical life. The following is the description of a high-profile philanthropic dinner in New York, in which social media reacts to a dress that obscured the wearer’s face:

A hashtag immediately sprang up (#baglady), gathering reports from inside the Gala. (Some speculated it was botched plastic surgery, while others thought she might be an android, as she was robotically motionless for the entire evening, and for a while it seemed to echo a stunt by an emerging L.A. performance artist who had, only a few weeks before, sat in a gallery for fourteen hours a day with a similar bag over her head as every episode of every season of Game of Thrones played and played and played.)

The tone is frenetic, offering speculation but no explanation. The internet updates constantly, never getting close to the truth of the matter. Lacey is satirizing social media, but also demonstrating how information and conversation ultimately circle around, rather than open up, the mystery being investigated.

It’s a similar sense of inundation that opens Sittenfeld’s story. In “The Prairie Wife,” the chatter of social media is amplified in the condensed short-story form. While Lacey’s Mary confronts the breadth of social media on her phone, Sittenfeld’s Kirsten is swallowed up by its depths. Just as social media can seem vast and impersonal, Sittenfeld represents how it can be painful because it feels intensely personal. Kirsten has fallen into the familiar habit of obsessively checking the social media of someone she once knew, who has become wildly successful. If Tokarczuk and Lacey have the novelist’s luxury of ruminating about the internet, Sittenfeld captures it with concision:

Almost all of Lucy’s vast social-media empire, which, of course, is an extension of her lifestyle-brand empire (whatever the fuck a lifestyle brand is), drives Kirsten crazy. Its content is fake and pandering and boring and repetitive—how many times will Lucy post variations on the same recipe for buttermilk biscuits?—and Kirsten devours all of it.

Kirsten’s relationship to the internet immediately introduces her voice and her central obsession: she consumes Lucy’s feed even as she criticizes herself for consuming it. This passage also tells the reader a lot about Lucy without actually telling us anything about her, again capturing the paradox Tocarzuk and Lacey probe: the simultaneous knowing and not-knowing of the online world.

Though these three works are vastly different, the cadences used to describe social media within them often mirror each other. There’s a reluctant reverence, a preponderance of parenthetical or hyphenated qualifications and clarifications; there’s a rush of words, long sentences that dazzle the reader with their frenetic specificity. The language used to describe millennial technology is varied and complex, but reading it we have the sense that we’ve made something big, rapidly evolving, and somewhat out of our control.

This piece was originally published on August 5, 2019.