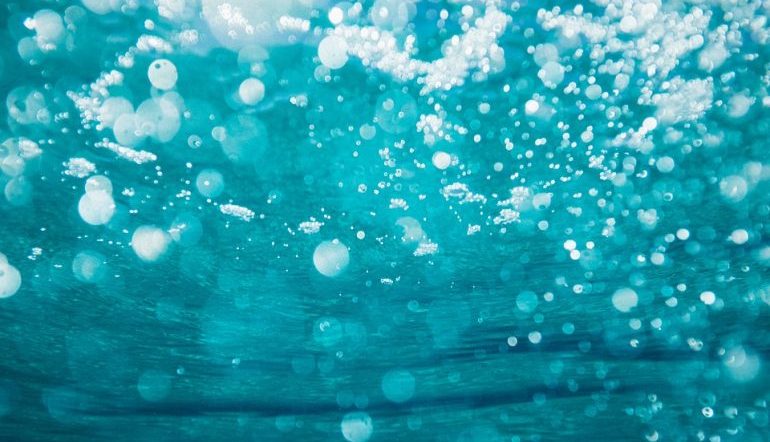 This week, we welcome our new Get Behind the Plough blogger, Aimee Nezhukumatathil, who contributed poetry to the Winter 2008-9 Ploughshares and is the author of two poetry collections published by Tupelo Press, At the Drive-In Volcano (2007) and Miracle Fruit (2003). Aimee, blogging on Mondays through August, replaces Scott Nadelson. We say a fond farewell to Scott, whose wife, Alexandra, just delivered a baby girl, Iona Patricia Opie Nadelson, and we welcome Aimee, who just a few days ago gave birth to a son, Jasper Rosendo Parsons. As Aimee’s first post points out, childbirth and its aftermath can be creative in more ways than one…

Guest post by Aimee Nezhukumatathil
Okay, so I am not really writing this while underwater. I like to think of it as my “coming up for air” part of the day: the early morning hours, when I rise from my sweet slumber and the whole house–save for me and my three-year-old son’s goldfish, Rocketship–are the only ones awake. This is the time I finish dreaming while sipping my coffee, check the lily garden for beetles and weevils, pull any draggled weeds. Write the foundation of notes for a future poem in my journal.
Reader, I am nine months pregnant. I am trying to savor every last bit of this delicious (if slightly swollen) summer time. I’m reading The Cradle by Patrick Somerville; knockout poetry by Keetje Kuipers and Jericho Brown; dipping into my stack of spring and summer literary journals; and sampling a bevy of style and gossip magazines, just to keep things light and breezy.
So much of the advice I was given when I was pregnant with my first son was along the lines of, “You better hurry and write as much as you can, get that proposal done–you’ll never get it done when the baby arrives.” And so on and so on. I know my pals were well-meaning, but it was like they secretly wanted to infuse as much panic and preparation into me as for a natural disaster. My parents, who live in central Florida, in the very county that was smashed with not one but four hurricanes in one summer, keeps a whole closet filled with disaster food and supplies like canned fruits and veggies and their very own Water Bob. “Is so good to be prepared. You don’t want to be stuck with bird in a bathtub like us, do you?” my Filipina mother says (in 2004, they did in fact find shelter in their bathtub for hours on end with their beloved cockatiel, Chico, as they prayed the roof of their house wouldn’t blow away during a storm). I felt like if I wasn’t storing up anecdotes and journals now for some writing later, I’d be unprepared when the hurricane of a new baby arrived.

And when the new baby arrived–oh, how I wanted to snuggle and breathe in deeply the salty-sweet baby smell and bottle those days of no sleep and giddiness with my husband. But soon, I wanted sleep. And when I did get sleep, I wanted to write. I wanted to write down all the details of the first few months of being a mom, but also, I was overcome with a pulsing need and want to write about anything besides motherhood and diapers and feedings and diapers. Even one hour alone at our local coffee shop/bakery was pure release and clarity of mind–a sweeter heaven in the middle of Western NY’s already sweet strawberry season.

Oh, I was in love with my new child alright–deeply, madly, truly–but if there was one lesson I learned from my mother and writer-mama friends, it was the notion that Mamas who write/work/teach/(insert any activity that gets you out of the house once in awhile and, yes, that includes stay-at-home moms, too) set a good example for their kids. The way I see it is–Wouldn’t you want to model being a happy parent and finding something you are reasonably good at and love to do, and then spend some time, you know, actually doing it? And it wasn’t long before everyone in the house (baby included) learned that when Mama has just a leeettle bit of time for her writing, everyone is happy. I know with all my heart that I am a better, more attentive and active Mama because I write. I don’t spend my days building block towers with my son while secretly wishing I was somewhere, anywhere else with my laptop. And when I am writing, I can hone in with a clarity and focus I never had in my writing life, not without unseemly amounts of caffeine, anyway.
Full disclosure: My writing time has easily been slashed to bits since the arrival of my son. And I fully expect it to be slashed even more when the next one comes along. I am aware that I am blessed to have quality daycare when I need it and a wonderfully supportive writer/editor husband Who Gets It. But there are always things in your day that could get rearranged or rescheduled, or even snipped entirely, so that you can have that hour or two to write. Always. Less internet. Turn off (or get rid of!) the television. Learn to start saying No. Block out your days on a (loose) schedule. Order a pizza (and don’t feel like a Martha Stewart failure when you do).
And that is just the beginning of how this former night owl found a whole pack of beautiful hours all for herself just waiting at the beginning of the day. It was not ideal at first. I had fifteen years since I left for college of keeping late-night hours. It certainly wasn’t easy having to retrain my mostly tired body to a new rhythm not seen or felt since high school varsity tennis practice. But these found morning hours are mine, mine, mine–and I find I get more done in those three hours than when I had whole lazy days to myself–even while being single and living in a maintenance-free apartment.
That’s why I like the mermaid/mer-mom metaphor. Mermaids of lore have a fully functioning system and life underwater.
They built whole gilded underwater cities and kingdoms, for crying out loud. Sure, the occasional mermaid stirs up a bit of mischief when she spends too much time ashore and wants to bring down others. But otherwise, I think they live a mostly happy existence, able to find a balance between coming ashore to visit and collect bits of dazzling sun-shell and coral, and then a return to the waters below to join her family, eager to share tales of the new bright thing she just beheld.
This is Aimee’s first post for Get Behind the Plough.
Images: 1 and 2

Aimee Nezhukumatathil is the author of three collections of poetry, most recently, LUCKY FISH (Tupelo Press). A recipient of a fellowship from the NEA and the Pushcart Prize, she is associate professor of English at SUNY-Fredonia.