Home
»
Uncategorized
»
WWTMD? (What Would Toni Morrison Do?) 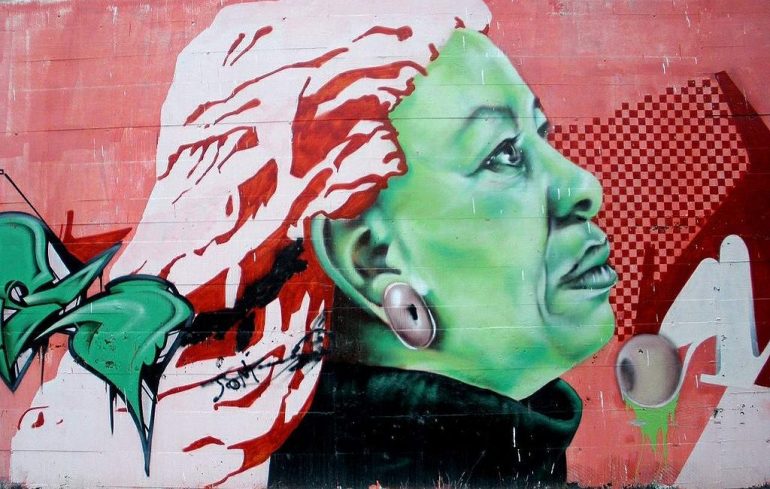 Lately, during the sad, unproductive stretches of writing my first novel, I stare at an empty page and whisper, “What Would Toni Morrison Do?”

This is the closest I come to prayer. Please show me the way, I say to my favorite writers. Please give me the vision to see what I cannot. Unlike most deities, however, the motivations of my favorite writers are knowable. On YouTube, in magazine interviews, and in essays, my favorite writers relate their inspirations and their all-too-human faults. Sure, they hurl lightning bolts of excellence, but they also reveal the failures of the spark.

So, who better to guide me than Toni Morrison, Nobel Laureate, Pulitzer Prize winner, and author of ten novels—including Beloved, one of the most acclaimed books of U.S. literature?

It doesn’t matter that all I have in common with Toni Morrison is my Ohio childhood; I’m not trying to be Toni Morrison. Instead, after teaching a “Major Authors: Toni Morrison” course, I’m trying to apply the lessons I’ve learned from her work, about narrative structure, knowledge, empathy, and community. Here’s how Toni Morrison guides me.

Problem: I can’t figure out how to begin the story.

WWTMD? Toni Morrison would reveal the entire story into the first chapter.

When I asked my students, “What happens in the first chapter of Beloved?” they answered, correctly, “Everything.” As Morrison says, “I put the whole plot on the first page. In fact, in the first edition [of the novels Jazz and The Bluest Eye] the plot was on the cover, so that a person in a bookstore could read the cover and know right away what the book was about, and could, if they wished, dismiss it and buy another book.”

Thinking about my novel-in-progress as a Morrisonian detective story, I wrote a new first chapter set nineteen years after the central conflict. Whether or not this survives revision, putting the entire plot upfront has opened windows I’d never have seen in my original, linear chronology.

Problem: I want to write something as awesome as Beloved, immediately, in the very first draft of my very first novel.

When I close a book, dazzled and smitten, I want to write something equally magnificent. And then, I weep. It takes a while before I remember how many years—and how many other books—it can take to achieve such artistry.

Toni Morrison didn’t start her career with Beloved. She was 39 when she published her first novel, The Bluest Eye—which, by the way,took years to write and received varying reviews. Compared to the whirling blades of her fifth novel, Beloved, and the threaded strings of her sixth, Jazz, Morrison’s first three novels unfold more or less chronologically, in small Midwestern towns, focusing on a single character (Pecola Breedlove in The Bluest Eye), a single friendship (Sula), or a single family legacy (Song of Solomon).

Problem: My novel is historical, but I don’t know anything about history.

WWTMD? Toni Morrison would expand your definition of “knowledge” and “history.”

Though historical, Toni Morrison’s novels are also woven from her experiences. Here, she recollects the family friend who inspired Sula: “What I remember most is how the women said her name: how they said ‘Hannah Peace’ and smiled to themselves, and there was some secret about her that they knew, which they didn’t talk about.” Though curious, she refused to ask her mother about this memory, preferring instead to invent the answers.

Morrison also limits her research. For Beloved, she read only two articles on Margaret Garner, the real escaped slave who murdered her child, because, as Morrison says, “if I had known all there was to know about her I never would have written it. It would have been finished; there would have been no place in there for me. It would be like a recipe already cooked.” In order to move past roadblocks in research, Morrison writes “DK” for “don’t know”—“otherwise you just sit in the library forever.”

Sitting in the library also isolates a writer from the contemporary controversies that might enrich a narrative. For example, who’d have guessed that debates about women’s reproductive rights in the 1980s would deepen Morrison’s understanding of her characters’ choices in 1855? So, when my research turns to rabbit holes, I now look inward to memory and outward to the debates of my own era.

Problem: Some of my characters are mind-bogglingly despicable.

WWTMD? Toni Morrison would ask questions until she understood.

Morrison builds empathy for characters we’d otherwise condemn. To do so, she shifts her vantage point, asking questions from various angles. Some of her inquiries:

If Toni Morrison can inhabit the minds of racists, murderers, and pedophiles, I can surely question my novel’s lesser monsters—and listen to their answers. 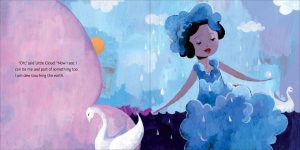 Illustration by Sean Qualls, from Little Cloud and Lady Wind, by Toni Morrison and Slade Morrison

Problem: I don’t know how to end this blog post.

WWTMD? Toni Morrison would end with a return to community.

Of course, Toni Morrison writes multi-layered endings, endings that revise beginnings, endings that whisper a name. But in her 2012 novel Home and elsewhere, the main characters must re-enter a contentious community.

Morrison likewise shows us the power of community. While I may never win a Nobel Prize, I can follow Toni Morrison’s model of literary citizenship. Born Chloe Wofford (“Chloe writes the books,” she says), she maintains the seemingly accessible persona of Toni Morrison. As an editor, she championed numerous writers and compiled a landmark book of African American history. As a professor, she shared groundbreaking literary criticism with her students. With her son Slade, she authored children’s books, including the story of a Little Cloud who, with the help of Lady Wind, realizes her interconnectedness with the universe:

“Oh” said Little Cloud. “Now I see. I can be me and a part of something too.”

Inspiring us to reach for something greater than ourselves? Yes. That’s what Toni Morrison would do.