Home
»
Writing
»
Writing Advice
»
“You start out in difficulty”: An Interview with Dan Albergotti 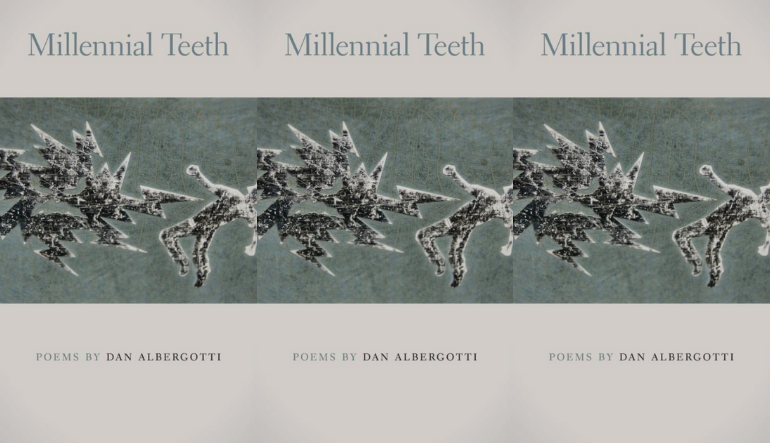 Dan Albergotti is the author of two books of poems, The Boatloads (BOA Editions, 2008) and Millennial Teeth (Southern Illinois University Press, 2014), as well as a limited-edition chapbook, The Use of the World (Unicorn Press, 2013). A graduate of the MFA program at UNC Greensboro and former poetry editor of The Greensboro Review, he is a professor of English at Coastal Carolina University in Conway, SC. Dan’s poems harness inventive (and sometimes invented) formal strategies to give shape to and amplify a deeply human, deeply American voice: like your dearest, oldest friend hunkered beside you at the bar who just happens to speak in couplets.

Matthew Thorburn: Throughout Millennial Teeth one finds sonnets like “December 25, 2005,” written in a very taut syllabic, rhyming form in which each line expands by two syllables, up to 14 syllables, then back down to two syllables for the last line. How did this form come about?

Dan Albergotti: That’s a form I invented about ten years ago, and a good friend has christened it the Albergonnet (a silly name, I know, but I’ve embraced it). When I first imagined it, I thought the tight rhyme at the beginning and end would make the form unwieldy. The rhyme scheme is couplet, so the Albergonnet demands that the writer establish a sound for the initial rhyme in the second syllable of the poem and then provide the rhyme for it only four syllables later. At the end, the last rhyme occurs only two syllables apart. So opening and closing the poem is formally a pretty stiff challenge, so much so that when I sat down to write the first one I thought it would necessarily be a failure.

I was really surprised when it turned out not to be. Then I wrote another, then another, then another, and the results kept improving. I had just been playing around with the elements of form, imagining something that seemed absurd in the abstract, but I think along the way I stumbled onto a possibly durable invention.

I think the Albergonnet’s expansion and contraction connect it in a way to the larger sonnet tradition. You start out in difficulty and then there is a lot of formal relaxation where you can make imaginative exploration, but at the extreme point of that exploration, you must “turn” toward the strict form of the conclusion (the “snapping shut” of the poem, as you say).

MT: There are also four ghazals in Millennial Teeth—including “Ghazal for Children”—that deal in different ways with September 11th. They succeed where many other poems I’ve read about that day just don’t—in part because they approach it indirectly, but also because of the effects of the ghazal’s repeated couplet-ending word. I never would’ve thought this was the form in which one could write a moving poem about September 11th, but it is. How did these poems start for you?

DA: For a long time, I had the same disappointment in (and skepticism about) 9/11 poems. I was the poetry editor of The Greensboro Review in the 2001-02 academic year, and within a week of the attacks, we were receiving submissions of poems about it. And a steady stream continued throughout the year. As you can imagine, those were almost universally terrible poems—emotionally raw without being emotionally powerful, intellectually simplistic, and largely artless. I read so many bad 9/11 poems that I thought it would take a long, long time before we ever saw any good ones and that I’d never want to write one myself.

Of course, my mind began to change on that as time passed and I began to see really powerful poems about the day in print. When I did begin to write about it, the ghazal seemed a natural choice: its natural disjointedness, the obsessive repetition of a word or phrase, and the fact that its origins are Middle Eastern. It seemed somehow right to reach from the West to a literary form from the East in an attempt to understand this horrific event that arose from East/West misunderstanding, miscommunication, and hatred.

DA: One title immediately leaps to mind: Jake Adam York’s posthumously published Abide. Reading that book for the first time was one of the most profoundly moving experiences of my life. Beyond that, your question is very tough to answer because I’ve read so many fine, moving new collections recently. I know I’m going to leave something out. But with apologies to those that should be mentioned, I’ll throw out some titles.

I think these debut collections are all stunners: Shara Lessley’s Two-Headed Nightingale, TJ Jarrett’s Ain’t No Grave, Tarfia Faizullah’s Seam,Allison Seay’s To See the Queen, and Katy Didden’s The Glacier’s Wake. Gregory Fraser’s third book, Designed for Flight, is wonderful too. In fiction, I’ll plug my colleague Jason Ockert’s second story collection, Neighbors of Nothing, and while I haven’t read the entire book yet, I recently heard Jamie (David James) Poissant read two deeply moving stories from his debut The Heaven of Animals. Both Jason and Jamie can move me to tears immediately after eliciting belly laughs. They are artists of the heart.