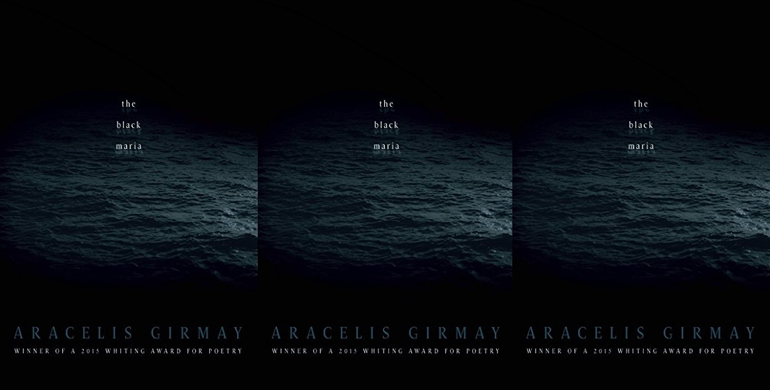 The earth is composed of three layers: the core, mantle, and crust. Perhaps you already knew this; perhaps you also know that if the earth were an apple, the crust would be its peel. Below the eight-to-fifty kilometer thick crust, the mantle and core reach thousands of invisible kilometers of depth. We can infer what occurs there, but humans cannot visit. We (and the machines we create) remain within our habitable convergence of continent, ocean, and atmosphere.

the black maria, Aracelis Girmay’s intricate epic of black survival, enraptures the reader in a gaze that looks simultaneously backward and forward, toward past and future that are impossible to see yet crucial to imagine. The book’s two sections are named in such an opposition: the first, “elelegy,” is a mourning call, a ulalatory elegy, while the second, “the black maria,” gestures outward, to the lunar “basins and craters misidentified as seas” by early astronomers. The poems in “elelegy” construct a collectively-focused history of the black body’s movement across the planet, while those in “the black maria” account daily tragedies and joys of black American survival. Through radical divergences between time scales and speakers, the black maria fashions a radically inclusive black Anthropocene.

“elelegy” begins with a script-like catalogue of “who,” “when,” and “where.” Girmay defines “we, the living,” “you, unless stated otherwise, the dead,” using the collective to implicate the reader while focusing “on Eritrean history . . .” and “a history of people searching for political asylum and opportunity.” In “prayer and letter to the dead,” past generations churn in the waters that drowned them:

Beloveds, beneath the surface
of your last place, the tiny, oblivious fishes

form wreaths above the sea grasses
& their long reach—

Some mornings, in my own city far away,
I run to greet ‘you’ come to me as sea, & carry

myself out into your long, dark time like a child
meeting  its older cousins. I touch your teeth & give you the single word of my body.

Like history’s layers, the sea accumulates vegetation; humanity accumulates our dead tooth by tooth, word by word. Human bodies become a lineage and a setting; the book’s introductory matter lists “the sea” under both “who” and “where.”

To “the surface” of the page, Girmay brings the stories of “your long, dark time”: the history of those who lost or were forced to leave home. Throughout “elelegy,” “fishes,” “flies,” and “stars” haunt the speaker, as if insisting “[t]he Galaxy does not blink for this sadness.” Indeed, it is humans who mourn, humans who “attempt to flee.” Between Girmay’s poems, bracketed notes and italicized epigraphs form a “great storage house, history / on which we rode,” of nonlinear diasporic time. This wealth of background information establishes a narrative clarity within which the lyric sings. Late in “elelegy,” she introduces “the Luams,” four women of the Eritrean diaspora, living in four different times. Through their perspectives, Girmay catalogs the physical, spiritual, and linguistic details of upheaval. She writes:

& below
her breath she began to sing
the wedding song that goes Now
you will stay with your husband’s
family, she had no husband
but imagined distance to be
the one she married

Wide divergences in distance are felt most acutely in contrast. By scaling her expansive gestures through an intimate lyric, Girmay builds and interrogates the vast planetary spaces across which people move.

While “elelegy” places America within the constellation of countries transformed by the trans-Atlantic slave trade, its settings (Asmara, Umbertide, the sea) are (mostly) universalized to the point of seeming mythic. “the black maria,” however, lives in a specifically American space of black embodiment. “I am a farness now, & the moon’s black maria,” Girmay writes in “Third Estrangement, In Memory of Jonathan Ferrell,” whose subject was killed “while seeking help after a car accident.”

“Naming, however kind, is always an act of estrangement,” Girmay writes. As she names and pays homage to those lost to anti-black violence, she presses outward from the earth-bound, using the story of Neil DeGrasse Tyson and the resistance he faced in his study of astronomy as a metaphor for the pursuit of human empathy within an emotional landscape of detachment. Again, Girmay writes into extremes, placing an image of mother and child in direct contrast to an imagined confrontation between a black boy and law enforcement:

My milk pulling down into droplets of light
as the baby drinks & drinks them down
into the body that is his own, see it,
splayed & sighing as a star in my arms.
Maybe he will be the boy who studies stars.
Maybe he will be (say it)
the boy on the coroner’s table
splayed & spangled
by an officer’s lead as if he, too, weren’t made
of a trillion glorious cells & sentences. Trying to last.

The child against the speaker’s breast is part of the same fragile present as the child “splayed & spangled.” As Tyson tried to study the night sky, he was confronted by police, threatened for being a black child in pursuit of something beyond this earth.

The juxtaposition between these encounters may risk sentimentality; yet, as in all of Girmay’s vast oppositions, each holds real stakes. Their emotional extremes are not hyperbolic because they are so tangible. Jonathan Ferrell, Renisha McBride, Trayvon Martin, and many known and unknown others have been and are being killed because their black bodies were misidentified as threats. Their names accumulate on the present’s thin page, asking the reader to carry their “estrangements” into this diasporic Anthropocene. As she calls these lost ones to mind, Girmay stands on the molten heat of history conjuring a future for the “splayed & sighing” child.