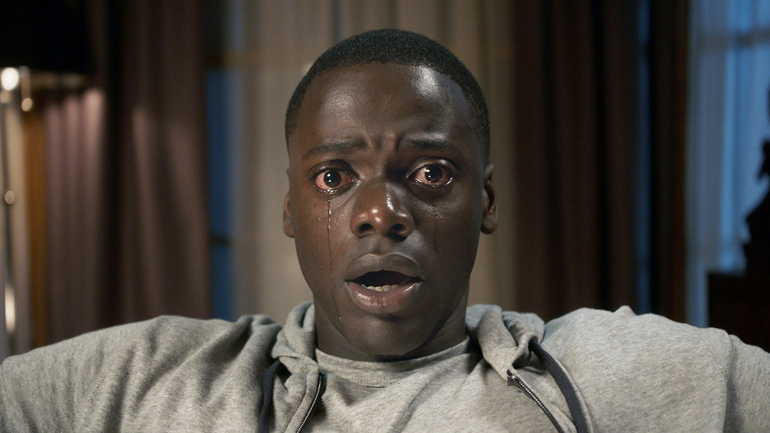 The entry point to Zadie Smith’s latest essay for Harper’s Magazine “Getting In and Out: Who owns black pain?” is Jordan Peele’s critically acclaimed and culturally revered film Get Out, in which the director strategically juxtaposes the harsh racist realities that black people face daily with the unimaginable horror of having our bodies literally inhabited by the brains of white people. Smith bravely tackles the symbolism, the political and social commentary, the black fear and suffering that Get Out addresses while placing its content on a much broader scale. The way that America fetishizes, dehumanizes, and brutalizes its black populations is ingrained in its very fiber; Get Out doesn’t expose this as much as places a microscope on it. Smith does a fantastic job of verbally extracting the ritualized pain of blackness through the eyes of Peele.

Despite Smith’s powerful and undeniable ability to employ and maneuver language the way she does, “Getting In and Out” comes up short for two very vital reasons. First, by making herself the focal point in a discussion about who is truly subjected to black suffering, she fails to take into account the valid experiences of other black folk that fall outside of her realm both personally and historically. Secondly, Smith approaches the intricate and sensitive subject matter of colorism and racism and cultural appropriation with promising insight, yet doesn’t give herself enough space to unpack it. Instead of delving deep into what these concepts really mean pertaining to the way black people have been, and continue to be, oppressed, she merely basks in her own shallow undertaking.

This point is quickly illustrated when Smith conjures up then disregards the powerful words of activist and author James Baldwin as he challenged white people to explore why they invented the term and concept of “nigger.” Smith then insists that the black body is seen as universally desired and welcomed in even the most elite social circles. Smith, who is a biracial black woman with very light skin, omits the historical complexities and benefits of colorism entirely. She associates her blackness not with experiences or cultural traditions, but with having “afro-hair” and brown skin. This superficial analysis trickles down to her children—whose father is white—who are labeled by Smith as “quadroons” with “green eyes and yellow hair.” She questions their ability—because they look white—to consume and understand black suffering because she has a hard time doing so.

Smith uses the painting of Emmett Till Open Casket by Dana Schutz—in which Schutz abstractly reimagines Till’s brutalized body—as the catalyst for her confusion when it comes to who can be allowed to delineate black pain. Eric Fischl’s A Visit to?/?A Visit from?/?The Island, which contrasts the image of rich white beachgoers with dying black refugees, is also mentioned in the essay by Smith. Fischl is a white artist, and his work adds fuel to Smith’s argument that discounting cultural appropriation (Smith lazily defines it as “things that are ours and must not be touched or even looked at sideways”) only promotes autonomy to art which is meant to be consumed by everyone. She goes on to say that appropriation is often associated with racial essentialism and even conflates it with miscegenation laws that existed before the Civil War. That because she looked at Schutz’s painting and felt nothing, does it really matter who can artistically relay Black suffering—regardless of race?

As Smith asks these questions and makes these assumptions, it is clear that she is more interested in being an ethnographer to black culture than a black woman. Although she states that she is identified by herself and others as black, she centers whiteness in an essay that was supposed to focus on black pain. She measures blackness only by its physical proximity to whiteness. While Smith acknowledges the complexities of being biracial, she doesn’t probe her privilege of having light skin nor does she pay the same attention to what cultural appropriation actually is. Smith, like Kenan Malik in his New York Times op-ed “In Defense of Cultural Appropriation,” views it as a particular population of people guarding their culture in a malicious manner and not factoring in our justification for being so protective of it. Since black people were brought to this country, our bodies have been commodified for labor, for sexual exploitation, and even for entertainment.

Cultural appropriation isn’t met with disdain in the black community because we don’t want to be touched or looked at; we want our traditions to be treated with respect and placed in a lens where its originators are given proper acknowledgement and credit—not totalitarian ownership. By placing Schutz’s painting as a top priority in the piece when it comes to who can depict Black death, Smith completely misses the point that no one should. And while some believe that translating all aspects of the black experience (including trauma) into an artistic medium promotes compassion and honors their lives, no one should feel entitled to paint or animate scenes of black people dying.

Seeing black flesh desecrated not only desensitizes us to the next tragedy (because in America black people are dying like clockwork), it devalues black life. That the death of Emmett Till—and countless other people killed by racist, non-black hands—are occurrences far too harrowing to be captured on a canvas. To assume that images of black people dying would evoke empathy out of anyone who saw them is inaccurate; remember that it wasn’t long ago when lynchings were placed on postcards for photographic sport. Smith sums up her essay by saying that now is the time for the resurgence of black consciousness and that black people won’t tolerate it anymore. What she fails to realize is that black people have been fighting for freedom for the last three hundred years; Smith opted to sit on the sidelines—interrogating her own blackness—instead.

Tags:"Getting In and Out", Dana Schutz, Emmett Till, Get Out, harper's magazine, Jordan Peele, Open Casket, Zadie Smith