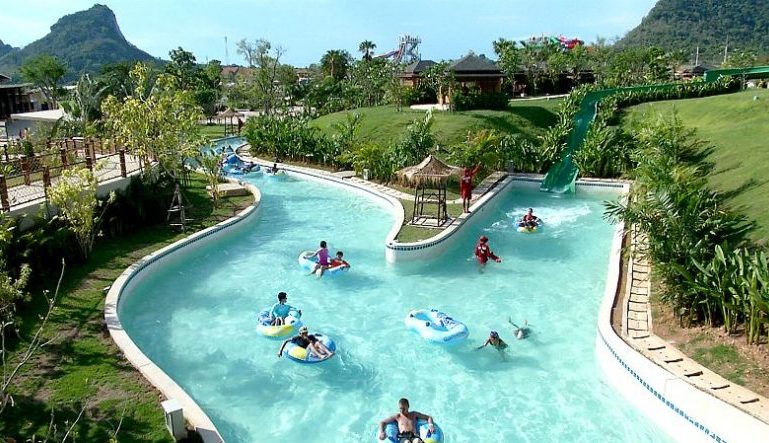 “We’re submerged, all of us.” This is how Zadie Smith begins her short story, ‘The Lazy River,’ and this is how we’re made to feel throughout it. Submerged in her words, trapped in the narrative. She brings us into her world on the page and spits us out into a reality with the realization that the one we live in is not much different from the one she’s constructed.

Smith said in an interview with The New Yorker that ‘The Lazy River,’ published last December, is meant to represent the feelings of shame and despair she felt during 2017.  I read it for the first time in the car while home for the holidays. My mom drove us through the mountains, and I read the story out loud as the pine trees flew by and small, wet snowflakes smacked the windshield. The year was coming to a close and as I read, I felt what Smith wanted me to feel: despair.

‘The Lazy River’ is a story about a group of British families on vacation at a hotel in Almería, a small town on the southern tip of Spain. The characters spend the majority of their time lounging in or around the lazy river at the hotel, which Smith explicitly from the start calls a metaphor for life. The families make just one quick trip into town while it’s being serviced, where the kids jump on trampolines and get their hair braided. At night, while the children sleep, the adults sit on their balconies and use electronic devices.

I picked up the story again recently, this time spurred by the news of Cambridge Analytica’s theft of Facebook’s user data. It’s hard to write well about technology, but Smith includes iPhones and social media in her story and I wanted to see how she approached it. It was during this rereading that I realized her short story emulates the feelings that plague society as we struggle to acknowledge what social media is doing to us.

Throughout ‘The Lazy River’ Smith uses the second person and first person plural to create a community on the page, not unlike the ones we flock to online. She establishes from the beginning that we, as readers, will be a part of the narrative and complicit in the action that ensues. She continues fostering this communal feeling with the repetition of ‘we’ and ‘us’ and ‘our’, rarely separating the reader out from the pack with ‘you.’

At first, being a part of this group on vacation seems fun. Smith sets the scene at a hotel, the all-you-can-eat-and-drink kind. She places us in the lazy river, choosing a setting that’s usually associated with joy and relaxation. Who wouldn’t want to be on vacation hanging out in a lazy river? Yet, as we go, the feeling of community she creates becomes stifling and the lack of control we have as a reader leads to a feeling of despair.

It begins with her pointing out the current. We float along in it, round and round. No one can go against it even though, “a few people—less tattooed, often university educated—make a point of turning the other way, intent upon thrashing out a stroke against the current, never advancing, instead holding their place, if only for a moment, as the others float past.” Smith also hints at the natural landscape outside of the hotel that we are missing by staying inside of the Lazy River, saying, “No, we have not seen the Moorish ruins. Nor will we be travelling into those bare, arid mountains.” We are stuck inside the metaphor going round and round, missing the beauty of the world outside. It reminds me of the way we can lose hours of our time on Instagram or Facebook, sifting through photos, unable to pull ourselves away even though the whole world outside passes us by.

But perhaps the feeling of despair that the story creates is at its crux when Smith describes the trampolines that ‘our’ children bounce on for amusement in the single trip we make outside of the hotel. She turns the trampolines into another metaphor describing them by saying, “Life’s certainly an up-and-down, up-and-down sort of affair, although for children the downs seem to come as a surprise—almost as a delight, being so outrageous, so difficult to believe—whereas for us, sitting on the wall, clutching our tumblers, it’s the ups that have come to appear a little preposterous, hard to credit…” We, along with the rest of the group, are jaded while the children (whom we haven’t let use iPhones and from whom we will try and hide their existence until at least age twelve) haven’t lost their innocence yet. It’s as if the cycle we are stuck within is weighing us down, making us depressed and anxious. We are beaten down by the current of the social networks we’re addicted to.

Yet this hopelessness we feel reading the story doesn’t stand alone. It’s intertwined with shame. Slowly, the fun of being part of this group, the vacation, the lazy river… all of it is contorted into a feeling that makes you sick to your stomach. The shame first sneaks its way into the story when our lovely lazy river is tainted with urine. Smith says, “it is not the urine that we find so disturbing. No, the sad consequence of the green is that it concentrates the mind in a very unpleasant way upon the fundamental artificiality of the Lazy River.” Our ignorance is revealed. It’s an awakening of sorts and Smith compares it to the biblical story of the Fall of Adam and Eve. The wool covering our eyes has been pulled back and the underbelly revealed, yet we will inevitably continue to jump back in anyway. Just like we inevitably end up back on Facebook even after Cambridge Analytica revealed how much of our data was being used to manipulate us.

However, Smith doesn’t just bring to life feelings of despair and shame surrounding social media with her piece. She also weaves aspects of technology and social media into the writing. For example, the scene that made me return to the story in the first place was of two sisters taking photos of each other. She uses them as a contrast to the rest of us. Smith describes their every move and points out “this business of photographs is a form of labor that fills each day to its limit, just as the Lazy River fills ours. It is an accounting of life that takes as long as life itself.” She ironically elevates the sisters, even though in our society today they’re the ones generally made fun of. People roll their eyes at others taking photos of their food or waiting in line for the perfect shot next to graffiti art. We roll our eyes at these actions and then we get caught doing them ourselves. By bringing these girls into the story, she makes us feel even lower. Smith argues, “No one is paying them for their labor, yet this does not deter them… At least they are making a project of their lives, a measurable project that can be liked or commented upon. What are we doing? Floating?” At least the sisters are taking the technology and using it rather than being used by it. They are active in the current society, we are just being pushed around by it, letting it take its course.

Smith writes us into the community in the story and we become stuck there. She hides nothing, telling us the river is a metaphor from the beginning, even calling it a “Facebook blue” at the end. It’s this act of laying things out in the open that brings out the feelings of despair and shame the most. We’re stuck in the current of social media even though we know that the networks were designed with this goal in mind. Yet, we can’t stop using them. Because just like the Lazy River, even though we see the artificiality and the residue of scum, we always choose to get back in anyway.