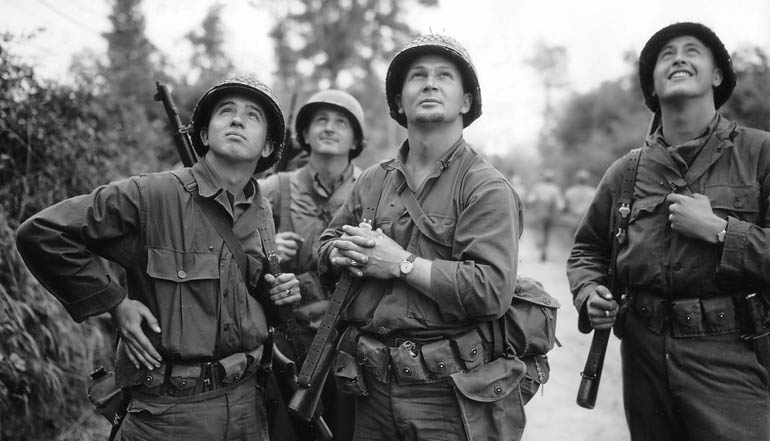 Just a perfect day,
problems all left alone,
weekenders on our own
it’s such fun.

Easter Sunday, 1953, is a perfect day for a parade. The early April sun shines from the uninterrupted pristine blue of the sky, its rays shielded by the thousands of festive holiday hats bobbing up and down Fifth Avenue; the slight nip to the air provides a handy excuse for the Manhattan fashionable to don the latest fur stoles and scarves. By noon, the crowd swells to 1,250,000. The parade marks a return to dignity, following last year’s processional, which was besmirched by a wet blanket of cold rain and “the antics of self-seeking exhibitionists and publicists.”

Among the revelers, a “small, golden-haired” boy tearfully tugs on the sleeve of a policeman in Times Square. He’s lost his mother, whom he describes as wearing a rose and pink dress. Seconds later, the frantic mother appears and smothers her boy in kisses. The officer notes her attire with a shake of his head: an orchid pinned to a navy blue suit.

The next morning, Monday, April 6th, J.D. Salinger’s Nine Stories is published by Crown. The collection, with its wry and spiritually wounded characters, immediately garners Salinger praise and solidifies his reputation (after 1951’s The Catcher in the Rye) as an important voice in American fiction. In her review for the New York Times, the writer Eudora Welty raves: “What this reader loves about Mr. Salinger’s stories is that they honor what is unique and precious in each person on earth. Their author has the courage—it is more like the earned right and privilege—to experiment at the risk of not being understood. Best of all, he has a loving heart.”

Elsewhere in New York, a drive is on to raise money for a state of the art aquarium on Coney Island. The would-be aquarist dreams of the exotic fish that might soon make their home on the Brooklyn shore: the Blind Brotulid, which “needs no eyes, so has none”; the Stonefish, which is “probably the most poisonous fish on earth”; the Upside-down Catfish, which swims upside-down; the Banana-eating Catfish, which likes to eat bananas. An ad in the newspaper urges readers to donate what they can. Four years later, the New York Aquarium opens its doors.

“This is a perfect day for bananafish,” thirty-something Seymour Glass declares to his new friend, Sybil Carpenter, in the collection’s most anthologized story. Their conversation weaves from the tragic habits of the bananafish to the pleasures of chewing on candles, the wrongness of poking a dog with a stick, and just how much Seymour likes Sybil’s blue bathing suit. “This is a yellow,” the golden-haired little girl corrects him.

Seymour is the oldest of the seven Glass children, whose lives and histories are chronicled in stories like “A Perfect Day for Bananafish,” “Uncle Wiggily in Connecticut,” and “Down at the Dinghy.” The Glass children, raised by their vaudeville-performing parents, are all gifted and remarkable in some way, having each appeared in a radio quiz show called “It’s a Wise Child.” They are wonder kids, possessing maturity well beyond their years.

In the same week that Nine Stories hits the shelves, the Ringling Brothers and Barnum & Bailey Circus visits Madison Square Garden. Audiences are dazzled as a Norwegian man juggles his children with his feet, a troupe of women pirouette on roller skates, and a family of elephants parade in descending size, the smallest no larger than a “fat pony.” The most hyped attraction is the five year-old Mister Mistin Jr., the “Child Wonder of the World,” a golden-haired miniature man in a billowing silk shirt who furiously hammers out a Romantic-period operetta on a spotlighted xylophone. Not everyone is impressed, however, as a dissatisfied spectator grumbles, “I thought at least the kid would have played that thing standing on his head.”

The harsh realities of adulthood are harder to navigate for the Glass kids than their precocious childhoods. Seymour, like Salinger himself, serves in World War II, and the stresses of battle take their toll. Seymour distances himself from his family. He calls his wife unkind names. He accuses strangers of staring at his feet

All across the United States, veterans struggle with anxiety, depression, and a host of other maladies related to post-traumatic stress disorder, though that particular term won’t be coined for another several decades. At the time, they are merely dealing with bouts of “battle exhaustion.” A month after Nine Stories comes out, a 28 year-old WWII veteran who has been in and out of hospitals since the war leaps from the Queensboro Bridge.

But there is hope, insists a psychologist from the University of Cincinnati. He cites the example of a family friend who returned from war a changed man: “He wrestled for a year with his problems. His family was puzzled and sad, but let him alone. And the veteran? He sat in the rocker in the living room or on the porch, and he rocked for a year. Then he snapped out of it, went to work, and married happily.”

Though not all of Salinger’s stories point to such optimism, Sergeant X from “For Esme—With Love and Squalor” is buoyed by an unexpected letter from a young acquaintance. The message, like some bright dispatch from a distant, better world, causes X to be washed over with an almost miraculous sleepiness. For the first time, he glimpses a way forward: “You take a really sleepy man, Esme, and he always stands a chance of again becoming a man with all his fac—with all his f-a-c-u-l-t-i-e-s intact.”