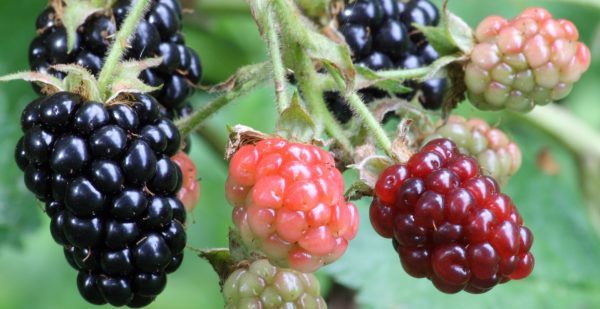 In “Trances of the Blast,” the poem from the book by the same name, Mary Ruefle begins with a question and answer: “What is the code for happiness?/Blackberries forever.”

Although the book—Trances of the Blast—came out several years ago, this particular line has haunted me ever since, not only because it’s surprising, but because of how well it illustrates one of poetry’s chief pleasures for me.

The study of poetry is often treated in school as if it’s a cryptography exercise, because symbolism is an important literary concept, and because symbols of larger abstract concepts are one of the more obvious ways literature conveys deeper meaning and develops through history. But the blackberry—unlike the white dove or the red rose—isn’t a universal symbol. So if “Blackberries forever” is code for happiness, it’s also evocative of a number of other poems that use blackberry imagery—Whitman’s blackberry adorning “the parlors of heaven” as one of life’s many simple but revelatory pleasures, Plath’s “Nobody in the lane, and nothing, nothing but blackberries,” or Hass “saying blackberry, blackberry, blackberry,” in his lovely “Meditation at Lagunitas,” to name a few. As an image in poetry, the blackberry is a familiar one, but it has so far evaded being associated too firmly with any single poem or poet.

What interests me, then, is how individual words in a poem—like “blackberry”—trigger other poems, how when we attune ourselves to this kind of reading, the words ghost back to earlier ones, so that we feel their echoes surrounding and informing the new one, the brain behaving like the Oxford English Dictionary as it traces an image back to its earlier usages.

This is distinct from the ghosting that happens when a poem uses diction to pull us into pop culture. Frank O’Hara is a master of that; he’s king of the contemporary name-check. He gave us Lana Turner, Rachmaninoff, Kenneth Koch, and Ginger Rogers in Lunch Poems, and Mae West and Clark Gable and Harpo Marx and Elizabeth Taylor in Meditations In An Emergency. Through naming specific people and things, he conjured a specific place and time, delivered through an O’Hara-specific tonal lens.

But if symbols enrich a poem by drawing in larger abstractions, pop cultural references do the opposite: they tighten the focus to a specific time and place. Neither of these explains the blackberry, however, which is neither a fixed symbol nor a pop-cultural tag. It doesn’t stand in for a larger abstract concept, or encapsulate a specific time and place. Instead, it simply reverberates back to earlier blackberry poems. Is this an intentional effect Ruefle is working toward? Or is it simply the effect that reading so much poetry over the years has had on my brain, making me see poems within poems, poems within words?

From a linguist’s perspective, images in a poem “prime” us—an evocative word prods the highly suggestible brain into calling forth all of the others it corresponds with. How English Works, an authoritative text on the subject, describes how the brain sorts words as a web. Authors Curzan and Adams explain that “when we see or hear a word, we activate the web of relationships around it—its homonyms, synonyms, collocates, and rhymes […] hearing a word activates all possibilities.” Poetry primes the brain to draw connections everywhere.

Onto pleasure, then—studies using MRIs have confirmed what everyone who loves poetry already knows: that it arouses the same right side parts of the brain that respond emotionally to music.  And so, encountering the word “bough” in a poem will remind readers of Pound’s “petals on a wet bough,” a reader who encounters the word “Daddy” in a contemporary poem may be reminded of Plath’s earlier one by that name, and I find myself whispering questions about happiness to Whitman’s ghost.

Poetry makes readers acutely aware of relationships between words, so that the more we read, the more we become primed for double entendre: in syntax, line breaks, and individual words. And that recognition, that idiosyncratic “decoding” of the poem beyond obvious symbols and overt meaning, is such a pleasure.

If blackberries are both an image and an evocation of a web of other blackberry poems, and poetry is processed in the brain as a pleasure akin to music, then Ruefle is right after all: blackberries forever is code for happiness.