Home
»
Uncategorized
»
How Can We Feed Our Creativity?

For songwriter Vienna Teng, the secret seems to lie in her variety of influences.

While I combed through your fabulous feedback (!) on What Poetry Can Learn from Pop Music last month, I connected with Teng for my ongoing interview series,  “Hey Guys, Other People Read Too!“

Haven’t heard her? Check out this choral-like demo, written from the POV of a marketing database, inspired in part by Nate Silver‘s blog. It’s “sacred music for the age of Big Data.” Click play & come back…(I’ll wait.)

Last month, having just completed a MBA in Global Sustainable Enterprise (what the?!), Vienna launched right into recording a new album. She took a break from lyric-writing to offer her insights on the creative process, productive influences, and more.

“I’m always aiming for that state of blissful experimentation.” 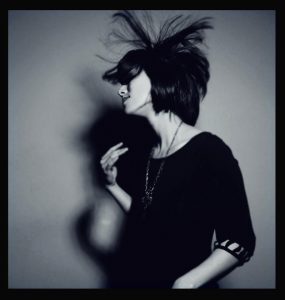 So: The beginning. What first motivated you to create, write, sing?

I think it was sheer primate curiosity, a natural progression from imitating adults. I made up nursery rhymes in Chinese-English creole. I started piano lessons when I was five, and at six I was composing little pieces of my own. Creating was just play: I bet I can do that. I wonder what happens when you do this. 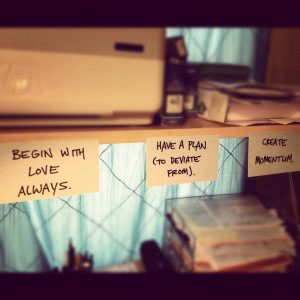 A few of Vienna’s songwriting reminders

In my best moments now, that’s still how it feels. I’m always aiming for that state of blissful experimentation.

What was the first literature that had a profound impact on you?

Leo Lionni’s Frederick. My parents would read it to me when I was about three years old. I loved how this mouse would gather sun rays and colors to conjure up later through words. (I also remember deciding one day that it was a coloring book, so my family’s copy has a lot of green scribbles in it.)

When I crossed paths again with Frederick a few years ago, I was in my early 30s and questioning the legitimacy of my creative life, so I had a totally different reading of the story. How does the little twerp get away with not contributing to the food supply? Why does he wait until everyone’s cold and miserable and nagging him to share whatever he’s been up to? Who does he think he is? 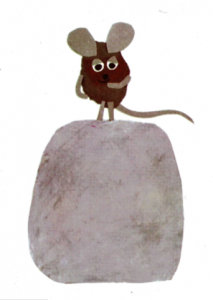 Whose side did you take, in the end?

The jury’s still out. I recently started a second career, so apparently I think Frederick should be gathering grain as well as colors… But when the other mice tell him he’s a poet and he blushes, takes a bow, and says “I know it”—I’m trying to do that too. Trying to own my vocation as an artist.

Whose work has recently fed your creativity?

Michael Pollan. I’ve changed how I think about my relationship to food because of his writing. And it’s not because he guilt-tripped or shocked me into it—he made me fall in love. His is journalism of the highest order: well researched, thoughtfully explored, distilled into great storytelling (the corn plant domesticated us?) and pithy insights (“Eat food. Not too much. Mostly plants”).

“I spend a lot of time thinking about what the song equivalent of a Michael Pollan article would be.”

His writing has a translucent quality—I feel like I’m effortlessly absorbing new knowledge—but it’s beautifully personal, too. The passages where he waxes rhapsodic about cooking or gardening are some of the loveliest bits of prose I’ve read.

I spend a lot of time thinking about what the song equivalent of a Michael Pollan article would be, or the album equivalent of The Omnivore’s Dilemma. I’m not convinced that music works for spurring the kind of public awakening that he spurs through nonfiction. But if there’s a way to do it well, that’s the kind of music I’d like to make.

Is there a non-poet whose work you’d describe as poetic?
And what writers have influenced your own work?

My two biggest musical influences are probably Paul Simon and Tori Amos. Paul Simon is reflective, observational, full of warm-hearted wit, adventuresome but always even-keeled. Then you have Tori Amos, all dark mythology and swollen emotion, who summons all this primal energy out of her instruments. They’re both virtuosic, both deeply intelligent, but they channel their gifts differently.

Then I thought about the two poets I keep re-reading over time, Billy Collins and Anne Sexton, and realized you could describe their respective poetry much the same way. Billy Collins’s The Best Cigarette feels related to Paul Simon’s So Beautiful or So What. And Tori Amos’s Night of Hunters seems kin to Anne Sexton’s Transformations. Together they map out the territory of what I might be capable of doing.

In what ways does what you’re reading at any given time influence your own creative process?

Songwriting is a nonlinear process for me—I never know where that jolt comes from, why certain ideas spark off other ideas; it’s all trial and error. Sometimes something I’ve read will react with a piece of music, or a certain phrase will sneak into a lyric… 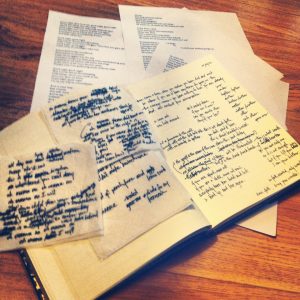 Some lyrics for the upcoming record… Works in progress

For example: a few months ago I was puzzling over two fragments: a Radiohead-like chord progression, equal parts sensual and ominous, and a vague desire to write about the body. Then I happened to read an article about Body Identity Integrity Disorder (BIID), a condition where otherwise healthy people feel a need to have one of their limbs amputated. It’s a beautifully written piece on an unsettling topic, and it unlocked the song for me.

“morality gets tricky on the frontiers of anything.”

The lyrics didn’t end up being strictly about BIID—it’s a useful metaphor for other forms of alienation and defiance, our malleable sense of self vs. other (and normal vs. perverse), and how morality gets tricky on the frontiers of anything.

Why do you think so few people read poetry in our culture?

I think most of us (myself included) find written poetry intimidating. It’s like chamber music, or ballet—we know it’s deep, it’s this art form that requires great precision and heart and insight, and we’re embarrassed that we don’t quite get it. What does it mean? What am I supposed to be appreciating here?…You have to summon all the sounds from your own head: vowels and consonants, tempo, dialect. It’s concentrated monomedia.

But I don’t think it has to be an elitist art form. A little hand-holding goes a long way. I bought a collection of Samuel Menashe poems once because 1) it was the first volume in The Poetry Foundation’s Neglected Masters series, which was an intriguing endorsement, and 2) Christopher Ricks’s introduction really helped unpack the magic for me. Who knew you could relish poetry not just by the word or the syllable, but by the letter?

Do you think poetry should play more of a role in society?

It’s already well woven into our culture, if we take an expansive view of the term.

“Poetry is a big family; the stuff that appears in literary reviews is just one branch of the tree.”

We memorize rap lyrics (Jay-Z’s Decoded is a great book of annotated verse, and it turned me on to a lot of hip-hop that was too opaque to me before). We go to poetry slams, standup comedy, live radio shows, acoustic songwriter concerts, impassioned Sunday sermons. We respond viscerally when we hear cadenced language that reflects some truth in our hearts.

And the written word still does get around some. People share poems with each other to mark occasions, to give guidance, to offer comfort. Poetry is a big family; the stuff that appears in literary reviews is just one branch of the tree.

You just completed a degree in sustainable enterprise—Do the SE and music worlds intersect for you?

These are mostly separate threads of my life right now, but they do bump up against each other occasionally. I performed at a cleantech investor conference because the chairman is a fan, and got to meet some luminaries of the environmental movement there.

“I could either despair, or get up and dance. And I’d rather dance.”

Also, these new songs definitely have a different tone from what I’ve written in the past. They’re more energetic, joyful, even when they’re about difficult or confusing things. That was my response to all the disturbing information I learned in school: I could either despair at the fate of the world, at the futility of trying to create meaningful change, or I could get up and dance. And I’d rather dance.