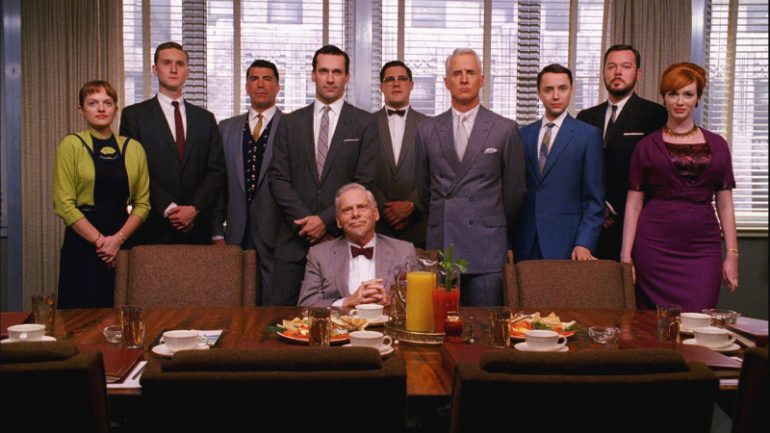 Tonight the seventh and final season of “Mad Men” premieres on AMC. I’ve loved this show and the slow, magnetic swirl of 1960s Manhattan ever since the episode “Babylon” aired in 2007. The entire series might be considered in terms of the opening credits we’ve all grown familiar with: a man in a suit-silhouette of black and white falls through the sky against a backdrop of skyscrapers and advertising billboards.

Week after week, “Mad Men” sifts through the detritus of a life spent in advertising—the ghostly cigarettes, empty decanters, door-jamb nooses, and the insistent chatter of a typewriter that soothes a desperate heart. And though most writers will never be flown west to meet with Sunkist or to broker a deal for a television spot, I still find many parallels between literature and advertising, two artistic endeavors in which creative work sometimes turns a profit. So what might writers learn from this show, its characters, and its creator?

Brilliance Works on a Deadline

When my Rutgers undergraduate students used to gripe about having a paper due each week, I would tell them that deadlines were their friends. It became a running joke, and I didn’t mind. I wanted to challenge them to rethink their assumptions. I wanted my students to adjust their relationship with the work I asked of them. I wanted them to see deadlines not as an adversary, but a driver of their best writing.

As you might expect, my attempts had mixed success; some students improved, some plateaued, and others backslid. Many of them disliked writing as much on the last day of class as they did on the first. In time I realized it didn’t truly matter whether they liked to write or not. I had overlooked the fact that sometimes we need an adversary more than we need a friend.

A better maxim can be found in what Roger Sterling told his crew when they joined the last-minute battle for the lucrative Chevrolet advertising account:

“We’re not afraid of a deadline.”

Writers, what if this became true of us? Friend or foe, a deadline can push us to transform artistic potential into a finished product. All we need to do is step up to the challenge.

On the other hand, let’s be honest—many writers don’t have the luxury of being assigned a deadline. Many of us are working on projects wholly new and unseen, and as it stands, no one else in the world cares if we ever finish. We shoulder the dream, the work, and the fear that the dream may never come to fruition. I wonder if “Mad Men” creator Matthew Weiner felt a similar pressure in 2000 as he penned the pilot for what would become AMC’s first feature television series.

At the time, Weiner made his living by writing for another show. In 2002, an HBO executive read the pilot and was impressed, but he hired Weiner to write for “The Sopranos” instead of giving “Mad Men” the green light. Finally in 2007—after both HBO and Showtime passed on the series and seven years after he wrote the original episode—“Mad Men” aired on AMC. It must have felt like a gamble for Weiner at the time to sign on with a network only known for televising movie classics, and yet now we know AMC as the home for other popular series like “Breaking Bad” and “The Walking Dead.” “Mad Men,” an innovative show on an untested network, paved the way for other great works of art to follow.

The parallel between this story and the struggle of so many authors almost writes itself. The path to publication is never a straight line. It can take years to find an agent in addition to the years it takes to write a book. All the big presses might pass on your novel only for a small press to fall in love and promote the hell out of it. An author might write a whole drawer-full of manuscripts before finally selling one. If this sounds familiar, take heart in Matthew Weiner’s anything-but-overnight success.

As much as “Mad Men” focuses on the simultaneous demise and triumph of Don Draper, it also centers on the rise of secretary-turned-creative-copywriter Peggy Olson. From the moment she spied a “basket of kisses” for the Belle Jolie lipstick campaign, Peggy has proven to her male counterparts that her imagination is just as sophisticated and clever as theirs. Don wasn’t being charitable when he hired her as the firm’s first female copywriter. He was being smart.

Together Don and Peggy form one of television’s strongest platonic pairs because their relationship never becomes static. Over the course of the series, Peggy has developed her own point of view, her own goals, and her own career influenced by (but not beholden to) her boss.

The Peggy Principle can be captured in three simple words: outgrow your mentors. I find this idea largely missing from the debate over whether an MFA degree is worth the time and money. Whether or not you get an MFA is less important to the health of your writing career than what you do after you receive your diploma. Studying under a famous writer won’t help you finish your book. You will help you finish your book. We ought to always be students, yes—but students of our craft rather than our teachers.

At his worst, Don Draper is a troubled, sometimes brilliant narcissist with a cigarette in one hand and an old-fashioned in the other. At his best, Don is an adversarial muse that pulls the best work out of himself and his employees. As often as he destroys the women he falls in love with, he also creates an electric work environment that sparks his employees’ creativity—even as they despise him.

The artistic muse is not our friend. It won’t pick us up when we’re down. It will treat us unfairly. It will ask for more than we have to give. And every time we think we’ve had enough, the impossible occurs. An idea appears in the emptiness—something we couldn’t pull off on our own, like falling in love or having an argument. And just like that we’re back in the muse’s thrall, vision and clarity within arm’s reach.

The creative process is as much about struggle as it is about resolution, as much about wandering as finding our way. The characters living in the “Mad Men” world are all in search of their own frontiers—not the ones found in far-off lands—but the ones that exist in the mind and the heart. Don Draper, with all his faults and misplaced desires, has taught me that both friction and longing play essential parts in the act of creation.

In an episode from Season Six when Don’s personal troubles and professional battles both reach a fever pitch, he has this to say about his life’s work:

I keep thinking about the basic principle of advertising. There’s entertainment and then you stick the ad in the middle of the entertainment like a little respite. It’s a bargain. They’re getting the entertainment for free, all they have to do is listen to the message.

Advertising is entertainment that aims to get us to feel a particular emotion, to consume a particular product, to believe a particular idea. The same might be said for literature, and this raises a question I think all artists have to stare down. Does our work illumine or deceive?

Perhaps this isn’t a question for artists to answer, but a tension for us to hold. The two choices dovetail and intertwine so masterfully throughout the past six seasons of “Mad Men” that we find the question itself reveals more than the answer.

Don is a man of apparent opposites. Husband and adulterer, father and child, genius and mad man. As we head into the final season, Don is fully aware of how swiftly he’s drowning in his own deception. The question still remains whether he’ll turn out to be savior or executioner.