In my previous post, I suggested the possibility of creating an olfactory map of your neighborhood. I want to pursue this thought some more, because the sense of smell is somewhat neglected in creative writing. Of course, attending to all the senses is a basic, crucial element in any good poem or story. But we tend to focus more on sight and sound.

And, since film and television have pretty much gotten the audio-visual down, I declare smell as one of the more important senses, not just for differentiating writing from film, but for its important connection with memory, emotion, and the inexplicable—not to mention its usefulness for characterization, scene-setting, and atmosphere. (As far as I know, few filmmakers other than John Waters have attempted to infuse scents into their films, and anyway, who wants to be surprised by the scratch-n-sniff card’s smell of—spoiler alert—vomit? Well, probably someone.) 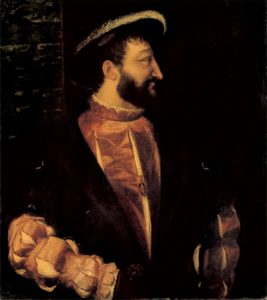 Francis I of France was apparently also known as Big Nose Francis. Portrait by Titian.

In Mavis Gallant’s short story “Lena,” the narrator Edouard describes a memory of driving to lunch with his first wife, Magdalena, who refuses to grant him a divorce, and his second wife-to-be, Juliette. Scents characterize both women and also hint at Edouard’s mixed feelings and murky memory:  “I drove, I think, grimly. Magdalena was beside me, in a nimbus of scent—jasmine, or gardenia—that made me think of the opulent, profiteering side of wars. Juliette sat behind, a road map on her knee, her finger on the western outskirts of Fontainebleau [….] It is safe to say that she smelled of soap and lemons.”

Smell need not always be pleasant. Jennifer Haigh’s story “Sublimation,” in this spring’s issue of Ploughshares, flaunts a particularly disagreeable constellation of stenches: “The afternoon was unseasonably hot, the air heavy with summer smells: ripe trash, melting tar, the harbor simmering like a stew of spoiled fish.”

If you want to go beyond the well-placed olfactory detail and get deep into scent, Patrick Suskind’s novel Perfume follows an eighteenth century perfume apprentice-cum-serial–killer seeking “the perfect scent.” And, from a very different angle, Alyssa Harad’s memoir Coming to My Senses traverses the “seductive underworld” of perfume from the launchpad of planning her wedding. Also of note is the blog Nosy Girl, which explores smell and includes interviews with writers about what they smell like and what they like to smell.

Below are some ways you might explore the sense of smell in your writing.

1. Describe smells you have strong, immediate associations with (and why); describe the most beautiful aroma, the most repellent stench. Perhaps the writing will spill over into a description of visceral reactions. Go there.

2. While revising, consider: would a smell or group of smells amplify what is going on with your characters in a particular scene? Might a particular scent throughout a story or novel lend emotional cohesion to the work as a whole?

3. Expand your sense of smell, part one: sit down with your spice rack. Have a whiff of an herb or spice. What does it make you think about it? Write and repeat. Of course, feel free to wander from smell to taste while you’re at it.

4. Expand your sense of smell, part two: get thee to a garden. Personally, I like going to places like the Washington Arboretum , where things are labeled, so I know what I’m smelling. Don’t just smell the flowers—smell the trees, the shrubs. Hell, smell the grass too.

5. Expand your sense of smell, part three: I never find myself at the perfume counter at department stores, but while we’re on the topic, I might as well expand my own horizons. Harad’s blog has some useful advice about trying perfume: if you like it, put it on; if you’re not sure, put it on; if you hate it, put it on. Apparently, perfume on skin is very different from perfume on paper.  I’m sure there is a story buried in that fact, waiting for someone to write it.

6. Expand your sense of smell, part four: Wine tastings and coffee cuppings might be other ways to learn more about refining your sense of smell and your ability to describe it. You don’t necessarily want your prose to sound like wine, coffee, or perfume ad copy (though maybe that would make for a dream day job for a lot of writers), but that’s what revision is for.

7. I am not going to suggest sniffing chemicals for the purposes of expanding your sense of smell. That’s dangerous. But back in the first prompt, you might have considered some already. What is your association with bleach or ammonia or Sharpie’s? The world is not all gardenias and Chanel No. 5.

Though I may start carrying a bottle of almond extract with me so I can have a sniff whenever I like.