Home
»
Uncategorized
»
For Those About To Write (We Salute You) #7: Show & Tell

For Those About To Write (We Salute You) will present a writing exercise to the Ploughshares community every few weeks. We heartily encourage everyone reading to take part!

Okay. This last exercise, Stop, Look, and Listen, was a challenge. I feel sheepish about this, but continually checking my phone has become a habit as bad—and instinctual—as biting my nails, which I’ve done for as long as I’ve had fingers. It’s not something I want to do. It is, more often than not, a physical action that happens before my brain can have a say in the matter; a nervous tic that actually makes me more anxious the more I do it.

Reaching for an ol’ notebook instead of a gadget took me back to the analog days when it was natural to jot down all the minutiae of my day-to-day, from stray observations to deep (and not-so-deep) thoughts. I liked it. It felt good to get down my own stream-of-conscious thoughts on paper, as opposed to absorbing someone else’s from online. This practice is a keeper for me. I’m going to try to keep up with this one, to retrain my reflexes to opt for pencil over touchscreen.

Next up is an observational deep dive; we’re going to spend loads of time developing a deeper relationship with an object we adore. Get ready to Show & Tell.

I’ll start by telling you a bit about a teensy wooden box that’s been carved into the shape of a cat. I discovered this at my grandparents’ house when I was little; it was sitting on a shelf that was juuust barely out of my reach. When I got my hands on it as a youngun, the sweet craftsmanship ran a far distant second, interest-wise, to the fact maybe, just maybe, there might be something neat inside. I opened it immediately and found a small bit of loose leaf, folded multiple times. Gasp! A secret! I uncrumpled the note and found a single sentence in my grandmother’s careful hand: “Don’t be so nosy!” To this day, few things have delighted me more than that exchange. 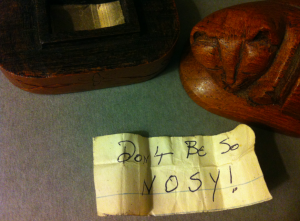 After my grandma passed away, my mom wrapped up the cat box and gave it to me for Christmas. I’ve had it on my own shelf ever since, but it wasn’t until years later, when I was feeling particularly nostalgic, that I pulled it off the shelf and discovered, *underneath* that note, a yellowed piece of newsprint. What the heck?! It was a short poem about loss and love that made me cry a heck of a lot. Plus: I had no idea when it became part of the package. Another secret. 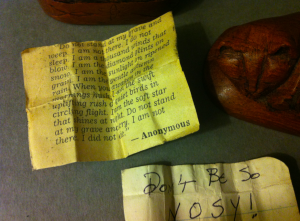 A few months ago it came up in conversation and my mom told me she had slipped it in before gifting it to me at the holidays so long ago. The mystery was solved, but it’s still fascinating to me that this object I’ve been familiar with for decades was able to reveal new information and familial insights.

Let this object be your muse for the month. Delve into its actual history: where you got it, who gave it to you, where its been with you, its appearance, its place in your home. Then let your imagination run wild. Upend everything you know about it: fabricate an elaborate or wildly mundane origin story, trace its faux journey into your possession, craft a bio for whoever owned it before you, or who made it, or who passed it by at the shop before you picked it up. Go crazy. Touch it. Ask questions, then answer them. Do research.

Try for six sessions sitting with your chosen token, at ten minutes a pop. That’s a solid hour of writing taken in manageable chunks, and will offer the opportunity to explore a handful of different angles, approaches, descriptions, and backstories for your favorite thing. Just think of the myriad tales hiding beneath its paint, behind its canvas, betwtixt its stitches.

Significant Objects is the perfect complement to this exercise. Rob Walker and Joshua Glenn’s series features Ebay and thrift store-bought items that were given to writers of note to concoct a compelling, fictitious narrative. Brilliant.

And, as always, if you’re just joining us here, now’s a good time to catch up on the previous posts in the series.

Jordan Kushins is based in beautiful San Francisco, California. She's a staff writer at Gizmodo, is a former contributor at Co.Design and editor at Dwell, and received an MA in creative writing at Middlesex University in London. Check out her work at jordankushins.com.