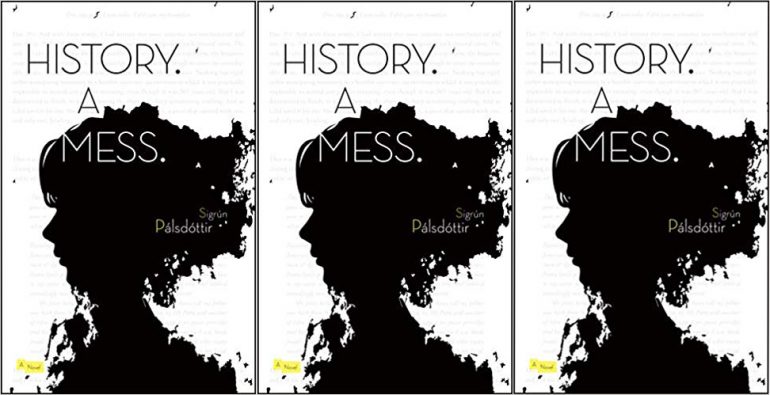 Sigrún Pálsdóttir’s new novel, History. A Mess., translated by Lytton Smith, begins with a humorous conceit: the slogwork of small-time scholars. The book’s protagonist, a young woman and painter manqué who slunk, defeated, into academia, is putting the final touches on her dissertation, which revolves around a nearly four-hundred-year-old British diary. The diary is dull and repetitious, a crushingly boring play-by-play of breakfasts eaten and laundry folded, but she keeps at her work, content, if this must be the measure of her life, to “keep scrutinizing nothing.” Salvation comes in the form of an unexpected entry that suggests the diary-keeper, known as S.B., was actually a woman, which would make her the first professional female artist in England. Suddenly, the doldrums clear, the narrator’s future irradiated by this chance discovery. Pálsdóttir’s vivid, electric descriptions of the rush of scholastic discovery are on point and captivating:

Frenzied jubilation thrilled through my body, words burst within me freighted with tremendous power, inside my head sentences and then pages formed one after the other so that by the time I stepped out of the building into the outside courtyard, my introduction was well underway.

History. A Mess. is at its best when it dwells, like this, on the felt experience of modern scholarship. The debasement of academia, its failure to live up to an ideal of pure scholasticism, haunts the text—everything feels seedy, modern, mucked up with the mechanisms of late capitalism. The narrator, crushed by the need to monetize her passion for art, takes pills for her anxiety. As she barrels into her research project, her supportive mother sends her a steady stream of books ordered from Amazon. Her sister, once an academic, now serves as a consultant for a mindfulness business.

When the narrator discovers, toward the end of her dissertation, a page in the diary that she overlooked, the book abruptly shifts its tone, donning the outlines of a psychological horror story. The overlooked page turns out to be an earth-shattering preterition, flatly disproving her thesis. Dazed and nauseated, the narrator crosses the Rubicon of scholastic honor, tearing the page out and secreting it away in her notebook. What follows is a dizzy swirl of tragedies: we learn that the narrator had a miscarriage and was insufficiently comforted by her husband, Hans; we learn that her family has always been overbearing, a psychic weight she carries with her still; we learn that she was beset by visions as a child of “miniscule creatures,” including a “little officer who guarded the toothbrush in the bathroom.”

It turns out, unsurprisingly, that the narrator’s own personal history is a mess, too. The book’s psychological exegeses become another form of scholarship, a scholasticism of the self. “My attempt had been to look at my existence as a past and try to revise it as a historical period,” the narrator explains. “I had meant to re-experience moments from the past, trying to break down their working parts and so discover each thread of the visual experience within them.” The problem with this self-centered hermeneutics is that it’s easily corrupted, becoming, as the narrator’s secret begins to fester, a wide-ranging paranoia. She begins to read too much into the trite babble of party guests and the throwaway comments of her cosmopolitan mother and imagines lengthy, accusatory conversations, held among her circle of friends, in which the subject is inevitably herself.

In a moment of mental crisis, the narrator reviews her reasons for not reaching out to Hans: “More than anything, I am afraid he’ll just take me in his arms and not ask a thing.” In the end, her harrowing thoughts boil down to this vertiginous sense of shame: she’s afraid of having her weakness reflected back at her, of being, simply, understood. Her scholarly failures, as it turns out, are only one manifestation of her personal flaws, of her penchant for “always looking at people’s appearances, gestures and hand movements while their words dissolved before me.” Obsessed with surfaces, with the accidents of physical bearing, the narrator betrays a desire to be, herself, nothing but a surface.

At her admissions interview for the Royal Art Academy, the narrator is asked why she’s captivated by landscapes and skies and responds that it’s “the fact that the subject lies always in front of our sight, real and material yet untouchable and unpredictable.” The lines take on a chilling resonance when we consider her tendency to discover, in paintings and pictures, her own face blending into the image. Staring through the windows of a framer’s shop, she spies a “turbulent landscape in a golden frame” and creeps closer to the glass: “The clouds fade and move slowly away. The colors dissolve into one another until my face lies superimposed on Turner’s sky.”

Moments like this one—chilly, bleak, and crystalline—ultimately define History. A Mess., which is at once a disturbing but riveting portrait of a glassy psyche and an enlightening critique of the constraints and pressures of modern scholarship. The book makes no claim to providing any answers but instead settles comfortably in the personal. In other words, it’s a diagnosis, not a treatment. The novel ends with the narrator’s mother—a naturally bright woman who only recently, at the age of fifty, attended college—beginning to edit the narrator’s manuscript. Having discovered the torn-out page, she pores over it and finds that rather than invalidating her daughter’s thesis, it actually amplifies it. It’s a vaguely medieval set-up, this monkish praxis, in which texts are inherited and edited, addendums made, a tireless sprucing-up taking place in obscurity. And perhaps, too, it’s a reminder that often, in the long chain of scholarship, it’s the minor egos that survive.