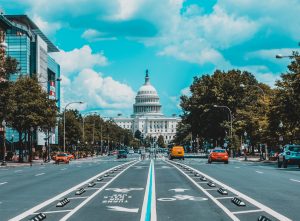 Washington, DC has become well known for its literary culture, spanning independent bookstores, events, and small presses. Reading series and open mic nights around the city bring the creative-minded together to share their love of language. Each month, 826DC, a local branch of the student literacy nonprofit co-founded by author Dave Eggers, hosts the lowercase reading series, while the DC café chain Busboys and Poets is home to a range of popular poetry slams, including Sparkle, a “a queer-friendly and focused reading series.”

Among the homegrown events regularly packing the literary-minded into bars in Washington’s hippest neighborhoods, is The Inner Loop, a reading series created by local residents Rachel Coonce and Courtney Sexton. Both graduates of the Sarah Lawrence College MFA program, Coonce and Sexton wrote in a joint email that the series is “driven by a love of writing, by the joy of hearing people read their work aloud, and by a desire to connect writers with their community.” They say that they “feel that the act of reading aloud transforms the written word into a communal event, bringing the writer and the audience together in a way that is entirely different from reading on the page.”

Since 2014, Coonce and Sexton have hosted the series, which is named for the ribbon of highway that encircles the nation’s capital, on a monthly basis. Free and open to the public since the beginning, the first-ever reading drew 75 people. Coonce and Sexton say “the energy, the people, the excitement and the support was palpable” on that first night, and they “knew right then that we had hit on something.”

Each reading of The Inner Loop features both emerging and established writers. Those who are more advanced in their literary careers anchor each event, and have included the likes of New York Times bestsellers Carolyn Parkhurst and Dolen Perkins-Valdez, as well as poet James Arthur, a Stegner fellow and Fulbright scholar who has published in the New Yorker and elsewhere.

Alongside these literary successes, up to nine emerging writers each month, chosen by Coonce and Sexton from open submissions, have a chance to build their audience. Local author Tara Campbell began sharing her work at The Inner Loop in 2015. The following year, the DC Commission on the Arts and Humanities presented Campbell with the 31st Annual Mayor’s Arts Award for Outstanding New Artist and she published her first novel, TreeVolution, with Lillicat Publishers. Melissa Scholes Young, who writes from Washington and teaches at American University, gave her first reading at The Inner Loop in 2014, and in 2017 published her debut novel, Flood, with Center Street/Hatchette. Poet Nicole Tong took The Inner Loop podium in 2015, and her debut collection, How to Prove a Theory, earned the Jean Feldman Poetry Prize in 2017 and, soon after, publication from the Washington Writers’ Publishing House.

As they hosted the monthly reading series, Coonce and Sexton say, they saw growth potential, and slowly began offering new literary opportunities to local writers. Today, they host biannual writing retreats, a podcast called The Inner Loop Radio featuring clips from the reading series and bonus interviews with authors, a summer residency at a Frank Lloyd Wright property in suburban Washington and more. “When we began, we couldn’t have anticipated that we’d be providing all of these opportunities, but it happened organically,” Coonce and Sexton say. “We follow our gut and respond to the community, and beautiful things grow from it.”

Running the range of programming offered under The Inner Loop umbrella as unpaid volunteers is no small feat, and Coonce and Sexton spend what they call “a lot of woman hours” building their community and organizing events. They are currently in the process of converting The Inner Loop into a 501(c)(3) nonprofit, which will make their organization eligible for grants and other funding opportunities, which they plan to use to expand programming even further.

Coonce and Sexton say that, for them, “all of the work is worth it […] for as long as we can be an asset to the city, we’ll keep doing what we do, because we get back tenfold what we give, in inspiration and in community.”