The Literary Boroughs series will explore little-known and well-known literary communities across the country and world and show that while literary culture can exist online without regard to geographic location, it also continues to thrive locally. Posts are by no means exhaustive. The series originally ran on our blog from May 2012 until April 2013. Please enjoy the 57th post on Riverside, California, by Sari Fordham. 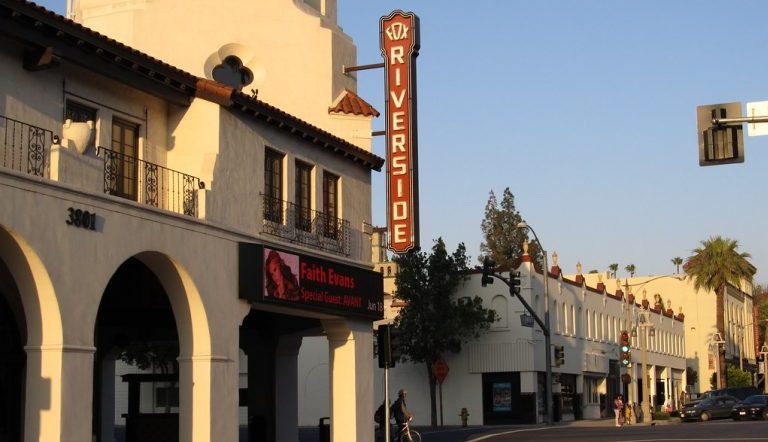 On the busy corner of Magnolia and Arlington Ave. grows a Washington navel orange tree. It would look like any other citrus tree if it weren’t surrounded by a wrought iron fence and marked with a historical placard. The tree, you learn from reading the placard, was planted in 1873 and is one of two Washington navel trees that began California’s orange industry.

Riverside, an offbeat literary community, started as a citrus town and is now home to University of California, Riverside (UCR); La Sierra University; California Baptist University; Riverside City College; and Riverside Community College. In the winter, you can bike along the Santa Ana River trail in your shorts and t-shirt, gazing up at the snowcapped San Bernardino Mountains. The city is famously one hour away from the beach, desert, and ski slopes and boasts 277 sunny days a year. Despite all this beautiful weather, you’ll find a largely working-class community committed to both writing and reading.

Resident writers:
NPR recently did a piece on resident writer (and UCR faculty member) Susan Straight and how, like William Faulkner and Thomas Wolfe, her fiction is grounded in her hometown. Other distinguished resident writers include novelist Goldberry Long and novelist and activist Gayle Brandeis.

Literary references:
Novelist Susan Straight sets most of her novels in Rio Secco, a thinly veiled version of Riverside. Rin Tin Tin by Susan Orlean is partially set in Riverside, and Joan Didion’s essay “Some Dreamers of the Golden Dream” is about the Inland Empire, of which Riverside is a part.

Where to learn:
University of California, Riverside offers an MFA in Creative Writing and Writing for the Preforming Arts. This excellent MFA program is renowned for its diversity and its commitment to cross-genre learning. While students specialize in one of five genres (poetry, fiction, nonfiction, playwriting, or screenwriting), studying other genres is encouraged by the faculty. It’s not unusual for a nonfiction writer to see her play produced or for a screenwriter to complete a novel manuscript. UCR also offers an undergraduate degree in creative writing.

Inlandia Institute, based in Riverside, nurtures creative writing throughout the Inland Empire. The institute sponsors readings, promotes literacy in schools, and offers creative writing workshops for adults and teens. Workshop participants frequently submit work for the annual Writing from Inlandia anthology. Workshops are held in the Riverside Main Library every Thursday night from 7-9 p.m.

The Stay Classy Creative Writing Club was featured in a Poets & Writers blog by poet Chiwan Choi who called his visit with them his favorite literary event. They meet weekly to workshop each other’s prose and are part of Riverside City College. Their mission is to “create a community where people feel free to express themselves through written word.” They meet on the Riverside City College campus in the Quadrangle, room 212 on Tuesdays from 12:50-1:50.

Where to find reading material:
Cellar Door Books is an independent, locally run bookstore. Not only do they have a wide selection of books (over 7,000 titles), but they also host literary readings, bring authors in for signings, and provide space for book clubs and writing workshops. Cellar Door Books opened in 2012 and has quickly become a beloved Riverside shop.

An eclectic store, Renaissance Book Shop sells new and used books, with a focus on science fiction, science and economics, and philosophy. The shop also sells DVDs of European and Asian films.

The Riverside Public Library has eight branches and about 425,000 books. In addition, they offer spaces for creative writing workshops.

Where to get published:
Crate Literary Magazine is produced by students in the UCR MFA program. They accept submissions of poetry, fiction, and visual arts.

Inlandia: A Literary Journey, the online literary journal produced by the Inlandia Institute, is for writers and readers of the Inland Empire. The magazine specifically seeks pieces that are grounded in Southern California.

Where to write:
Sure, you could write at one of the many Starbucks located around the city, but with so many terrific alternatives, why would you?

Lift Coffee Roasters is one of the newest options in town. Get a cup of siphon-brewed coffee, and select one of the dark wood tables to work on. The space is as beautiful as the coffee. While Lift is new, Back to the Grind is a Riverside institution. The rambling two-story coffee shop has been the meeting place for writers for years. Literary readings are often held in the basement.

Across from Cellar Door Books, you’ll find Jammin’ Bread Café, a favorite with UCR writers. The unassuming dining spot has amazing sandwiches and lattes that arrive in large soup-bowlish mugs. On Saturday mornings, stop in for whole-wheat waffles and stay to write.

Since you’re in California, you’ll eventually want to leave the coffee shops and cafes. At Ten Ren’s Tea Time, you can order a salt and pepper tofu appetizer and a lychee green mango teazer, and take your laptop to the corner booth. As you write, pause to watch Californians walking by, texting on their smart phones.

Events/Festivals:
For thirty-seven years, UCR has celebrated prose through Writers Week. The annual event is usually held in January or February, and features nearly a dozen award winning poets, memoirists, novelists, and journalists who give lectures on the craft of writing and read from their work. The event is free and open to the public.

Begun in 1993, the Riverside Dickens Festival celebrates the author’s work with plays, street performers, food, and workshops. The festival features a different Dicken’s novel each year and is always good, kitschy fun!

Sari Fordham (@sarikarina) has an MFA in creative writing from the University of Minnesota. Her work has appeared in Brevity, Cerise Press, Pithead Chapel, and the 2011 Best of the Net Anthology. She teaches creative writing at La Sierra University.