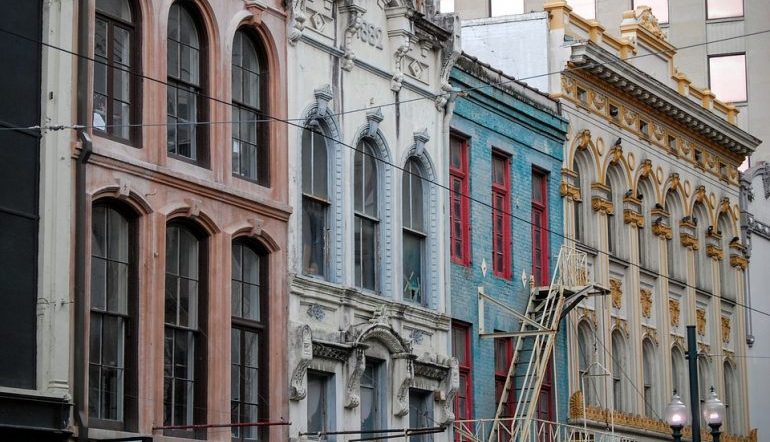 We land and see palm trees, which baffles me. It’s my first trip to New Orleans. For some reason, I hadn’t pictured palm trees. Immediately, we see houses scarred with post-Katrina markings–the number of bodies, stranded pets, when it was searched. Some are the quadrants in sticky red–orderly, informational; some are more hectic; many are glopped over with fresh paint, but still visible.
We’re staying in a Garden District guesthouse on St. Charles. The Victorian estate is sage-colored, the accents ox-blood, the low wrought-iron fence expressive, the bugs medieval. The dove-soft courtyard furniture is dappled with fallen oleander. Lizards zip by as a dragonfly visits a potted begonia. The key to what I think is a coach house reads, SLAVE QUARTERS. Later I see the same phrase in exclamatory real estate ads and realize it’s not ironic. It smells of cottage, humid and ancient-floored. The décor is mainly small paintings of plantations. Sirens and street trolleys thrum the warm air.
That night we miss Donna’s free red beans and rice at first break, but the music consoles us. A giant bassist smoking a cigarette taps his breast gently, says he’s having a little surgery, what you call it, a pacemaker or something, the next day. Be back on the gig a night or two later, he assures us. His girlfriend, Hannah, waves me to the table beside hers. “You don’t smoke, do you? All right then. Sit yourself down.” She hides the ash tray, scoots over to talk about how people ask if you mind then light up anyway and here she just had cancer. But thank God her garden is finally coming back. Getting big fat juicy berries. Been four years. First Katrina, then cancer, then rebuilding her house, and now, at last, the yard is blooming again. But the damned raccoons raid nightly. She’s tried everything. People say fox urine is best, “But how the hell I’m supposed to get pee from a fox?” she asks. “I sure like to know.” Actually, they sell it at my hardware store, I tell her. I’ll send you some. One of the perks of living in the mountains. No jazz or seafood or diversity, but we’ve got fox urine. And it works. I hand her a pen. She writes her address in exuberant script.

At Slim Goodies, we eat breakfast in the Nervous Wreck booth. The walls are quilted with Polaroids: a pooch in a pink tutu crapped out on a lawn; women in cymbal-sized earrings; a baby in a yellow dress, plump satin bow and perishable smile–the kind only a child has and only for a moment. All the booths are filled, some with slumped readers in bruised fedoras. There’s a girl with a tattooed armpit and boys who look congenitally sleepy. Our waitress says her friend’s mom was visiting from a Nebraskan farm and said, “What is that smell? I’ve been smelling that everywhere.” Oh, it’s pot, our waitress told her. Want to go smoke a bowl? So they did. “Then the mom goes back to Nebraska, right?” our gal says, stacking empty plates. “Few weeks later I get this fridge magnet in the mail: Obama saying, ‘I inhaled. That was the point.’ Y’all want more coffee?”