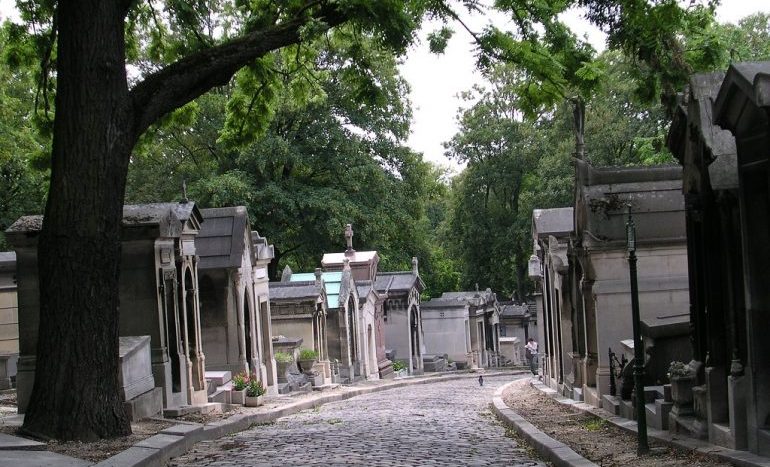 In the summer of 1991, I was twenty-two and studying literature in Boston, and considered myself a writer in training. I voraciously read works I was too young to fully absorb: Thomas Mann’s Death in Venice, Joyce’s The Dead, Tolstoy’s The Kreutzer Sonata. I couldn’t possibly have understood what longing felt like from the vantage point of a dying man or what true regret of a lost love was after a life had already been half-lived. But I loved these stories about death. I’d imagine my death sometimes, thinking of a wild car crash or a brutal murder, and was drawn to such books in an attempt to explore what death might be like.

I fell particularly hard for a novel I found in a bookstore whose location has been lost to time: The Death of a Nobody, by Jules Romains, originally published in 1911 as Mort de quelqu’un. I read the 1914 translation during that Boston summer and have since treasured it like a secret. It’s an unusual story: a lonely widower in Paris dies in the first ten pages, and the rest of the novel is spent tracing how his spirit lives on in the memories of those who knew him or of him.

Last month, after I’d told a friend to read the book, I went hunting for my copy and finally dug it out of a box of books in the basement; a few of its thin pages fell out. It seemed the right time to revisit this lost novel. I wondered how I would read it now, decades closer to the end of my life. What would I see that I hadn’t been able to then?

At twenty-two, I might have called the novel “lovely” or “charming.” Maybe even heartwarming. My memory would call up Jacques Godard’s fellow tenants in his apartment building, and how the death of this seemingly insignificant man allowed them to connect in ways they hadn’t before—how they now stopped to chat in the hallway, and how they connected over buying a wreath in his memory. I’d remember Jacques’ grieving father on his journey to Paris from the small village where his son had grown up, and would think of this scene as the dark shading of an otherwise tender, uplifting story.

I carried these thoughts with me to Paris just a few years later, when I was twenty-six and coming off a six-month work visa in London. I’d had a rough time in London. I’d dyed my hair black and told everyone I was a writer, though I worked in a coffee shop, a night school, and an import/export shoe company. By the time I had to leave the city I didn’t have much money: I’d spent it on my high rent in King’s Cross, drinks and Mod nights in Camden, and used art books from the dusty shop on the corner of Caledonian Road. It was April, and as the ground thawed from the coldest winter London had seen in ten years, a friend pitched in for a train ticket to Paris. I hoped the city would reinvigorate my low spirits, and to help make this happen, I decided to chase down some literary ghosts, to see if they had anything to say to me. I ended up at Père Lachaise one afternoon, map in hand, stumbling around its cobbled aisles, looking for Jules Romains’s grave.

As I revisited this memory, leafing through my old copy of The Death of a Nobody, I decided it could not withstand another reading, and printed out a digital edition I found online. (The book is out of print, with old copies circulating in library stacks and the digital scan of the 1914 translation on Google Books serving as the only reminders of its existence.) I set myself up at the kitchen table before my kids woke up, with the printout and a cup of coffee.

The early scenes with the tenants were at first as I remembered them. The death of Jacques Godard had rejuvenated them and given them permission to be kind to one another. They “enjoyed lingering in groups on the landings. They pounced upon this death with a joy they would not admit to.” The same joy overtakes two women who are about to purchase the wreath for Godard as they set out on their weighty mission:

They walked abreast; at the first turning they fell into step. They felt as if they were young once more, and had not been married, but were schoolgirls dancing with a hop and a skip round in a ring together.

They thought about Jacques Godard, as girls think of a boy they know, ignorantly, curiously, and with tender mockery. He reappeared, masculine, yet with an unsubstantial body and of no particular age.

But what I see now is not joy. Instead, I see a fleeting fantasy. The news of the death has catapulted the women into an illusory state of mind, which shatters as soon as they arrive at a shop:

The women stopped. Suddenly Jacques Godard became old; took on again his white hairs, and became a fine old fellow, respected for his experience and his means. They hesitated outside a shop before a display of wreaths which the shopkeeper was preparing to take in. They, too, had grown old, in a minute; they knew life, its pains and what one suffers waiting for death. Death no longer seemed to them, as to little girls, a country at the world’s end.

How could I have digested that moment when I, a twenty-two-year-old, was still very much in an illusory state of my own? The idea of becoming old and “waiting for death” was merely something to read about; I had zero intention of actually dying. I’d lost my grandmother and my great-grandmother by this point, but it was as if they had just walked offstage, into the dark wings. After my father’s mother died when I was thirteen, I remember sitting at the kitchen table with my father and he asked me, with tears in his eyes, “What do you think about death? What do you think happens?” In my cruel ignorance, I said “When you die, you die,” with a shrug of my shoulders. My shame keeps that memory sharp.

When, at twenty-two, I first read the passages related to Jacques Godard’s grieving father, I saw those darker moments as a novelistic technique to contrast with the light in the last scene of the novel, in which a young artist recalls Godard and has an epiphany that life never truly ends because the spirit transcends bodily death. But reading those passages about the father again, I felt his grief in my body, swallowed it whole. In one scene, as night falls the father is walking to the ticket office in the village to buy his passage for the coach that will take him to the train station. He’s not sure who knows that his son had died:

[T]he old man was glad to see that there was no light in the cobbler’s window, because it saved him the trouble of wondering whether there was anyone inside, and he could go on his way without turning his head or being questioned by gossips. [. . .] But in the baker’s shop there were yellow shapes made by a large oil-lamp, and the shadow of the baker standing in his doorway fell across the road.

Then the old man began to cry.

How could I know at twenty-two that a return to normalcy after you’ve lost someone is almost as terrifying as the original loss? And how could I recognize that when night falls, the dark feels like your grief enveloping you?

Five years ago, my father died on Christmas night, peacefully, from cancer. I spent the week between Christmas and New Year’s planning the memorial with my stepmother, looking through photos from the 70s and 80s, writing his obituary, and visiting family. Normal life is always suspended during that week between the holidays, but it was even more so that year. All of these busy projects helped hold my full grief at bay. It was January 2, when I had to return to work, to return to the world, that it really hit.

The simple task of turning on my computer that morning felt like I was betraying him, or worse, acting as if he hadn’t died at all. Within an hour or two, I figured out that I could treat work as the new suspended reality and tackle a list of editing tasks. I built a wall of normalcy to block out the fact of my father’s death; the only way to get things done was to imagine that he was again sipping his instant coffee and reading the Nashua Telegraph at his kitchen counter.

On my way home that day, I watched the streetlights turn on, and their keen, white light seemed only to accentuate the darkness suddenly pooling around me. The wall I’d so diligently created throughout the day dissipated.

When I reread the scene of Godard’s father walking in the village at night, with the light from the oil lamp casting a shadow of the baker in the doorway and the simple customary greeting being just too much, I understood it deeply. My empathy with the father extended, in fact, through all of the scenes with him and made my reading of the artist’s epiphany at the end that much more meaningful: To remember the dead is to keep their spirit alive. It’s such a simple truth, but I could feel its power only after losing my father.

As I walked through the Père Lachaise many years ago, I finally found Romains’s grave, back toward the main entrance. It was made of sensible granite, modest and unadorned, and crowded in among others. I remember feeling disappointed; there were no flowers, no candles. No one, in fact, seemed to be tending to the writer’s grave at all. As I stood there, I wondered if he had become an unremembered nobody. Now—from the view up here at forty-eight—I see that I was feeling bad for myself, afraid that I might, too, be forgotten.

When I think back on the young woman I was that Boston summer in 1991, swallowing up so many stories about death, I see myself as one of those women in the novel, hopping and skipping to buy a wreath for a dead man. I viewed the reality of death “ignorantly, curiously, and with tender mockery.” Such complete denial is one of the inescapable beauties about being young and healthy. Now, death is no longer a country at the world’s end, and it’s not just for literature. I feel the pains, and as a mother of two small children, I see how life will move on without me. But I’m not waiting for death yet.

Tags:Jules Romains, The Death of a Nobody

Cheryl Pappas is a writer from Boston. Her work has appeared or is forthcoming in The Bitter Oleander, Tin House, SmokeLong Quarterly, Cleaver, and Essay Daily. She is currently at work on a short story collection. She holds an MFA in Fiction from Bennington Writing Seminars. You can find her at cherylpappas.net and @fabulistpappas.