Home
»
Book Reviews
»
Fiction
»
Review: THE VERSIONS OF US by Laura Barnett 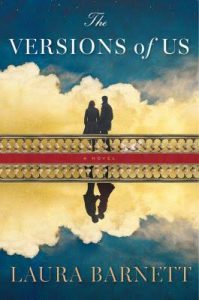 The Versions of Us, Laura Barnett’s tapestry romance, is in many ways Margaret Atwood’s “Happy Endings” fleshed into a full-novel. The novel’s main style device employs just what the title promises: three versions of the same pair, Eva and Jim, within in three variations of how their lives might play out. Although the concept of alternative realities is not new (see The French Lieutenant’s Woman and Sliding Doors), it serves Barnett’s narrative well, particularly in light of well-developed central characters.

The novel begins with the birth of Eva and Jim, singular events for which no alternatives exist. From there, Barnett lays out the text like a scrapbook with snapshot scenes over sixty years from three possible versions: one where Eva and Jim meet in college and stay together, one where they do not meet in college, and one where they meet in college but circumstances force them to part. Each chapter is anchored with a note of the version number, time, and location. In many cases, the three versions do not coincide with the same date or event. This is one of the strong points of the novel in that the versions differ enough to make them believable and never repetitive, but still contain many of the core elements of the characters. On certain occasions, such as Eva’s brother’s birthday, the same event is described in all three versions. Barnett’s limited use of this device is shrewd—it gives the scenes more levity and speaks to the inevitability of some events regardless (birth and death, especially).

What is perhaps more fascinating than the narrative structure, though, is Barnett’s undercurrent of art and the artist. The Versions of Us is peopled with artists in all three versions. Eva is a writer, Jim a painter, Eva’s college boyfriend an actor, two of Jim’s alternative wives artists, Eva’s parents musicians, Jim’s father a painter—the list goes on depending on the version. The professional successes of Jim and Eva individually depend on the version. Interestingly, when Eva is shown with a prosperous career, Jim struggles with failure and vice-versa. How their work and careers impact who they are to themselves and to each other is an intriguing look at what it means to be an artist not just in name but in identity.

Following a crushing death in the latter half of the book, Eva reflects that it “is as if she has been split into two, even three versions of herself—living, breathing simulacra—and lost sight of the original.” Barnett occasionally likes to drop in lines like these, reflecting a certain self-awareness of the novel’s structure that sometimes works, as with the line above. Version Two even has Jim make a literal painting of the novel’s conceit titled The Versions of Us. These moments do not damage the novel’s strength; however, perhaps one or two less would keep them from seeming so obviously referential.

On the whole, The Versions of Us is a compelling love story that engages the thinking reader beyond just the normal constraints of Boy-Meets-Girl. It is a well-written, enjoyable read that succeeds even beyond its clever structure.