BookCon sold out all 10,000 tickets! That’s kind of amazing. It’s also an opening that probably means absolutely nothing to you. It should, even if you never plan to go. 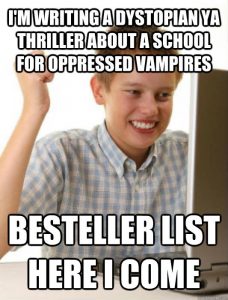 Every year, the book industry has an annual conference in New York City called BookExpo America (BEA). I haven’t gone in years, because it’s one of the most depressing events imaginable. (I’ll explain why in a minute.) But I’m really intrigued by the recent addition of “BookCon,” their attempt to build a ComicCon for books. They’ve recently thrown open the doors to the wider world on the final day—or at least, they’ve thrown open the doors to ten thousand book nerds willing to pay to get in.

That’s why the most interesting thing I’ve read in the past two weeks is this blog post from the director of BEA noting that while the main conference attendance is down, the BookCon numbers look great. There’s a lesson in that divide that every writer should learn, and it’s a counterintuitive one: stop caring about what’s on the bestseller list.

For decades, the meeting we now call BEA has been an important place for conducting publishing business. Booksellers from all across the country would come to see what the next year in books was bringing their way. However, the number of booksellers in American has been shrinking for years, and the entire purpose of the conference has been repeatedly called into question.

That’s not why I find it depressing, though.

To go to BEA is to be reminded that the world is not all that interested in your favorite writers and your favorite books. The kind of books that probably fill a literary reader’s shelves could not seem more boring to someone rushing to get a signed galley of a children’s book by a reality TV star. Being a literature nerd at BEA is like being a small city mayor going to the Democratic National Convention. It’s like having a flashing neon sign telling you NOBODY CARES.

Except When They Do

The new BookCon also has celebrities. Tina Fey and Jason Bateman were on a panel with John Green, talking about the movie version of The Fault in Our Stars. I’m sure the panel was awesome. But what makes ComicCon great is the geeks who show up in the most obscure cosplay outfits, and what will make BookCon great are the people who come ready to let everyone know how much they love paranormal romance novels about ghosts. It will be the fans of Chuck Klosterman or Elizabeth McCracken or T.J. Stiles.

The whole idea of BookCon should be a reminder that there’s a vast world of readers beyond the bestseller list, and they can’t wait for books that aren’t the kind everyone else likes.

One of the most common mistakes I hear smart people make when they’re thinking about writing a book goes something like this: “If I can just get a slice of Bestselling Author’s millions of readers, I’ll be all set.” I guess the idea is that people love Harry Potter, and there are no more Harry Potter books, so all you need is a kid on a broom and one hundred thousand people might buy your book instead.

It seems like it makes sense, but think of it like it was a sport metaphor. “If I could throw half as hard as Stephen Strasburg, I’d make millions.” Or, “If I could serve one tenth as hard as Venus Williams, I’d be set.”

If you’re going to write a book, you have to plan on being amazing.

When I was an editor, I read ten proposals a week that were credible. Credible is not what we were looking for. We were always looking for amazing, or at least, beloved by someone.

I often found myself saying, “A book for everyone is a book for no one.” Now, more than ever, if someone isn’t actively telling readers to go buy a book, they won’t go buy a book. A media appearance or book review saying the book is good but not great isn’t going to sell copies. You don’t need a stack of books in the store, hoping someone will buy your book out of serendipity or by mistake. You need a stack of fans pushing the book into other readers’ hands.

Thinking about the book industry the way it looks during BEA—huge sales number, seven figure advances, power brokers everywhere and PR people working overtime—makes you forget that this is only a tiny slice of the books that get published every year. Very few writers who have hit the bestseller list set out with the vague idea of pleasing millions of fans; they set out to please the people who love exactly one kind of book, and when those people liked it they convinced all their friends to buy it too. Game of Thrones, for instance, was popular with hardcore fantasy readers long before it became mass culture. The first book came out in 1996, and it hit #1 on the New York Times bestseller list in 2011.

Focus On Your Readers

Instead of trying to get a slice of Stephen Colbert’s readers, aim to change one thousand people’s lives. Write your book aiming to become the new favorite book of a niche. Think of it in concentric circles, moving out from a fanbase to a mass movement. If your book is good enough, it might move beyond those original one thousand, and five thousand more in that niche will also buy it. Those six thousand people will say it’s the best thing published in that niche in a long time, and maybe convince thirty thousand more casual readers to pick it up. If it’s good enough, those thirty thousand people will spread it to one hundred thousand.

And yes, someday you could find yourself as the big draw at BookCon. But if you can’t win over those first one thousand readers, you’re not going to get anywhere.