Home
»
Critical Essays
»
The Sheltering Sky and the Traveling American 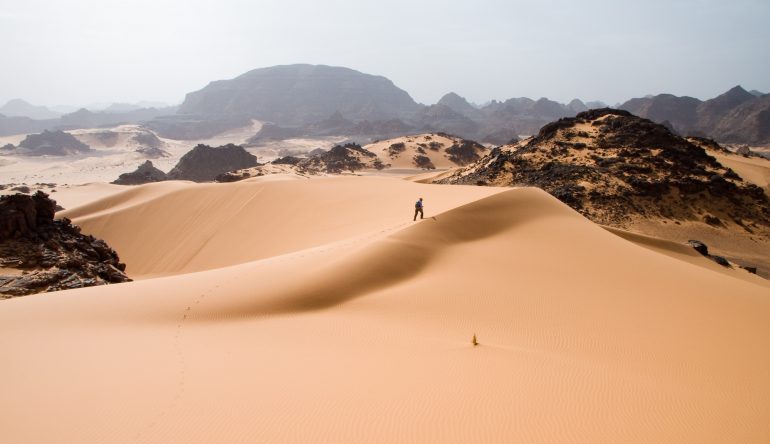 A year and a half after I moved back to the US after living abroad, and close to two years after the 2016 coup attempt, I returned to Turkey for the first time. On the surface, not much has changed. If I was simply a tourist, I would in fact think that nothing had really changed at all: In Sultanahmet, one of the city’s oldest and most touristic districts, the streets are packed with people, the shops are full, and the restaurant callers are still calling out to pull you into their establishments.

When I talk to my friends who have remained, a different story emerges, about the way politics have affected their lives and of feelings of uncertainty and hope for the future of the country. I wouldn’t know any of this if I was just a tourist, if my foreign friends weren’t invested in living in the country, and if I didn’t speak Turkish. Knowing the truth, however, has given me an entirely different perspective on living in the US where countries like Turkey are thought of as places where one travels, but not where one lives. Thinking about this has made Paul Bowles’s 1949 novel The Sheltering Sky a particularly interesting read, despite the novel’s age.

The tourists, travelers, and colonial police of The Sheltering Sky are mostly disaffected and unmoored Westerners who see their time in Algeria as temporary. Port Moresby, the protagonist, firmly defines the traveler as the superior being abroad, stating that the difference between them is that “the tourist generally hurries back home at the end of a few weeks or months, the traveler, belonging no more to one place than to the next, moves slowly, over periods of years, from one part of the earth to the other.”

This attitude misses out on the fact that the position of a “traveler” isn’t really superior at all—it is just a more privileged status in which one has the means to feel superior to an entire foreign country for an extended amount of time. To be a traveler is not to be one who must change in accordance to the culture that surrounds one, but to be even freer, remaining in a bubble while giving oneself the illusion of change. A traveler may, like expats, reject what they don’t like of their own culture, but in moving around so much and in lacking responsibilities within the communities they pass through, they fail to take up and even value the local culture beyond in a visual sense, and thus impose their own order of superiority on the host culture. Port, for instance, hates the hotel bar he, his wife, and his friend are staying in, seeing it as devoid of happiness, a “sad colonial room where each invocation of Europe was merely one more squalid touch.” Real life, he suggests, is in the Casbah itself,

in sequestered rooms that looked onto bright alleys where the cats gnawed fish-heads; in shaded cafes hung with reed matting, where the hashish smoke mingled with the fumes of mint from the hot tea; down on the docks, out at the edge of the sebkha in the tents…; beyond the mountains in the great Sahara, in the endless regions that were all of Africa.

There are more than enough instances of such racism in the novel—such as when Port’s wife, Kit, runs away from her husband’s dead body and into the desert, making sure that she won’t be discovered by anyone from the West—to convince the reader that Bowles is depicting these characters as the ugly Americans that we cringe about, serving as a warning to those of us who may fall into cultural smugness.

If you live in a place like Turkey where the easiest insult is to be called an Orientalist –shorthand for an arrogant Westerner—but also where history reads from the other side, it’s easy not to become Kit or Port. That is, of course if you integrate enough and care enough to learn about the country you’re living in.

Since The Sheltering Sky’s publication, it hardly feels like we’ve learned to think differently. Perhaps the world has always been small in American eyes.