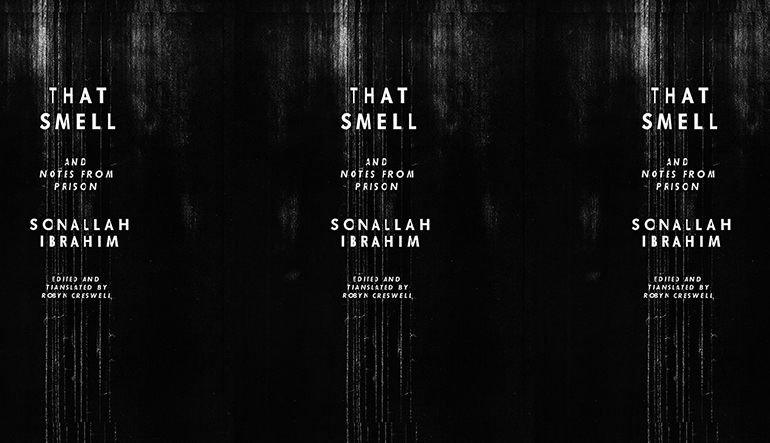 Sonallah Ibrahim’s 1966 debut novella, That Smell, appearing in a 2013 translation from the original Arabic by Robyn Creswell and accompanied by selections from Ibrahim’s Notes from Prison, follows an anonymous narrator in the days after his release from political imprisonment in Egypt in the mid-1960s. Free of the prison walls, he is now held captive instead by the policeman who comes to sign off on his notebook at his residence each night. This rather autobiographical novella, initially banned in Egypt and later republished in heavily censored editions, disrupted the literary norms of Egypt and the greater Arab region at its time, and even still pushes literary expectations today.

Written in a monotonous tone composed of short, matter-of-fact statements and simple observations, Ibrahim’s style clashes distinctly with the ornate, poetic standard of writing in Arabic during the mid-1900s. That Smell depicts the mundane realities of life, focusing intently on gritty, bodily functions and details such as tooth brushing, masturbating, and the visceral feeling of riding on a packed metro. Devoid of any overarching plot, the book propels the reader through the narrator’s adventures into the city of Cairo each day, marking time with the nightly appearance of the policeman who ensures the narrator returns to his house at dusk. Purposefully banal yet strangely suspenseful, Ibrahim’s controversial novella challenges the reader to find beauty in ugliness and to pay closer attention to the details our societies choose to ignore.

In a stream-of-consciousness style, That Smell runs from beginning to end in one continuous section, with the narrator navigating his life now that he has been released from prison. He rediscovers the city of Cairo yet remains continuously isolated and alone amid the masses of people, often retreating into sudden recollections of his life in prison and imagined scenes with others around him. One of the most striking flashbacks to his time in prison comes while his neighbor is fixing the lock on his apartment door. In his own apartment with his sister, he hears “a constant knocking sound,” which at first he ignores. “I talked to my sister and combed my hair. I heard the knocking again. I realized that the sound was coming from the other side of the wall. I said to my sister that we always did that when we wanted to speak to each other, or to warn each other.” The writing then switches to italics and a past scene from prison appears:

It happened every morning. We opened our eyes to the sound of regular knocks coming from the other side of the wall. We jumped out of bed, still half asleep, and tidied up, trying to remember not to forget anything. Then we squatted on our heels next to the wall, shivering with cold. The knocking would stop and we would wait. Then we heard the sound of their steps on the floor tiles, the jangling of chains and keys. When the key slammed into the lock, we flinched. Then they came in. Our eyes flew to their eyes, hard beyond description. Quick, sharp, frightening sounds attacked our ears. Their hands—fat and coarse and cruel—squeezed our hearts. The walls made four corners. The door was shut. The ceiling was near. No help.

Emerging from the flashback, the narrator moves into his living room and sees through the glass that the knocking sound is actually his neighbor, who had accidentally locked himself out of his apartment while fixing the doorknob. Knocking reappears multiple times in the novella—one night when the policeman knocks on his door, the narrator suddenly remembers his sister, who “said that when there was a knock at the door she always felt like someone was about to come in and beat her up.” Small, seemingly insignificant moments project the narrative into scenes of violence, whether from prison, imagined, or otherwise embedded in the social fabric of the narrator’s community.

Often, as with his sister’s fear of being beat up, this lingering state of violence revolves around women. The narrator repeatedly imagines himself being intimate with women, such as a woman with whom he merely makes eye contact on the metro, and comments on the lack of women’s privacy. One woman, Samia, “had no privacy at home, she slept in a room that was like a living room. She could never close the door and be alone and take off her clothes, for example. She couldn’t look at her body in a mirror.” Juxtaposed with the narrator’s constant visualizations of naked women and sexual intimacy, this lack of privacy reveals the metaphorical prison that the dominating patriarchy creates for women. At another point, the narrator meets “a girl who was blind in one eye,” who “came into the room and cried.” Her mother tells the narrator “that the girl was like that, that as soon as she saw a man, she cried.” Though partially blind, this young girl encapsulates a fear of gender-based violence that suffuses the novella, adding to the tense feeling of imprisonment after the narrator’s release from the physical jail.

Beyond the violence and representation of society as a prison, critics of That Smell denounced it as extremely vulgar and offensive. Ibrahim refuses the accepted norms of decency, choosing instead to describe the corporeal details of everyday human life. He emphasizes that we should choose not to look away from that which social convention dictates as unacceptable, yet which remains present, and in fact integral, to our existence. Among some of the shocking details he includes are scenes of public violence, such as a young boy being sexually assaulted while asleep in the prison; a man “covered with bloody newspapers” on the sidewalk around whom “women had gathered in the street, wearing black sheets and waving their hands and ululating over him in grief”; and several cars that “were turned over on their sides next to the [metro] rail. Their blackened innards stuck out.”

Although Ibrahim describes each of these atrocities in clear detail, the narration does not pause to reflect or offer any judgement or remorse—they are simply an unquestioned part of the everyday weave of the narrator’s life. Despite this absurdity, his focus on the bodily details of personal life are what truly shocked his early readership. In one scene, the narrator waits for a friend at his house, realizes he needs the bathroom, and passes gas. His friend’s daughter comes into the room and points out the smell, which he ignores, and then leaves after his friend fails to appear. Ibrahim also shows the narrator masturbating many times—the most outrageous choice according to his critics—and describes the appearance of his sperm dried on the floor the next day: “the traces of my pleasure looked like black spots on the floor.” While critics condemned this vulgarity, Ibrahim shows that it has a much greater meaning in an introduction he wrote twenty years after the novella’s original publication:

And there was a beauty in ugly actions, like passing gas in a bourgeois living room…Wasn’t a bit of ugliness necessary to expose an equivalent ugliness in ‘physiological’ acts like beating an unarmed man to death, or shoving a tire pump up his anus, or electric cords into his penis? All because he held a contrary opinion, or defended his freedom and sense of nationalism? Why is it stipulated that we write only about flowers and perfume when shit fills the streets, when sewage water covers the earth and everyone smells it? Or that we only write about creatures seemingly without genitals, so that we don’t violate the supposed decency of readers who actually know more about sex than we do?

Reading moments of supposed vulgarity in this light, Ibrahim calls out the hypocrisy of modern literature: the realism of the time did not truly represent everyday reality, instead dictating an oppressive social code that casts banal bodily details of life as offensive while actual violence and corruption run rampant.

Returning to the title of the novella, That Smell, Ibrahim imbues a pervasive smell in the setting and atmosphere, raising the question of why we willingly choose to ignore atrocities that attack our senses in a near literal manner. The most obvious manifestation of this comes when the narrator wakes up to find his sink faucet broken and water covering the floor of his bathroom and reception room. Rather than react, he writes, “I stood in the water and brushed my teeth and washed my face, then went back to my room leaving wet footprints everywhere.” The narrator drags the water through the rest of the apartment without question. Just a page later, such water reappears in Cairo city: “Wastewater covered the ground. The pumps set up everywhere carried water from inside the shops out into the street. The smell was unbearable.” Here, the narrator finally gives the reader some sort of a reaction by calling the smell unbearable. Yet, he simply continues without pause, “I met a man I knew who said he had woken up an hour ago and was rushing to an appointment.” Just as the narrator walked through the water in his flat rather than fixing the faucet or even attempting to stop and clean the water, life in Cairo rushes on amid the unbearable stench of the wastewater, a literal embodiment of complacency and continuing to live in shit.

That Smell caused a shockwave through literary circles. Denounced by the renowned editor Yahya Haqqi, who was well known for helping establish young writers, it did not appear in a complete edition until 1986, when it was published in Morocco. Indicated by its fraught publishing history, That Smell delivers a powerful rebuke of literary traditions and social norms. Ibrahim’s short, simple, and observational text stares the reader in the eye, challenging our communal reflex to overlook all things we deem ugly, from the basic physiology of our bodies to public brutality and government criminality. In Notes from Prison, Ibrahim states that “the artist’s role in Egypt today” is to “choose the direction and change the direction. He must lead and play a role in everyday life, armed with his technique, personal experience, self-awareness, persistence, and the readiness to sacrifice.” Confirming the importance of this in the face of censorship, he later writes, in the introduction to the 1986 edition, “Confiscation didn’t put an end to the book for it was already out in the world (a lesson the state apparatuses of Arab countries might learn from).” Despite the trouble and humiliation Ibrahim endured as a political prisoner and later as a writer in attempting to publish his work, the timeless value of his lessons is undeniable: the impositions of decency and social and literary norms often serve only to exacerbate the problems they claim to denounce.