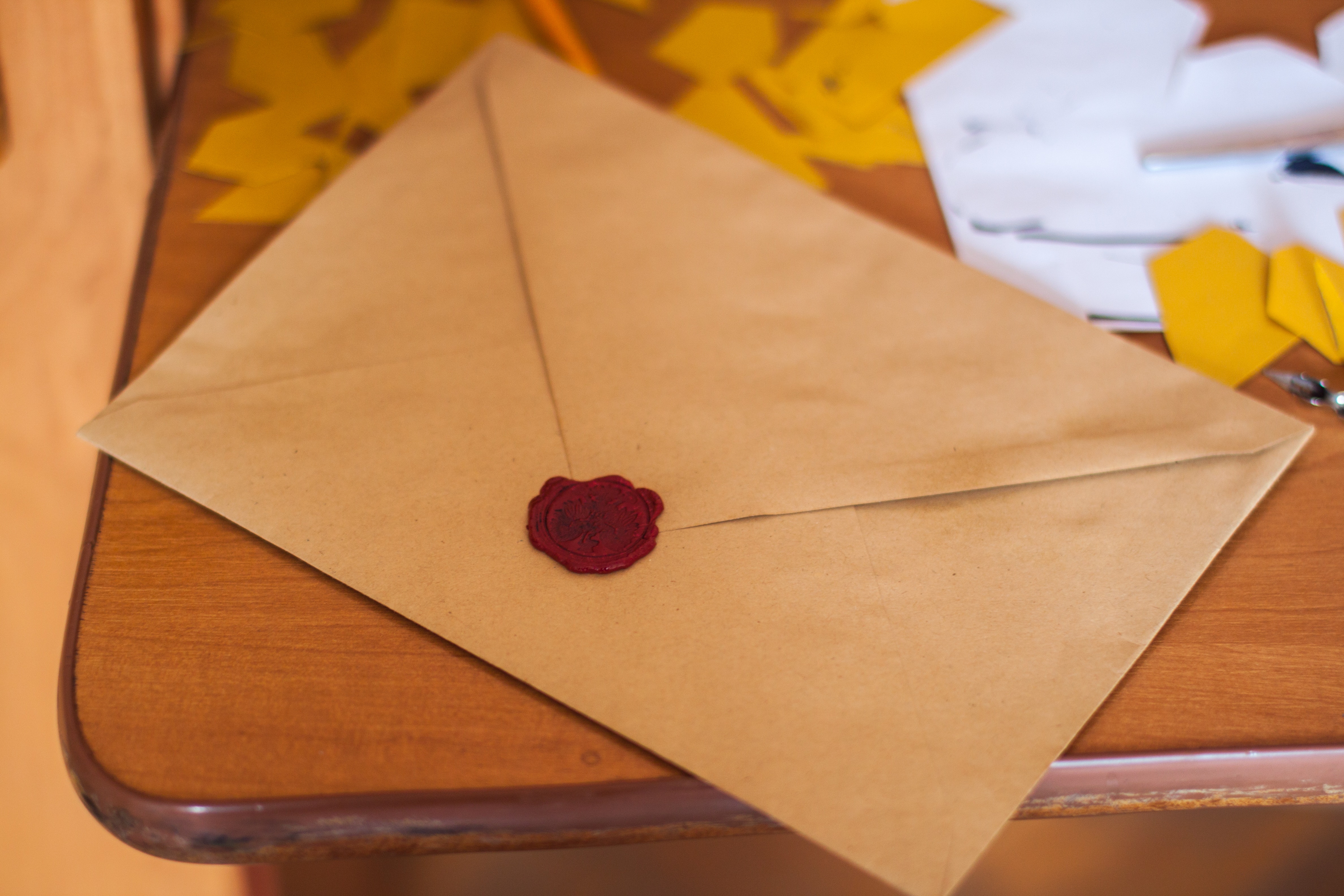 A few weeks ago, my nine-year-old daughter handed me the first love note she’d ever received. It was a white paper napkin tied with a bit of shiny blue ribbon. Below the ribbon were pink magic-marker dots and a green number 1. A boy had slipped it into the pocket of her jacket during the school day. When I picked her up after school, she turned it over to me, in that way kids do when they’re still young enough to believe that a parent has the power to make such bewildering, embarrassing apparitions vanish. She said, simply, Take this.

Knowing better than to say anything, I tucked it into my bag and then forgot about it…only to realize on the weekend that I’d been carrying it around in my bag for days.

My complete inability to throw it out at that point has a history. The blond-haired boy with the devil-may-care attitude who once showed me flagrant devotion in third grade (causing me an embarrassment that similarly harmed his cause) didn’t live to see twenty-five. I felt undeniably protective of this boy who’d magic-markered a note to my daughter. I couldn’t help thinking of that line from “Araby”: I imagined that I bore my chalice safely through a throng of foes. I thought: I’ll carry the kid’s love note around for him.

What does one do with the detritus of unrequited love?

In Jewish tradition, sacred documents are disposed of with enormous respect—and the category of sacred documents includes not only prayerbooks and Torah scrolls, but anything that contains the name of God—even daily correspondence (which traditionally begins with the Hebrew date and the acronym for with the help of God). Pages that carry the divine name can’t simply be discarded—that would violate the injunction on using God’s name in vain. Instead, papers are stored up in a trove called a genizah…then eventually given a ritual burial as though they were human.

Two years ago, I visited a relative in London—an impossibly kind septuagenarian, a slender expatriate Frenchman who rides a motorcycle, used to work as a shepherd, and spoke or recited poetry in eight languages during the hour I spent with him. Near the end of the visit, he handed me a gift: one of his late wife’s collection of antique dance cards.

How easy it is to forget that there was once an actual thing called a dance card—a physical object that recorded a single evening’s roster of desire and duty. This one was filled out at the Westgate Hotel on April 23, 1895. Whoever filled out this card—presumably a young man—clearly didn’t want anyone looking over his shoulder to be able to read what he was writing. Even with a magnifying glass, I struggle to make out his tiny script: the name of each dance partner, and a brief description of what she was wearing or looked like—presumably so he wouldn’t forget whom he’d asked to dance. “Brandy—white flower in hair.” “Wass—green—fussy hair—short.” Our hero found partners for 18 of the 20 dances. He danced with a certain Evans four times. On one line near her name is something I swear looks like gold kissing.

But she did not, it seems, save her last dance for him. He danced that one with Young…whose comment line seems rather despondently blank.

If all the dance cards in the world were deposited in the genizah, would the sounds of those evenings once again be audible—the hurried scratching of miniature pencils, the awkward squeak of shoes on the floor when the music stopped too soon—or far, far too late? The squall of tiny noises, flurrying from all the collected dance cards from all the Saturday nights in history, will be sensed by elephants miles away.  Global watersheds will, for just a moment, stop shedding; Albert Einstein will look up, blinking, from his patent-clerk’s desk; Captain Ahab will sashay Evans away from her partner and back to our hero and the San Andreas will not be unmoved.

We live in an age of instantaneous deletion, in which words we deem too embarrassing, too earnest, can be vanished at a click. Technology now lets us erase multiple drafts, hide our human struggle. Visible nowhere are the impress of a hand on the page, the paper worn away by repeated erasing, the trace of tender feelings committed, un-committed, and re-committed to paper.

I’m not religious, but some things make me feel what I imagine religious people might feel: a crammed box of the airmail letters my father sent home to my mother every day for more than a year during the Vietnam War. The stash of old notes my friends and I used to pass to one another in high school—many featuring the tidy, carefully lettered lines of the girl who was gay but couldn’t tell us so. Or this: the two drafts of a letter written by an American woman working in the DP camps after WWII, which I read last year in the archives of the American Jewish Historical Society. One copy was the dispassionate ‘official’ draft of her report on her work. The other, written days earlier, was a despairing account in which the writer documented her realization that the possessions that she’d been tasked with returning to their rightful owners could not in fact be returned—because there was no one left alive to return them to. That draft was marked “NEVER SENT.”

In rare books rooms, doing research for a historical novel set in the 17th century, I love watching people go to great solemn lengths to protect pieces of paper. I love it when I have to make an appointment to see a particular document, and even more when the document requires security—when terrifyingly severe librarians confiscate pens and notebooks and laptops. Under the towering, breathing silence, at tables lined by very thin students with very bad posture, a page is laid out on a furrowed pillow on which I’m tempted to rest my own head. I read documents I’m forbidden to touch, not even to turn a page, and make notes with a pencil stub grooved with some unknown scholar’s tooth-marks. Some of the documents require this level of care because they’re written with iron gall ink—an ink used widely in the time period I’m studying. Iron gall ink is a quirky thing. Some forms stay stable for centuries, while others eventually eat through paper. In cases where there’s been corrosion, single letters can be spliced out of the paper, burned away by the chemicals in the ink. Entire words or phrases can just dissolve themselves out of a letter over the years—especially in spots where the writer lingered over a word (dripping extra ink) or wrote with a heavier hand to place added emphasis. If the writer let a blot form on a word…300 years later the acids may have excised that word and only that word.

And if all those excised words—words bitter enough to eat through paper—were added to the genizah? Right next to all the world’s self-censored letters?

This is my first post as a blogger for Ploughshares. I’m composing it on my computer. You’re reading it on yours. How civilized, all these pixellated words. They don’t blur or wrinkle like a magic-markered napkin. They burn through nothing that’s visible. They show nothing of where I might have hesitated—where the clock blinked the seconds past, and I moved the cursor back over sentences and clicked them into oblivion, because I wasn’t sure, dear reader, that my words would persuade or even interest you.

The digital age lets us all play it extraordinarily cool. But no writer, really, has the right to play it cool. A writer needs to be shockable, permeable, willing to be delighted or stricken. Writers are ecstatic people, though most of us hide it well.

A blog, like any piece of writing sent out into the world in the hope that an unknown reader might linger over it, asks the same questions a love letter asks: Is anyone out there? Are you listening? Do you notice what I notice, do you feel this way, too…even just a little bit? Even if it’s on a tidy and well-lit screen, with no burnt-away words, no smudged ink or shiny ribbon. Even if the computer silently brushes away our tracks behind us as we go. All writing is an unrequited love letter.