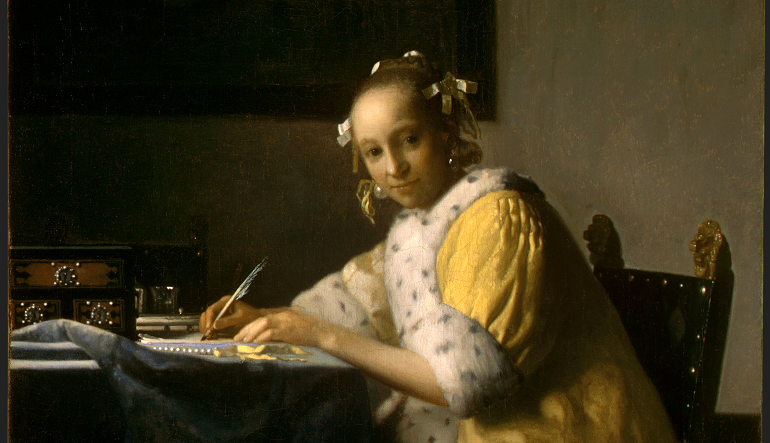 Spooky season isn’t quite over in France. Let me tell you about the latest thing that’s got the French elites up in arms: in case you didn’t know, the French language is assailed by a horrible scourge that will most certainly lead to linguistic extinction. It’s called—ominous drumroll, please—inclusive writing.

These are the facts: French is a highly gendered language. Every noun is gendered, and all adjectives follow an agreement rule regarding number and gender. One of the most basic rules in French spelling and grammar is, very simply: le masculin l’emporte sur le féminin. The masculine overrides the feminine. If you have a crowd of fifty women and one man, and you use an adjective to describe them, the adjective must be in the masculine form. The pronoun you’ll use will also be in its masculine form: ils to say they.

This wasn’t always the case. A few centuries back, other grammatical rules (like the rule of proximity) existed that didn’t rely so overtly on centering one gender over the other. It’s only in the 18th century, with the rise of the French Academy, that the infamous masculine over feminine agreement rule was decreed, precisely because men were considered the dominant sex. As such, it was only natural that this would be reflected in the language itself. Right? Turns out, feminists disagree.

To counter this very overtly political decision to make the masculine the dominant and/or neutral form in language, so-called “inclusive writing” has emerged over the past couple of decades or so (the term “inclusive” here is highly problematic, and should be replaced by “gender-neutral” or something to that effect, but that’s yet another debate). For example, take the sentence “the students are tired.” In traditional French grammar, this would be “les étudiants sont fatigués.” Reading this, both “étudiants” and “fatigués” are in their masculine form: in both English and French, there is no way of knowing the exact makeup of this student group regarding gender, but while the English word “student” is technically gender-neutral, the French word is gendered, indicating there’s at least one male student.

If we don’t know what gender the students are, or if we know that this is definitely not an all-male group, then the inclusive version of this sentence looks something like this: “les étudiant×e×s sont fatigué×e×s.” The mark in the middle can be replaced with a period or parentheses, depending on personal preference.

This year, a school textbook started using inclusive writing, to show it wasn’t such a big deal after all, and to ensure that kids could get early on an idea of how to write within such a highly gendered language in ways that didn’t subtly reproduce a certain type of domination.

This sparked a national debate, where experts of the history of French grammar suddenly appeared and railed against what is unmistakably the final step in the feminazi agenda: the destruction of the French language. The French Academy itself stepped in with a unanimous declaration that inclusive writing created a “mortal peril” (no less!) for the language. This is France, after all, so you know things were bound to escalate quickly.

Still, it’s troubling how much energy people from every part on the political spectrum are devoting to throwing ridicule and invectives at the proponents of inclusive writing. Their arguments (it’s ugly, awkward, unpronounceable, self-righteous, a waste of time, doing a disservice to the feminist cause, a mark of fanatical feminism) are being debunked over and over again, and yet, male writers, philosophers, other self-proclaimed experts, and true defenders of the French language, are popping up like mushrooms. The slimy, poisonous kind.

What’s even more disturbing is the number of women who’ve joined their ranks. Women who feel compelled to double down on the respectability and meritocracy discourse, explaining to us that they’ve never felt oppressed by a grammatical agreement, so why should we?

This speaks to a profoundly misogynistic and conservative turn that’s become entrenched in the contemporary French mindset, even among so-called liberals. It also sheds light on a very conscious denial of the truth: that language matters, enmeshed as it is in a certain representation of the world. It’s galling to hear writers especially deride inclusive writing: people whose entire trade revolves around words—using the right word to create the right effect—refuse to admit that language, down to its smallest units, is inherently political. Or at least, they deny when it suits them that language has always been a political tool.

That this is happening simultaneously with the #MeToo social media campaign, is no coincidence, and reveals the ugly truth: the feminist struggle for justice and equality is not over. Both #MeToo and inclusive writing are perceived as the latest attempt by women to keep on “victimizing” themselves, and as proof that feminists have no sense of priorities: with all the bad things happening to women elsewhere on this planet (cue the racist undertones), French women (and genderqueer people) have the “luxury” of “complaining” about grammar and being “supposedly” harassed.

Is it really a privilege to be able to point out how language impacts our modes of representation, or is it common sense? Is it a privilege to demand visibility, when erasure only guarantees continued domination? (I won’t even get into the “is it harassment or is it seduction?” debate.)

What the opponents of inclusive writing have gotten right is that inclusive writing is about disrupting the status quo. It’s not about preserving tradition, if tradition reinforces old patterns of domination; it’s not about cajoling the feelings of those who’ve always had the privilege of seeing themselves everywhere. It’s about pointing out that what we construct to be “neutral” is never naturally so.

Inclusive writing won’t destroy the French language. Instead, it helps us reckon with the language’s own inner patriarchal demons, and sharpen our understanding of how language is used. It’s about accountability. And that’s why it’s so scary to its opponents.