In our Writing Lessons series, writers and writing students will discuss lessons learned, epiphanies about craft, and the challenges of studying writing. This week, we hear from Andrew Jason Valencia, an MFA candidate at the University of South Carolina. You can follow Andrew on Twitter @AValenciaWrites —Andrew Ladd, Blog Editor 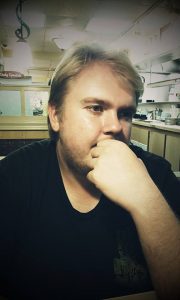 Of all the adjustments I had to make when I enrolled in an MFA program, coming to terms with depression was the most confusing. For those of us who study fiction, it’s easy to fall into the habit of viewing life in terms of epiphanies, of measuring our personal growth according to moments of clarity or transcendence, when suddenly we feel that something major has changed, and that the change will be permanent. Or, as the character Bonaparte puts it in Frank O’Connor’s story “Guest of the Nation”: “And anything that happened to me afterwards, I never felt the same about again.”

The problem with depression is that the condition often presents itself as a total absence of feeling, good or bad—so that even if you find yourself in a moment when things suddenly seem clear, it’s unlikely that your brain will register the experience accordingly.

Try to imagine any classic scenario in fiction playing out when the character’s mind refuses to process the stimuli dispensed by the plot. Tom Buchanan confronts Jay Gatsby about his relationship with his wife. Gatsby responds aggressively, demanding that Daisy admit that she never really loved Tom. Daisy is unable to say it, which leaves Gatsby is heartbroken. Everyone piles into their respective vehicles. All except for Nick Carraway, who, in the midst of a depressive episode brought on by his thirtieth birthday, decides to take a taxi back to West Egg alone, leaving the rest of the cast of characters to their own devices.

You see the problem here? How can anyone write honestly about depression when so much of the depressive experience involves abandoning that singular trait—agency—which, for many readers, is the litmus test for whether or not a character works in his or her own story?

For my own part, coming to terms with mental illness meant experimenting with a range of potential solutions until I found a treatment that worked for me. But the whole process involved a lot of trial and error, none of which adhered to anything like a traditional plotline. In short, the things that failed to improve my condition included, but were not limited to: binge drinking, daily exercise, weight loss, smoking, quitting smoking, quitting drinking, Zoloft, support group meetings, Wellbutrin, travel, solitude, socializing… I had choice in the matter all along, but I never felt like I had enough agency in the situation to plot my course rationally and expect a given outcome.

In this way, I think depression can serve as a reminder of the extent to which everyone is simultaneously empowered and trapped in any given situation—fiction writers and fictional characters alike. Understanding this duality, and recognizing the necessary limits of both freedom and fate, may help us as writers to understand our characters more completely, and to view ourselves with a little more honesty and forgiveness.