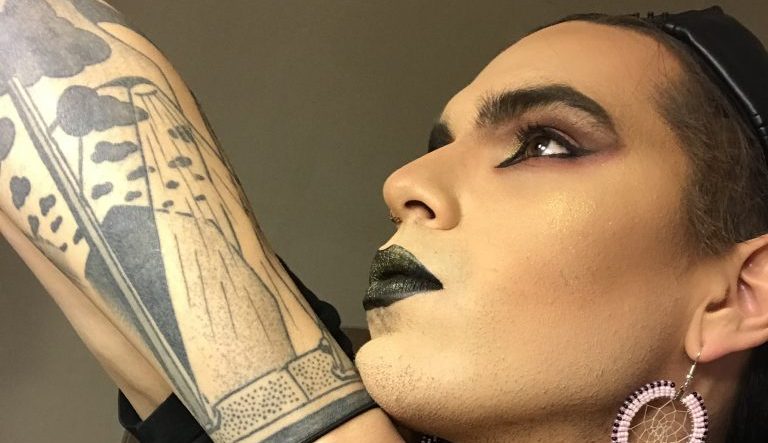 Joshua Whitehead is an Oji-Cree Two-Spirit/Indigiqueer from Peguis First Nation (Treaty 1 territory). You might be wondering what, exactly, that means. As part of the introduction to a recent interview with Whitehead at CBC Radio, the host writes: “When you look for a clear definition of the term ‘two-spirit’ you’ll quickly find that there isn’t one”:

Two-spirit, in the simplest sense, is an Indigenous person who is a member of the LGBTQ community.

But Whitehead said his sexual identity is a ‘braiding of two worlds’—his queerness and his culture. The word Indigiqueer is his way of making a space, land, and ceremony for that identity.

‘I go by both two-spirit and Indigiqueer. One to pay homage to where I come from, from Winnipeg, being kind of the birthplace of two-spirit in 1990. But I also think of Indigiqueer as the forward moving momentum for two-spiritness,’ he said.

One could refer to Whitehead as a poet, fiction writer, and critic, and yet, Whitehead’s work also exists without such easily defined boundaries, blending elements of critical commentary and performance in his debut poetry collection, full-metal indigiqueer (which was published last fall to multiple printings by Talonboks), with the lyric performance and cultural commentary in his second book, the novel Jonny Appleseed, published last month by Arsenal Pulp Press. In a review of full-metal indigiqueer in Plenitude Magazine, Gwen Benaway refers to the book as “a cyberpunk dystopian vision of modern queer Indigenous life.” Benaway writes that “full-metal indigiqueer is one of the most distinctive and original collections of Indigenous poetry ever published. It blends Indigenous futurism with colonial hangovers in dense text that scrolls across the page as if spit out by an old dot matrix printer possessed by an NDN ghost. The strongest feature of Whitehead’s work is how his writing blends genres, poetic influences, Cree and English language, and queer embodiments into a strange poetic cyborg.” A coming-of-age novel that could as easily been targeted to a Young Adult audience, Jonny Appleseed is a sex-positive book that includes tenderness and trauma, as well as references to Queer as Folk and sex columnist Dan Savage. Whitehead is currently a PhD candidate at the University of Calgary (Treaty 7 territory) where he focuses on Indigenous Literatures and Cultures in the Department of English. He is the 2016 winner of the Aboriginal Arts and Stories Challenge, which awarded him a Governor General’s History Award.

Whitehead’s ongoing engagement with reclaiming language is reminiscent of the work of the late Vancouver writer Roy Kiyooka, who composed the bulk of his work in, as he wrote, “inglish,” refusing to allow his Japanese self to be overwritten by Colonial European whiteness. Using charged language in a deliberate way, Whitehead’s linguisitic twists are playful, direct, and, on occasion, confrontational. Even in our brief exchange, he writes “NDN” for “Indian” and “wînipêk” for Winnipeg, shifting language to speak very much on his terms. A few months ago, we had the opportunity to talk about his work in weaving together language, theory, politics, history, culture and sexuality.

rob mclennan: You wrote recently that your ongoing work focuses on “Indigenous reclamations, and to be more specific, Indigiqueer reclamations.” How did you get here, and what brought you to articulate your reclamations through poetry?

Joshua Whitehead: What is poetry from an NDN perspective? Poetry, for me, has always been the most political of the modes of writing; it’s so attached to refusal, resistance, and resurgence in the canons and in our current Indigenous literary moment—I think here of Billy-Ray Belcourt, Gwen Benaway, Leanne Betasamosake Simpson, Layli Long Soldier, Tommy Pico, Jordan Abel. Poetry, for me, has no limitations, no edges: it’s a mutant, it’s a cyborg, it’s a warsong.

I like poetry because it lets me build worlds from words in digital/cyber spaces: here I’m a time-traveller, here I’m burning in the pyroclasm with John Connor, here I’m Duessa that archmage-imago. Poetry sharpens language into an arrowhead, weaponizes syntax, grammar becomes a gloved-blade, stories become a haunted house. I think I needed that—I needed to empower myself because the world disempowers me at every turn and every angle. So I love the transformative elements of poetry. Sometimes I feel like poetry gifts me renewed vision, a passage into the Fourth World; sometimes I feel like the NDN “A Square” from that novel, Flatland, living in a multi-dimensional space where a penny is a circle, is a sphere, is a globe, is a world, is a universe. Poetry lets me shift perspectives, you think there exists only one world? Well, I’ll give you galaxy in a sentence, I’ll show you survivance in a handful of words.

Poetry is a queer quill, poetry is a limp-wristed slap, poetry is a femme fatale; I like that about poetry, I craft mirrors for myself, for Indigiqueerness, NDN vanity is a viral vein, see how big “I” am?

I find myself asking the world too often: what is 2S/Indigiqueerness? What does it look like, who were we as people, who are we as people? People want to tell me that 2S folx were revered, medicine people, shamanic, mystical, highly respected. I always have to ask them, “were?” So that too I am reclaiming: myself. Taking my body out of the “was” and placing it into the “is.” When I write, I picture the child in me feeling sullen, confused, desperate for that answer. All I can give is story, which is to say a blueprint for constructing the “I.”

I say: sharpen the fang of a poem and let it wreck havoc on their hi/story, drain the life of canonicity—I found myself a jingle dress at the bottom of that well. Language is the body and I brand my NDNness with my poems.

RM: Your first full-length poetry collection, full-metal indigiqueer, moves at a pretty high speed, incorporating references and materials from a great many sources, both literary and pop culture. What was it that you felt blending those outside elements allows in your work that wouldn’t be possible otherwise?

JW: The fractured dimensions of poetry make space for a lot of creativity, revision, crafts a fun-house of the imaginative. My novel, Jonny Appleseed, takes on a lot of pop culture too but not to the same calibre that full-metal indigiqueer does. I believe it’s my training in Cultural Studies, which I did as my MA, that forces me to look at the world askew. I think of things like “taste,” or capital “L” literature, or “low brow culture” as important as anything canonized, if not more. If writing is a reflection of the times, I wonder whose reflection is being shown and whose isn’t and in what distorted forms those images appear?

I also think it’s my understanding of Indigenous epistemologies—as [Thomas] King once orated, everything is story: land, beadwork, braided sweetgrass, brushstrokes, skin—that lets me see myself in the weirdest of homes. I think of full-metal indigiqueer as if it were VR (virtual reality). You’re strapped onto the back of this viral trickster and you travel at near light speed across nations, countries, languages, genres, centuries. You’re bombarded with images, some hurtful, some prideful, and for a brief amount of time I think you get to experience the livelihood of a 2S Indigiqueer femmeboy. I don’t know if you’d get that same type of experience, feel that embodied affect, with anything other than poetry. Maybe that [Philip] Sidney had one thing right, the point of poetry is to move—mine is just moving blockages out of the way and transporting a peoplehood into the future.

RM: There is such a performative element to full-metal indigiqueer, to the point that I could see a stage or film adaptation occurring, akin to Michael Turner’s Hard Core Logo, for example. How conscious were you of performance during the composition process? Was this even a factor?

JW: I think this is where poetry and I diverge, or, at least, poetry in the sense of its Western aesthetics and its sonics. I am so blessed to emerge from wînipêk—our literary and art scene is vast and coagulated in our downtown. I spent a lot of time learning from spoken word artists, musicians, poets, and rappers while I was here. I attended many an open-mic (including helping run one at the University of Winnipeg) as well as poetic hubs such as Speaking Crow. That, and coming from an ancestry of oral storytelling, I really honed in on how I wanted my stories to sound versus how they look on the page. I didn’t want to speak with that typical “poet voice,” I couldn’t afford to be timid or meek, I needed the voice to boom and move, needed to organize. Sure, my page is frenzied, chaotic, experimental, and littered with digital poetics, but it’s the sound I think that’s more important: the performance, the orality. I can’t say I write with that intention in mind but perhaps it’s more that my inner rhythms organize themselves in meters, refrains, and anaphora. Someone recently told me that I sound like a drum when I perform—that, I think, is the aesthetics of my storytelling, one imbued with an ethic, an accountability, sound like a round dance by which I really mean sound like a social healing song. Indigenous otâcimowak serve up some lovely maskihkiy.

RM: Through your poetry, fiction and essays, do you see yourself, at the core, as a storyteller?

JW: I do. I like how the word calls me home, to a specific region, to a specific peoplehood, and to a tradition that arcs back into time. It’s easy enough, I think, to romanticize and excavate meaning from Indigenous epistemologies. A dear friend once told me that when you step onto a piece of land on Turtle Island you are enveloping yourself into the past, present, and future: there are stories written on the land, petroglyphs that point to waterways and hunting grounds, droplets of fluids that (be)foretell trauma but also triumphs, and the land storytalks through seasons, migrations, through renewal and disintegration. So when I say I am an otâcimow, a storyteller, I wrap myself in those hi/stories, with the land, into an atom that intersects time, a lemniscate that looks too much like a Métis optic, a post-contact methodology. I think that’s what differentiates Indigenous literature from CanLit, that acknowledgement that isn’t emptied of semiotics but is brimming with accountability. It’s a decolonial tactic for me, one that removes me from the nation-state and summons me back into my sovereignty.