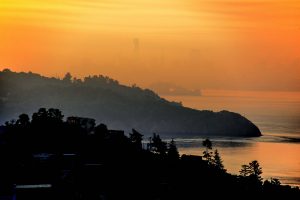 News images of natural disaster can be paradoxically surreal, especially if the disaster’s happening in a place you know and love, but have left. Earlier this fall the images of Northern California burning were overlaid with the voices of loved ones in San Francisco telling me about headaches from the smoke, days of smog. The fires are back, this time in LA—again the apocalyptic images and the voices on the phone, fears of evacuation. Place-names take on new, horrible significance. News photographs make one feel both painfully near and distant. Poetry, of course, deals with the unfathomable—how might poets capture complicated interactions between fire and familiarity, fire and violence, distance, and detachment from disaster?

The griefs of others—beautiful, at a distance.

The first line is lyrical, nonspecific—the fire of the title might be a tamer fire (campfire, stove fire) or a metaphorical fire altogether. The fire in its actuality is absent from this first line: the eye of the poem observes, instead, the moon. Slowly, the subtle pain of the poem unfolds. The second line, in its broadness, is evocative of the many smells, both awful and pleasurable, we might associate with fire—fire can evoke wood smoke on an autumn night or the smell of burning hair. The urgency of this line—the “Also” with which it begins—suggests a kind of breathlessness, the darker implications of “scent.” The poem’s last line makes it clear what kind of fire this is—a wildfire observed “at a distance.” Hirshfield exposes in this last line a stark reality about the way we react to disaster: we are able to aestheticize when we see something horrible happening far away. Hirshfield doesn’t ascribe moral judgment to the detachment of the last line. Finding the pain of others beautiful is foolish. But, in the very existence of the poem, the question: what else can one do with the “griefs of others” except to eventually, at a distance, make art that captures and responds?

“Flame,” a poem by C. D. Wright, enacts the idea that fire can be written about, at a distance, in a way that acknowledges both beauty and violence. Wright’s “Flame” looks sparse on the page, written in pairs of words that form a rhythm as the poem gathers speed:

What at first reads as a cluster of images forms itself into a quasi-narrative of a car accident that ends in fire (“the burn                  the burned            the burning”). The structure of the poem mirrors both the fragmentation and repetitiveness of disoriented driving. Images and phrases rise out of the white space on the page, forming a senseless litany. In this way Wright brings the reader into the unfolding of the disaster, into the very breath of the driver and her confusion. Clarity is elusive until the poem’s last line, and the use of the gerund signals that the violence is happening in the present tense. Wright and Hirshfield employ similar language when describing disaster: “the scent” and “distance” appear in both poems. Both ask the reader to be present for both beauty and violence, though in different ways. Hirshfield asks us to be present in our reaction to a distant flame; Wright puts us in the car with it. Both write with the knowledge that living in the contemporary world we’re inundated with images and stories of disaster. Both show us what we’ve seen before in new ways, ask us to connect.

In his poem “Rabbits and Fire” Alberto Ríos also deals with the idea of disaster and repetition. The poem opens:

But one last thing about the desert,

He goes on to describe jackrabbits that get caught in brush fires in the Sonoran desert. The poem is full of harrowing images: “What happens is what happens: They catch fire / And then bring the fire with them when they run.” Hirshfield contemplates the ethics of observing disaster at a distance; Wright brings the reader into the subjective experience of disaster; Ríos unearths small, unseen casualties in order to make a reader who’s desensitized to fire feel its horror again. In some ways, this is the project of each poem: by giving the reader an image she might not have noticed, these authors make disaster feel real in a news cycle when it begins not to. Knowledge is painful, these authors suggest: as Ríos writes in the last line of his poem, “I’m sorry for the rabbits. / And I’m sorry for us / To know this.”

This, in the end, is perhaps our obligation towards fire and other disasters: even if we’re far away, to in some small way know, and feel.