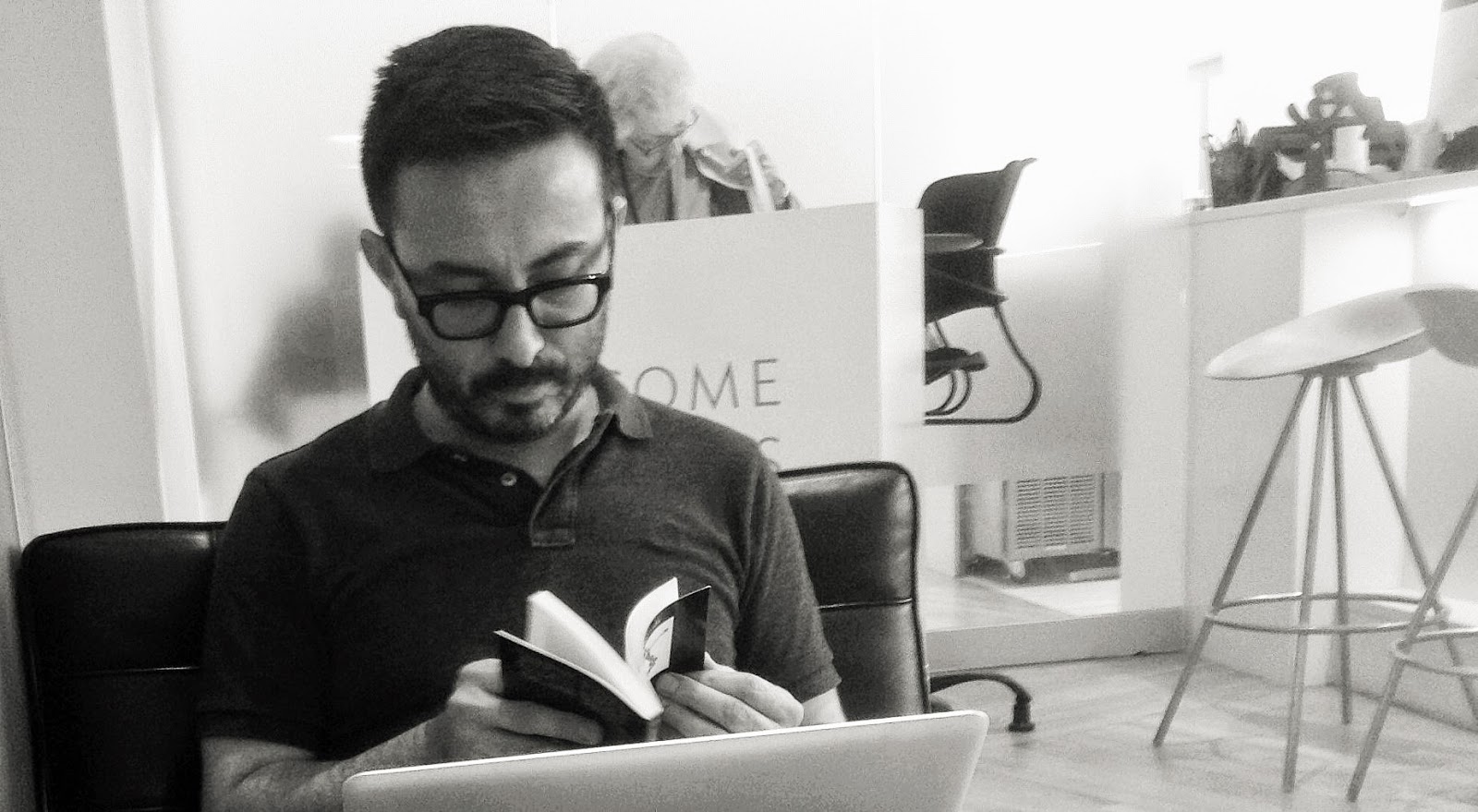 It’s a little known secret that Ruben Quesada is quietly responsible for the promotion and community infrastructure that so many contemporary Latina/o writers enjoy today. As an editor, he plays a direct role in outlets such as Codex Journal, The Cossack Review, Cobalt Review, and Luna Luna Magazine, though perhaps his most visible work comes to us via Queen Mob’s Teahouse where he serves as a Senior Editor. He’s the author of Next Extinct Mammal (Greenhouse Review Press) and the translator of Luis Cernuda’s Exhiled From the Throne of Night (Aureole Press). Currently, he’s editing the Latino Poetics Anthology (University of New Mexico Press) which will feature essays on Latina/o poetry by new and emerging Latina/o writers. Chances are if you’re a Latina/o writer working in the digital sphere, you owe something to Quesada. A hearty “thanks” at the very least. Here we talk about his work at Queen Mob’s Teahouse, the Chicago Literary scene, and strategies to overcome the exclusion of Latina/o voices in the American literary dialogue.

Daniel Peña: One of the things I’ve noticed about your writing is that you explore setting almost as much as you explore psyche, which I love. In Next Extinct Mammal you’ve got “Mornings in Cudahy, California” and “Store,” poems that give us this incredible texture of East L.A. I know you’re also really involved in the Chicago scene and you’ve spent some time in my native Texas where you earned your PhD. I wrote up a thing about Next Extinct Mammal a few years back and a poet friend of mine was like, “Hey, where’s Ruben Quesada from?” And I was like, “I don’t know—the internet?” Which was a joke but, actually, kind of true—you’re a Senior Editor at Queen Mob’s Tea House. What is Queen Mob’s? Could you talk about that scene?

Ruben Quesada: Sometimes it feels as if I’ve always lived online. While I love inhabiting different physical spaces (places around the world), I feel most comfortable online. When I took on the role as Senior Editor of Queen Mob’s Teahouse in late 2015, it felt like the start of a metamorphosis. QMT is an ever-expanding magazine.

Queen Mob’s Teahouse began in 2014 as a U.K.-based online magazine. It is and has always been a collaborative staff of international editors. I’ve heard from readers that Queen Mob’s is exciting; they love to discover what we publish. To put it simply, QMT is dedicated to writing, art, and criticism. We want to feature innovation and thought, in all forms of media, new and old.

At the start of 2016, I started two featured projects, DEAR POETRY EDITOR and (Queer) Latino Writers. These projects were both borne out of a larger project about Latino poetry and the process and trials of editing. The Latino Writer series introduces readers to contemporary Latino writers, while DEAR POETRY EDITOR introduces readers to editors and their perspectives and experiences with poetry and publishing. Queen Mob’s Teahouse is an exciting place.

DP: It’s interesting that you mention QMT as a place because it feels kind of like a place. At the very least it’s definitely a setting for certain conversations surrounding marginalized or avant grade literature and art (I’m thinking specifically of the Misfit Doc vertical) and it’s proudly international. It’s everywhere! My Twitter feed, my Facebook feed, in dinner conversations (I’m sure) around the world. And, of course, the editors seem to be from everywhere. Does place affect the work you do at QMT? Does the Latina/o Chicago scene factor into the broader work you do with (Queer) Latino Writers?

RQ: QMT is everywhere. Place plays a unique role in the magazine’s presence. There’s almost always someone awake in some part of the world who contributes to QMT and their contribution keeps the magazine active around the clock.

My work with Latino writers factors into most of the work I do. I am the founder and moderator of the Latino Caucus for the Association of Writers & Writing Programs (AWP). As a moderator and organizer, I am invested in Latino writers at all stages of their career. The Latino Caucus serves to increase the presence of Latina/o writers, editors, & publishers in all areas of the writing community. At the moment, the tools we have available are social media, existing literary institutions, and each other. I am interested in creating visibility of Latino writers and I hope to inspire others to make Latino writers visible in all forms of media.

It all comes down to visibility. The ability for someone to see you or to see yourself in the world plays an incredibly important role in the development of who you are and the possibilities you believe you have.

Typically, Latinos are portrayed as criminals, servants, or other stereotypical cultural caricatures. Despite our longevity in the U.S., Latino writers still haven’t managed to crack the literary Canon—that is, until the late 20th century. Over the last 100 years writers like Rudolpho Anaya, Sandra Cisneros, Tomas Rivera, Junot Díaz, Julia Alvarez, Cristina Garcia, Isabel Allende, Carlos Fuentes, Roberto Bolano, Gabriel García Márquez, Paulo Coehlo, Pablo Neruda, Gabriela Mistral, and many others have brought national and global attention to Pan-American writing. The depiction of the human experience in Pan-American writing resonates with as much viscera, and is as thought provoking, as Anglo canonical literature, and in many cases far more.

Though Pan-American writing is growing among readers, there is work to be done at the local level to ensure a foothold within academic and popular culture. Chicago is the third largest city in the U.S., and according to the Pew Research Center it has the fifth largest (and growing) number of Latinos in the U.S. behind Los Angeles, New York, Houston, and Riverside. The are many literary institutions in Chicago that serve to promote literature and writers, but I challenge those institutions to be more inclusive of the poets and writers who reflect the growing demographics in Chicago—Latinos.

The work I do online is similar to the work I do in real life. I moved to Chicago in the summer of 2015. In the last year, I started a salon-style reading series aimed at featuring Latino writers. The series is run out of my home in Logan Square, Chicago. It’s called Logan’s Run. The series has featured poets and writers from the city and around the country, including David Campos, Wendy C. Ortiz, Joanne Diaz, Diana Pando, Diego Baez, and many others. There are many literary readings in Chicago and as the birthplace of Poetry magazine, there certainly aren’t a shortage of poets.

I’ve learned that the Latina/o scene in Chicago is marvelous. Pioneers like Sandra Cisneros, Achy Obejas, and Ana Castillo have blazed a trail for Latina/o writers. Over the last several years, Chicago literary organizations like Chicago Latino Writers Initiative, Proyecta Latina, and The Guild Literary Complex have created programming to feature local and national Latino writers. Ten years ago Mary Hawley, with co-founder Francisco Aragon, started Palabra Pura. Palabra Pura is a monthly, bilingual reading series focused on writers of the Latino community. Despite the efforts of these organizations, there has been minimal coverage in media of the work they do.

DP: Why do you think that is?

RQ: It is not for a lack of events that include Latino writers in Chicago, or Latino-focused events in Chicago. There is, simply, minimal coverage of Latinos in the Chicago literary scene. Marketing and promotion of events to readers and viewers beyond the Latino community rarely happens. Perhaps, it is because most media is run by and for middle class writers and artists. Three areas/neighborhood in Chicago (Pilsen, La Villita, and Paseo Boricua) host a wealth of events focused on Latino and Latin American culture. While many of these events take place year-round, Anglo media gives minimal attention to their presence. Of course, as a result, small Latino-run media steps in for promotion and marketing of events. Subsequently, what happens is that media “preaches to the choir” instead of illuminating Latino culture for an entire city populace.

Isn’t this always the case? People often don’t look beyond or past their own community (herd behavior) until it is necessary or until someone points them in another direction. Herd behavior is necessary in social media and marketing, and it is no different when it comes to the promotion of Latino events in Chicago, or in the nation. It is difficult to challenge the herd. The herd is needed to sell products, acquire magazine subscriptions, and ensure the longevity of a product. Think about the longevity of Poetry magazine and the community of writers it published for decades and those who make up its Board. For decades, Poetry was an Anglo-focused magazine whose gates were held by white editors with a narrow-definition of poetry. Today, the magazine’s editors understand that its readership encompasses all types of people. There is an audience for all types of poems. There is a herd awaiting all kinds of art. There is no need to be a gatekeeper whether it is through the medium of publication or through the promotion of a particular literary event in a newspaper. It will take a long time for institutions to change and accept Latinos as an integral part of the literary community. Sometimes, though, a little push from Latinos and its allies doesn’t hurt to make the change happen a little faster.

DP: I sometimes feel like the thing millennial Latino writers and readers lack is the DIY mentality of, say, something like the AAWW. Among young Latino writers I know, there’s a certain longing to be apart of the establishment—to win the big awards, to go with a NY publisher (over Arte Publico or something indie), to get in the New Yorker. What I admire about AAWW is that in a sense, they went full punk rock and created their own system, their own network of writers, mentors, and creatives. How do we build that? Does it start with the AWP Latino Caucus? Does it start in Chicago? Online?

RQ: Many authors have a longing to be a part of an established system, like a Big 5 Publisher or a classic literary magazine, but those systems and magazines all had their start and some will eventually meet their end. It’s longevity that matters.

There are many literary systems, we, Latinos have created, built, and rebuilt. The DIY mentality does exist within the Latino community. We have created our own systems to feature and celebrate the work we do. Some literary magazines include La Bloga, Huizache, As/Us, Raspa, Acentos Review, and presses and literary series like Tia Chucha, Arte Publico, Korima Press, Noemi Press, Camino del Sol, Nuestra Palabra, and Words on a Wire are thriving.

You’ve hit the nail on the head. I’ve always been a believer of the DIY mentality. I believe we can build our ideas upon existing systems to secure a foothold within the literary establishment. Across the U.S. organizations like Macondo, Con Tina, Letras Latinas, and CantoMundo have nurtured and fostered a community of writers and readers for almost two decades.These organizations have created a network of writers and mentors. An already exisiting framework, like AWP, can serve the needs of the diverse community of Pan-American writers. The permanent establishment of the AWP Latino Caucus in the next couple of years will provide a space for these Latino-focused organizations to come together and connect.

Outside of AWP, we connect online. Together we can achieve great things.