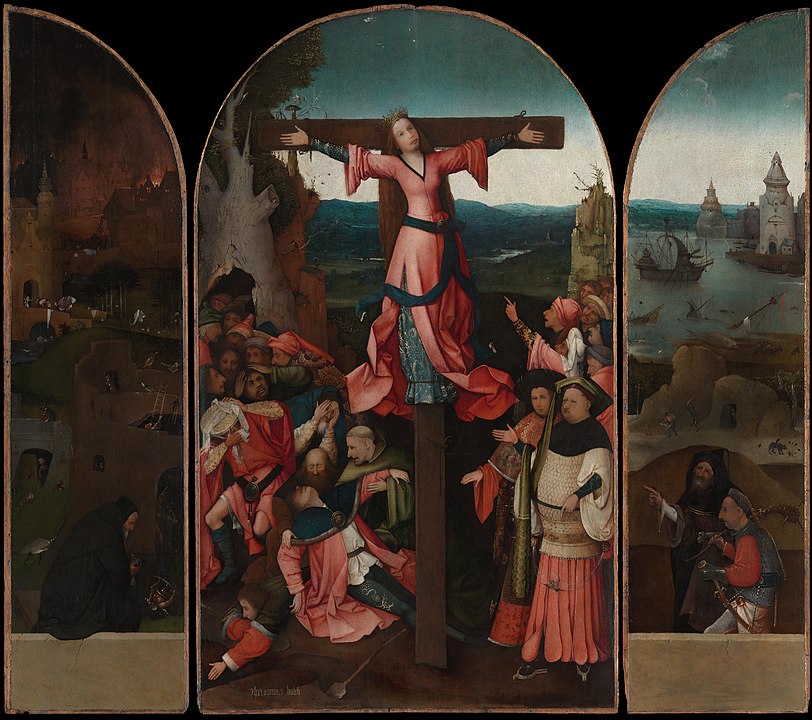 Emily Dickinson is known as a poet of interiority. With her signature pauses and unconventional syntax, she deftly navigates the biggest questions within the smallest moments. Reckoning with extreme psychic suffering, her poetic speakers repeatedly confront the boundary between unknowable interior experience and intelligible linguistic testimony. Dickinson guides readers into that boundary-space and contemplates how it might crack open, how we might bear witness to each other’s pain.

But why bother with this trouble of bearing witness? How can it even be possible to “witness” that which is inherently invisible? In working with these questions, one of Dickinson’s most striking recurring images is that of crucifixion. None of her poems are categorically devotional in the traditional sense of the term, but instead, the Christian salvation narrative serves her poetic project in unconventional ways, both framing and illuminating her explorations of interiority and suffering.

In “I measure every Grief I meet,” the speaker considers other people’s pain and wonders how it compares to her own experience. The poem suggests that although direct knowledge of another’s experience is a futile goal, it can still be fruitful to dwell on the thought that others have similar interior lives, that they contain pain with real depth and substance. In the final two stanzas, Dickinson writes:

Here, complexly imagining the varying griefs of others—“the fashions of the Cross”—comforts the speaker as she bears her own. The translation from witnessed grief to internalized comfort is not a kind of Schadenfreude and not quite an affirmation of collective suffering either. Instead, it occurs in a seemingly paradoxical operation: “A piercing Comfort it Affords / In passing Calvary—” with “Calvary” referring metonymically to the crucifixion (Calvary is the name of the hill on which the event is supposed to have taken place). The twinned phrases “piercing Comfort” and “passing Calvary” both strike dissonant chords. How can comfort be “piercing”? How can Calvary, a narrative meant to open up into eternity, be “passing”?

“A piercing Comfort” perhaps is that which can break through the barrier of interiority, the experience of essential conscious isolation. Here, comfort requires a kind of undoing, not in the sense of harm but in the sense of passing from disorder to reorder, turning into something new. Then, the notion of “passing Calvary” implies bearing witness to the pain of others as they are within human timelines, resisting the traditional Christian tendency to think of the crucifixion as a fixed point in a narrative arc that goes from “Fallen” to “Saved.” These lines instead reflect a sense of grace continually emerging within lived experience; the speaker is seeing grace as something repeatedly renewed and reintegrated over time, rather than accepted and remembered as a one-time event in the past.

In a similar tone, the poem “One Crucifixion is recorded — only —” also expands upon this theme of witness and grace. It begins: “One Crucifixion is recorded — only — / How many be / Is not affirmed of Mathematics — / Or History —”. On the literal level, it is certainly true that an uncountable number of individuals suffered execution by crucifixion during the time it was used by the Roman Empire. But here, again, the sense of multiple crucifixions also means that the pain of individuals contributes to the compounded weight of total human-divine suffering. The poem continues:

Perhaps every single person’s interiority is part of this conception of what it means to witness or inhabit “Calvary.” In “Tender Pioneer: Emily Dickinson’s Poems on the Life of Christ,” Dorothy Huff Oberhaus more thoroughly unpacks this portion of the work, noting that the lines “Gethsemane — / Is but a Province — in the Being’s Centre —” also lie in the literal center of the poem, the supposed intersecting point of the cross’s beams. She adds that “Province” is also “a verbal play”; rewording the third stanza’s point, she writes: “one does not have to journey to the province of Judea because the province of suffering is within.” The final stanza seems to affirm this idea of the interior province: “Our Lord — indeed — made Compound Witness — / And yet — / There’s newer — nearer Crucifixion / Than That —”. What is “Compound Witness”? Is it the compounding of divine solidarity with human suffering? Is it compound in the sense that each person’s temporal suffering requires further witness every day? Dickinson and her speakers do not tend to answer such direct questions. Here, crucifixion as an image of ultimate vulnerability helps Dickinson to frame the ultimate poetic project: the attempt to bear witness to experience, to put it into words.

In Dickinson’s poems, to dwell in Calvary is not just to experience the capital-a Absolute, but to make it one’s own. In “Title divine — is mine!” the speaker calls herself “Empress of Calvary,” and in “I dreaded that first Robin, so,” she is similarly “Queen of Calvary.” Making the voices royal and contextually Christlike, these assertions of status reflect the radical possibilities for Dickinson’s speakers to bear witness to the convergence of individual and collective experience. In this sense, the poetic project is an ongoing practice of compound witness that compounds further with every poem; as a poet of interiority, Dickinson is also a poet of strangely cosmic grace.